Borein A (Hyatt Regency)
J. N. Ashby (Department of Chemistry, University of Georgia) and R. P. Ramasamy (College of Engineering, University of Georgia)
Nearly a third of the population in the United States suffer from high cholesterol. This condition approximately doubles one's risk of cardiovascular disease, which is the leading cause of death in the country. As such, increasingly cost-effective, robust, easy-to-use, and accurate methods of detection of cholesterol are necessary to curtail such health risks. A particularly accurate method for this includes enzymatic electrochemical detection; however, most electrochemical detection methods use enzyme-modified electrodes developed based on the physisorption of enzymes onto the electrodes. This approach does not result in high activity and severely limits the enzyme stability on the electrode. This can be mitigated by immobilizing the enzyme onto carbon nanotubes using molecular tethers. Our biosensor was fabricated using Cholesterol oxidase, from Streptomyces, immobilized on multi-walled carbon nanotubes (MWCNT) with 1-pyrenebutanoic acid, succinimidyl ester (PBSE) as a molecular tethering agent. The biosensor shows a linear detection region ranging from at least 0.03-0.5 mM and high selectivity against common interferents, such as glucose at less than five percent. 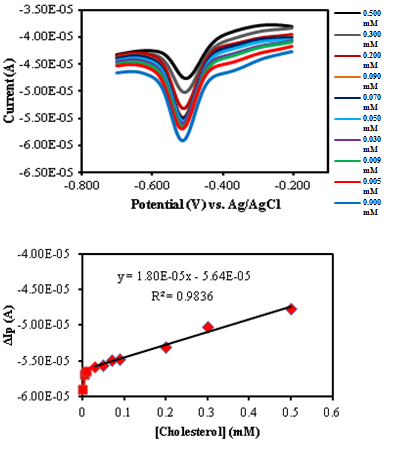