Phoenix East (Hyatt Regency)
Y. Zhou (Department of Chemistry, University of Georgia) and R. P. Ramasamy (College of Engineering,University of Georgia)
Bacterial pathogens are universally present in the environment and easily contaminate food and water to cause serious food-borne illness to humans. Detecting these pathogens in ultra low quantities is critical to prevent major outbreaks of food-borne diseases. Several approaches have been explored for detecting pathogenic bacteria in food and water of which electrochemical biosensors offer unique advantages including rapid detection, high sensitivity and easy-to-use testing procedure. However the specificity of detection and the cost of the biosensor heavily depend on the type and nature of the bio-recognition element used. Enzymes and antibodies are highly susceptible to environment and have low stability when used on electrodes. In this work, bacteriophage (virus) has been explored as an alternative bio-recognition element for the detection of pathogenic bacteria.  More specifically, a wild type T2 phage was utilized as recognition element for direct detection of Escherichia coli, ATCC 11303. The T2 phage was immobilized on carbon nanotube modified screen-printed carbon electrodes (SPE) using a molecular tethering approach developed by us.1 The binding of phage to the carbon nanotubes was verified by X-ray photoelectron spectroscopy (XPS) and atomic force microscopy (AFM). The phage-modified electrodes were used to specifically detect E. coli. Electrochemical impedance spectroscopy was used to detect the impedance variations resulting from the binding of E. coli to T2 phage. The phage-based biosensor showed high sensitivity towards the detection of E. coli and the controls in the absence of phage did not show any signal for the E. coli detection. 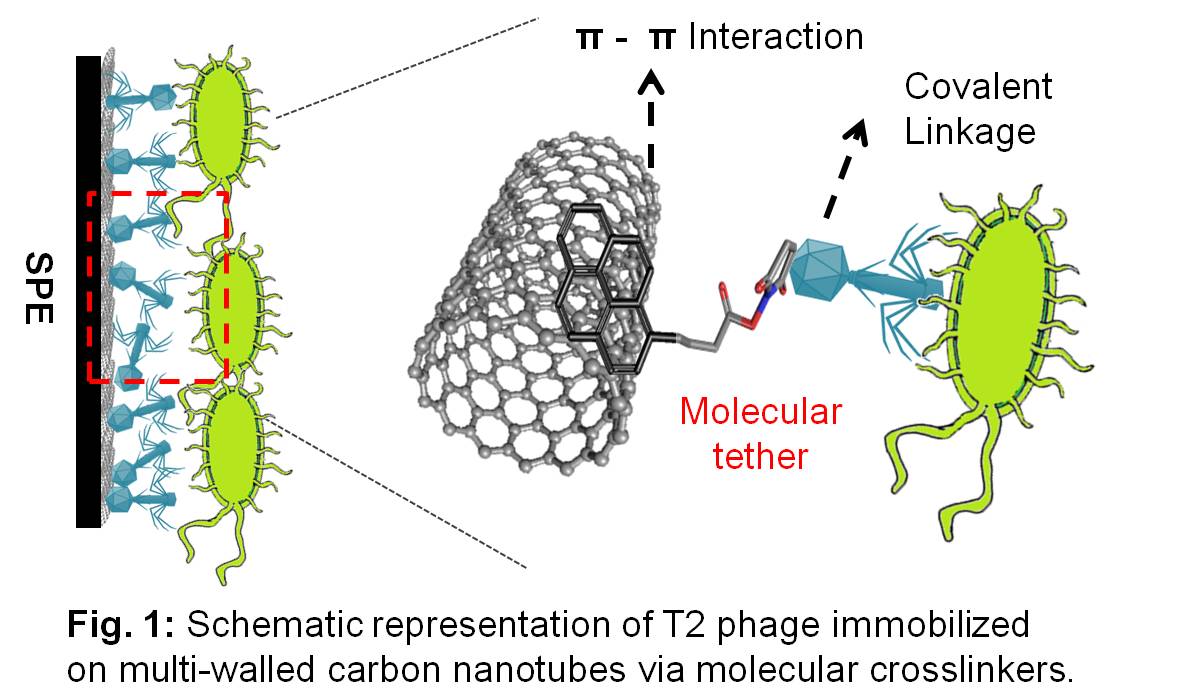