106-B (Phoenix Convention Center)
A. A. Riet, J. S. Sedgewick, J. E. Vogel, D. Clement, A. D. Cutler, B. A. Mazzeo (Brigham Young University), and D. R. Wheeler (Brigham Young University)
Accurately determining electronic conductivity of thin-film battery electrodes is not trivial, especially with the metallic current conductor still attached. A fast and reliable method would be of use for quality control and optimization purposes in battery manufacture, and would provide insight into the effects of changes in the fabrication process on the electrode structure.

We report a four-line probe that has been used to make high-resolution maps of local electrode conductivity on the micron scale. A computer-controlled apparatus allows precise control of pressure on the sample and positioning of the probe. A significant part of the work was developing a novel hybrid numerical-analytical model to invert the experiment, allowing a separate determination of film conductivity and contact resistance at the current collector in real time on a desktop computer. We will discuss the amount of local conductivity variation within representative electrode films.

This work was supported by the U.S. Department of Energy through the BMR program. 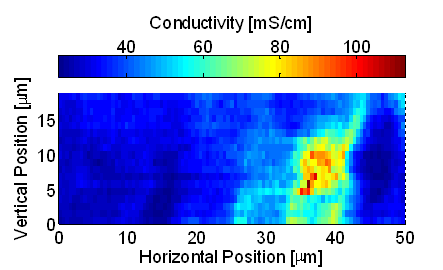