Grand Salon B - Section 12 (Hilton New Orleans Riverside)
Y. Li (University of Kansas) and T. V. Nguyen (The University of Kansas)
There has been growing interest in electrical energy storage because of the challenge of integrating intermittent renewable energy sources such as wind and solar into the electrical grid. The hydrogen-bromine reversible fuel cell system serves as a promising technology to meet this need because of its high round-trip conversion efficiency and low cost. Since the commonly used catalyst, platinum, is not stable in the corrosive HBr and Br2 environment, an alternative catalyst which is durable and active is needed. RhxSy catalyst has been found to be stable in the HBr/Br2 environment1,2.

The conventional synthesis of RhxSy/C has been developed by De Nora3, where (NH4)2S2O3 serves as sulfur source and XC72R is the carbon support. This kind of catalyst, however, has large and broad particle sizes (12-40 nm) and consequently low mass specific active area (< 10 m2/g) for HOR. Moreover, the exchange current density for the HOR/HER is also relatively lower than the commercial RhxSy catalyst from BASF, which can be seen from Figure 1. Other research groups4,5 have shown that smaller particle size can be achieved if preferable surface for precipitation of Rh cation is provided. Figure 2 shows the mass specific active surface area (ECSA) of the catalyst prepared with pretreated carbon and the commercial Rh2S3 synthesis process. In addition to the ECSA/mass enhancement, Na2S also serves as an appropriate sulfur source to modify the crystal structure of RhxSy, as shown in Figure 3. The modified crystal structure leads to improved exchange current density. This presentation will discuss the attempt to synthesize the RhxSy catalyst with pretreated carbon and Na2S. The characteristics and performance of this catalyst will also be presented.

The work presented herein was funded in part by the Advanced Research Projects Agency-Energy (ARPA-E), U.S. Department of Energy, under Award Number DE-AR0000262 and the National Science Foundation under Grant No. EFRI-1038234 and No. 1416874, as a sub-award from Proton Onsite. 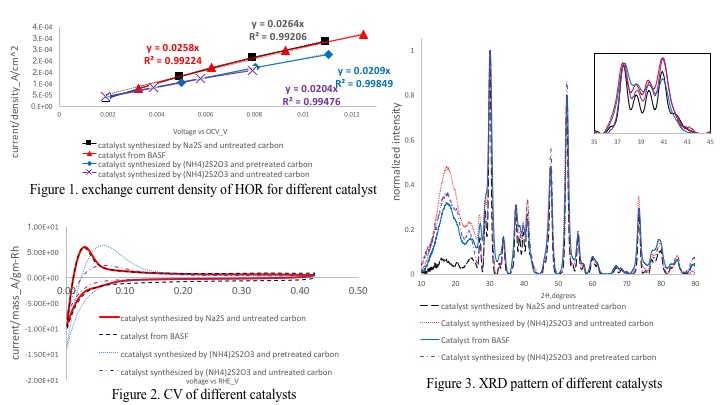