Grand Salon B - Section 12 (Hilton New Orleans Riverside)
J. W. Gallaway, G. G. Yadav, D. Turney, J. Huang, M. Nyce, S. Banerjee (CUNY Energy Institute at the City College of New York), J. Okasinski (Argonne National Laboratory), Y. C. K. Chen-Wiegart, G. Williams, and J. Thieme (Brookhaven National Laboratory)
This talk will discuss deep cycling of MnO2 as an aqueous, low-cost battery cathode material. Deep cycling is defined as reduction through nearly all of the theoretical capacity from MnIV to MnII, or 617 mAh/g-MnO2, while remaining reversible. MnO2 is one of the safest and most inexpensive battery materials ever discovered, and is well known in consumer primary batteries. In these cells MnO2 operates by proton (H+) insertion, but is not generally considered rechargeable due to a panoply of irreversible phase changes triggered during discharge.[1] Cycleability of Bi-modified δ-MnO2 was researched in the 1980s as a candidate cathode for electric vehicle batteries.[2-4] However, while this material can achieve thousands of cycles under certain conditions, performance is generally a strong function of several factors such as cycling protocol (e.g. galvanostatic vs. CV sweeps), active material mass loading, and electrode thickness. These last two, loading and thickness, can be quantified together by an areal capacity. Modeling indicates that areal capacities of >20 mAh/cm2have potential to result in high energy density aqueous, rechargeable batteries when paired with zinc anodes. These characteristics meet the requirements for a collection of emerging applications, namely grid-scale electrical storage.[5]

We have recently reported that high cycleability of Bi-modified MnO2 was achieved by further doping the material with other compounds.[6] Furthermore, this cycleability extends to high areal capacity electrodes. Figure 1 shows C/3 cycling of Bi-modified MnO2 cathodes, both with and without doping. Both electrodes had areal capacities of 21 mAh/cm2, produced from a cathode mix of 45% γ-MnO2, 9% Bi2O3, and 46% CNTs. While the undoped electrode lost significant capacity by the third cycle, the doped electrode achieved steady-state cycling after an initial conversion from γ-MnO2 to δ-MnO2during cycle 1. To establish the difference in mechanism between the two electrodes, a study was undertaken to observe the material conditions within the cathodes in operando.

Energy dispersive X-ray diffraction (EDXRD) data were collected at beamline 6-BM-A at the Advanced Photon Source. Figure 2 shows diffraction data within a doped Bi-modified cathode during the second cycle as a function of location within the cathode. Both δ-MnO2 and a modified bismuth material resembling the structure of Bi12MnO20 sillenite were observed.[7] The discharge products Mn(OH)2 and metallic Bi were observed in the ranges indicated. Reversible formation of spinel Mn3O4 was also observed, apparent from the (103) and (211) reflections. This finding was significant, as spinel formation is generally considered to be irreversible in alkaline batteries, and the source of non-rechargeability. This spinel was confined to the region near the separator, while Mn(OH)2and Bi were located throughout. Further experiments using localized XANES and X-ray fluorescence to track the dopant will also be discussed. These were performed at beamline 5-ID (SRX) at the National Synchrotron Light Source II. 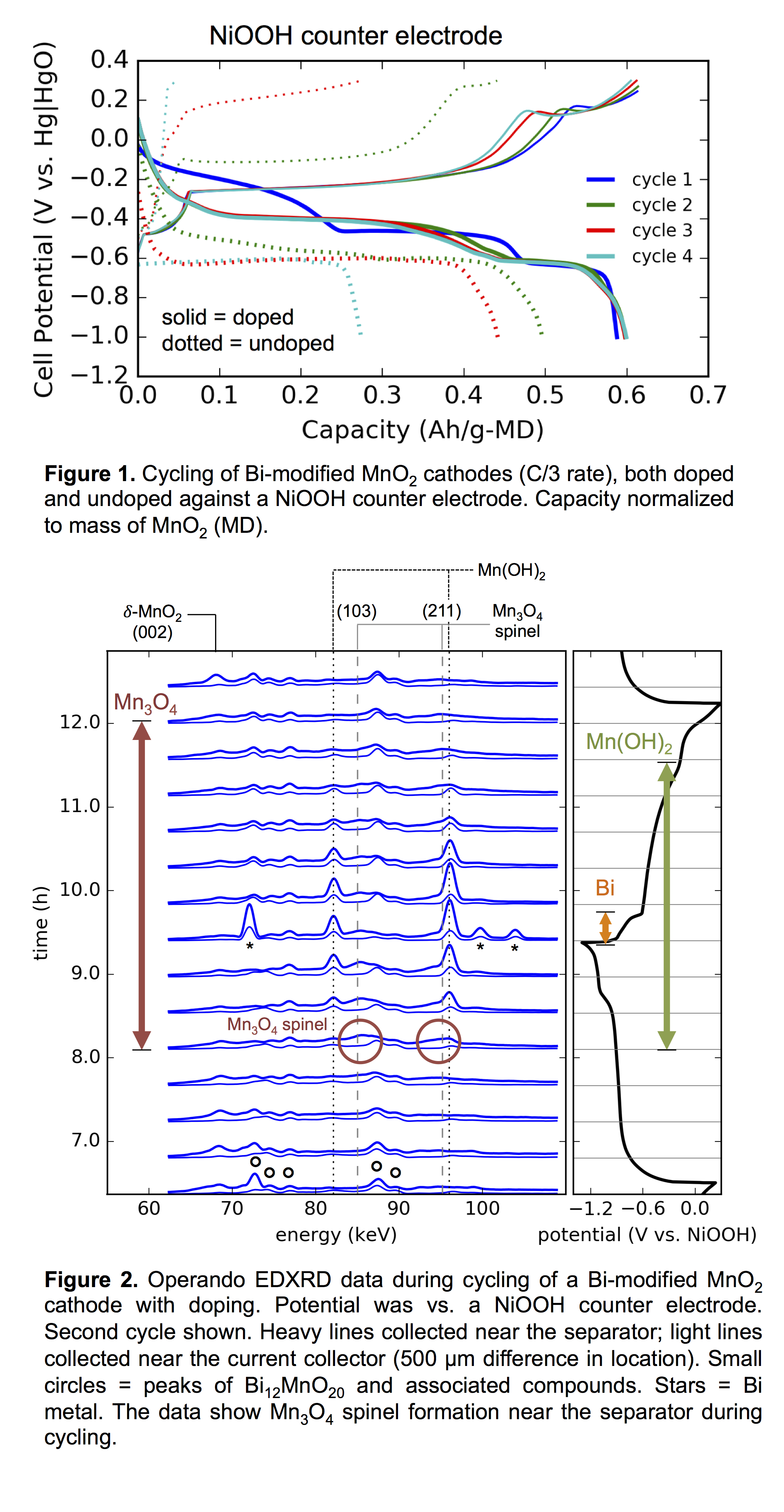