1942
Fabric Based Wearable Biosensor for Continuous Monitoring of Steroids

Grand Salon A - Section 4 (Hilton New Orleans Riverside)
P. Manickam, R. E. Fernandez, and S. Bhansali (Florida International University)
Technologies and devices for continuous monitoring of cortisol (or hydrocortisone) levels are increasingly important for use in a wide range of applications starting from endocrinology to military to sports, as it regulates many important pathophysiological functions [1,2]. Cortisol is a steroid hormone produced in adrenal glands, released in bio-fluids, in response to events and circumstances such as fear, stress, and exercising. Thus, the measurement of cortisol in the bio-fluids is an important tool for use in clinical diagnostics and in monitoring stress levels during stress-intensive activities. Conventional devices, such as cortisol flow immunoassays (FIA)[3], salivary cortisol assay kits[4], are available in the market and are capable of measuring cortisol levels in collected saliva/serum samples. However, such assay kits still suffer from tedious lab processing and the time associated therewith. Currently, affinity based biosensor prototypes involving antibodies and aptamers as recognition element to capture cortisol have been widely reported by researchers. However, there are many challenges associated with the affinity based assays that restricts commercialization. So there is a real need for developing catalytic sensor that would provide continuous monitoring of cortisol levels at clinical setting.

Porphyrins and their derivatives are highly conjugated heterocyclic macrocycle organic compounds. The macrocyclic structure of porphyrin can conjugate with many metal elements to form stable metalloporphyrins which has remarkable electrocatalytic, photocatalytic, and biochemical properties. Metallophorphyrins are known as bioinspired catalyst since they are the actual catalytic active site (prosthetic group) of important class of proteins and enzymes. Metalloporphyrins based catalytic sensors have been reported for the detection of sulphur ions[5], nitric oxide[6], nitrite[7] and have not been used for detecting cortisol. Cortisol ((11β)-11,17,21-Trihydroxypregn-4-ene-3,20-dione) is an unsaturated ketosteroid and containing keto group at 3rd and 20thposition. The reduction reaction of keto groups of the cortisol to hydroxyl group catalyzed by metalloporphyrins is utilized here for the direct detection of cortisol. The proposed technology involves the cladding of the catalytic biosensor with conductive textile/fabric to wick and transfer the sweat to the sensing surface to enable continuous monitoring of cortisol. The current response of the sensor was found to a strong linear function of cortisol concentrations in the range 50 pM-100 nM. Detection limit is found to be as low as 10 pM. The schematic representation of working principle of catalytic cortisol sensor is represented in scheme 1.

Scheme 1. Electrochemical pathway of reduction of cortisol at electrode for continuous monitoring. 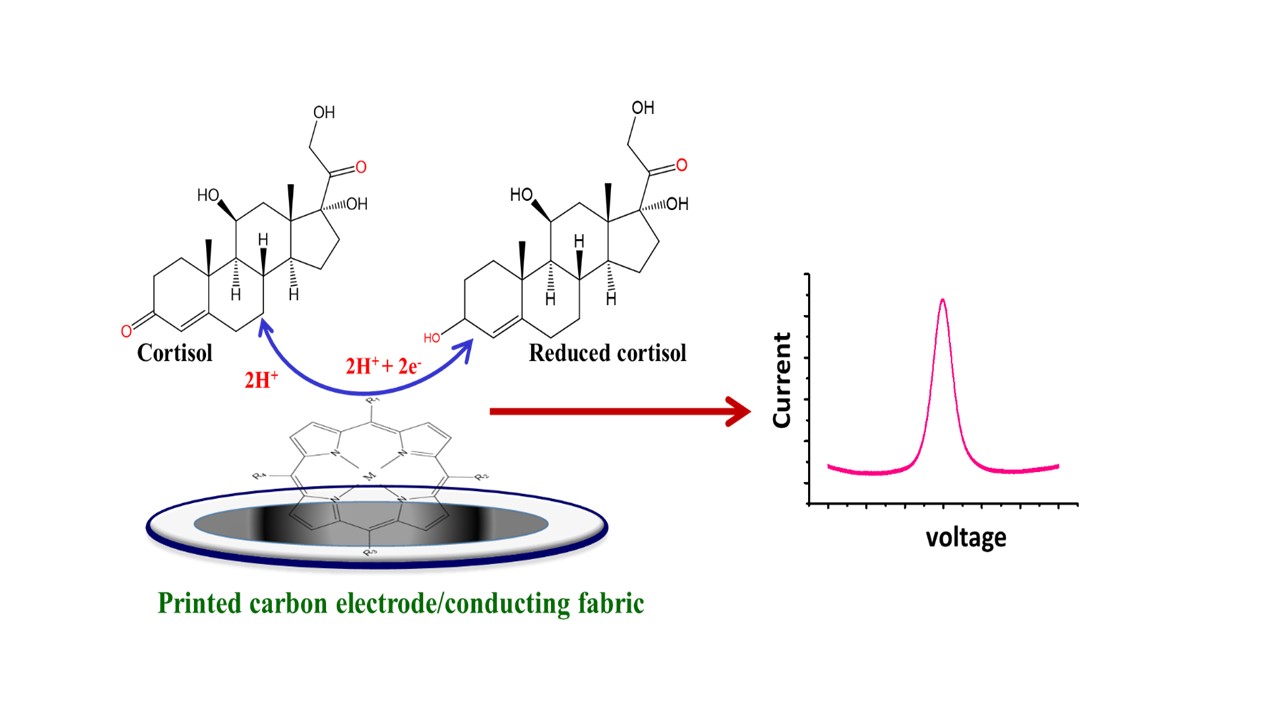