Churchill B1 (Hilton New Orleans Riverside)
F. Papadimitrakopoulos, E. Karunaratne, M. Mollahoseini, and J. Gascon (University of Connecticut)
One of the greatest challenges with single-walled carbon nanotube (SWNT) photovoltaics and nanostructured devices is maintaining the nanotubes in their pristine state (i.e. devoid of aggregation and inhomogeneous doping) so that their unique spectroscopic and transport characteristics are preserved. To this effect, the tight helical wrapping of flavin derivatives around SWNTs presents an ideal vehicle for individualizing SWNTs, while at the same time affording the incorporation a variety of substituents that can be brought within π-π overlap to the graphene sidewalls (Figure 1a). C60-functionalized flavin composed of PCBM and isoalloxazine moieties attached on either ends of a linear, C-12 aliphatic spacer forms a concentric assembly where transient absorption spectroscopy have shown the effective photoinduced charge transfer quenching of the encased SWNTs. In this contribution, we present convincing evidence on the exact location where the C60 moiety resides. As shown before1, the isoalloxazine helix is partitioned into a co-spiral electronegative uracil groove (Figure 1b) and an electropositive o-dimethylphenyl (phenyl) groove (Figure 1c). Spectroscopic investigation alongside with modeling of the diameter-dependence ESii redshifts suggests that the C60 moiety is solely localized within the uracil grooves (Figure 1b) due to improved electrostatic interactions. This indicates the profound assembly fidelity of FMN-wrapped nanotubes, which rivals that of biological helices. 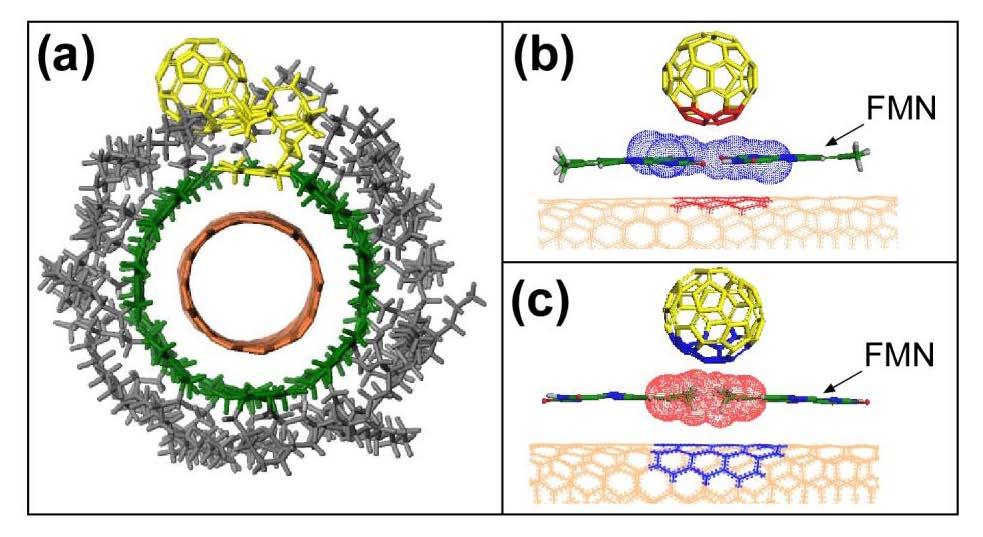