714
(Invited) On the Theory of Nanotube-Graphene Crossiton: A New Class of Topological Solutions

A problem of strong (aka non-perturbative) coupling between quantum systems has been in the focus of physics research for many decades, having both fundamental interest and value for applications from quantum information to spintronics. Most recently it received attention due to technological capability to couple electronic systems of different dimensionality, for example, one-dimensional (1d) to 2d-systems. Cross-dimensional excitation were shown here to form a new class of solutions of strongly coupled Hamiltonians.

We use the formalism of coupled Dyson equations, and propose an efficient method of obtaining a distinct family of non-perturbative solutions. It reproduces known ``polariton''-family in the limit of the same symmetry of the coupled systems. On contrary, when the symmetry of one system makes a sub-group of the other, and the coupling interaction preserves a sub-set of quantum numbers, like a wavevector along 1d-axis, a special class of solutions - crossiton - is found.

Green's functions (GF) of crossiton sub-modes can be expressed via GFs of uncoupled systems and interaction vertexes. The general crossiton Hamiltonian can be mapped on a wide range of quantum-mechanical problems (like Fano-Anderson problem) that, otherwise, are not obviously related. Such a solution, to the best of our knowledge, was not demonstrated before. We emphasize on that the problem is solved non-perturbatively, presenting full solution, beyond weak coupling model.

Fig. 1. Bare (dashed) and renormalized (solid) GF of the crossiton in the 1d-system. 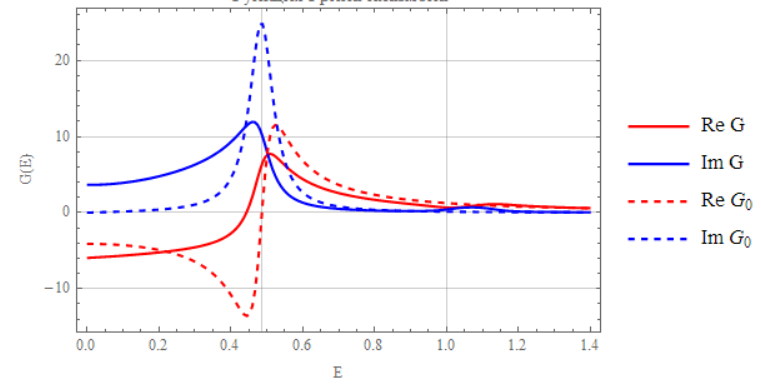