Grand Salon A - Section 6 (Hilton New Orleans Riverside)
K. Domen and T. Hisatomi (The University of Tokyo)
Water splitting driven by solar energy has attracted much attention as a means of renewable solar hydrogen production. Photocatalytic water splitting is a representative approach utilizing particulate semiconductors.1,2 When a particulate semiconductor photocatalyst absorbs a photon, an electron is excited from the valence band to the conduction band, and a positive hole is left in the valence band. These excited electrons and holes can drive reduction and oxidation reactions on each photocatalyst particle, respectively. A photocatalyst can split water into hydrogen and oxygen thermodynamically when the band gap straddles the potentials of the hydrogen evolution reaction (0 V vs. RHE) and the oxygen evolution reaction (+1.23 V vs. RHE); however, to drive the reaction efficiently, it is generally necessary to load nanoparticulate metals and metal oxides, denoted as cocatalysts, on the photocatalyst as active sites for the hydrogen evolution reaction and the oxygen evolution reaction. Note that it is also possible to split water using two kinds of photocatalysts for hydrogen evolution and oxygen evolution, respectively. Such a reaction scheme based on two-step excitation is called Z-scheme. A solar-to-hydrogen energy conversion efficiency (STH) of 5% or higher is considered to be necessary for practical operation of photocatalytic solar hydrogen production. To attain such a high STH at reasonable quantum efficiencies, it is necessary to activate and stabilize narrow band gap photocatalysts.2 Scalability of the system is also a critical issue.3  Water splitting systems based on particulate photocatalysts are promising in terms of scalability because they do not need any secure electric circuits and thus can be spread over a wide area easily.

In this talk, recent progress and future challenges in photocatalytic water splitting and system development will be presented. 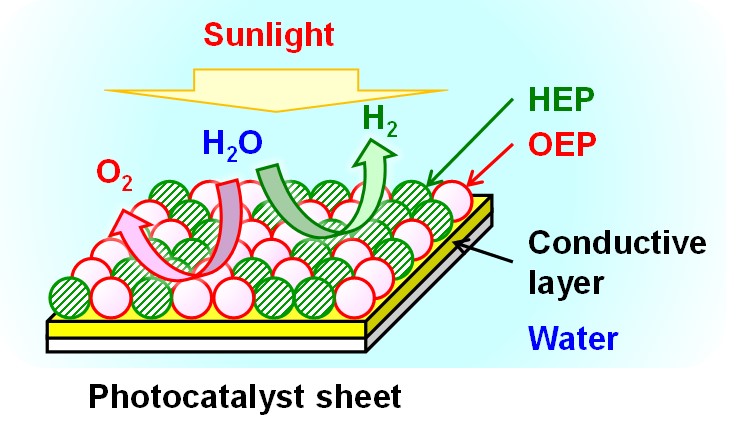