Grand Salon B - Section 10 (Hilton New Orleans Riverside)
D. Gerthsen, M. Meffert (LEM, Karlsruhe Institute of Technology (KIT)), H. Störmer, V. Wilde (LEM, Karlsruhe Institute of Technology, Germany), L. Almar (IAM-WET, Karlsruhe Institute of Technology (KIT)), F. Sigloch, L. S. Unger (IAM-WET, Karlsruhe Institute of Technology, Germany), S. F. Wagner, and E. Ivers-Tiffée (IAM-WET, Karlsruhe Institute of Technology (KIT))
The cubic perovskite-type (Ba0.5Sr0.5)(Co0.8Fe0.2)O3-δ (c-BSCF) is a material with mixed electronic-ionic conductivity and extraordinary high oxygen permeability which makes c-BSCF interesting for applications such as, e.g., oxygen separation membranes and cathodes in solid oxide fuel cells. However, applications are up to now hampered by the degradation of the oxygen permeability in the relevant temperature range between 700 and 900 oC. Particularly detrimental is the formation of the hexagonal (h-)BSCF phase below 840 oC [1]. Moreover, several other secondary phases were identified that are believed to also adversely affect oxygen permeation [2]. Secondary phase formation is connected with the multivalent B-site Co-cation which increases its valence state with rising temperature. Substitution of B-site Co-cations by monovalent transition metals, e.g. Y or Zr, is considered as a promising strategy to stabilize c-BSCF [3]. Another issue is related to the degradation of BSCF in CO2-containing atmospheres where the formation of carbonate precipitates on the surface [4] is accompanied by the reduction of the oxygen surface exchange coefficient [5]. In this work we will address the stabilization of c-BSCF by Y-doping and the effect of Y-doping on the degradation of the electrochemical properties in CO2‑containing atmospheres.

Bulk samples were prepared by the mixed oxide route with compositions of (Ba0.5Sr0.5)(Co0.8Fe0.2)1‑xYxO3‑δ (x = 0 and 0.1, BSCF and BSCF10Y) which were subjected to annealing for 240 h between 640 oC and 880 oC in air. In addition, symmetrical cell samples with porous BSCF and BSCY10Y layers were fabricated by screen-printing on both sides of Ce0.9Gd0.1O2-δ (CGO) substrates. The samples were in-situ sintered at 900 °C for 10 h and electrochemically characterized by electrical impedance spectroscopy (EIS) at 700 oC in synthetic air with CO2-concentrations up to 3 %. Distribution of relaxation time (DRT) curves and area specific resistances are derived from EIS data which allow to monitor degradation processes. We use scanning electron microscopy (SEM) and analytical (scanning) transmission electron microscopy ((S)TEM) combined with energy dispersive X-ray spectroscopy (EDXS) to study the structural and chemical material properties. Different phases in bulk samples are visualized by SEM imaging using the specimen preparation procedure outlined in [6].

Fig. 1 shows SEM images of bulk BSCF and BSCF10Y after annealing at temperatures between 640 oC and 880 oC for 240 h. Inserted schemes illustrate secondary phase formation. BSCF (Figs. 1a‑c) contains a large volume fraction of secondary phases comprising Co3O4, Ban+1ConO3n+3(Co8O8) (n ≥ 2) (BCO) and h-BSCF depending on the annealing temperature. Secondary phase formation in BSCF10Y is completely suppressed at 880 oC. Only small volume fractions of h-BSCF are detected at grain boundaries after annealing at 760 and 640 oC.

Fig. 2 presents DRT curves of BSCF/CGO/BSCF and BSCF10Y/CGO/BSCF10Y cells at T=700 °C before and after 1 % CO2 addition for 50 h. A signal at 100 Hz increases strongly in BSCF/CGO/BSCF (Fig. 2a) which is absent before CO2 addition. The same signal is present in BSCF10Y/CGO/BSDF10Y (Fig. 2c) but with a significantly lower amplitude. SEM images show a high density of small precipitates on the surface of BSCF (Fig. 2b) which are present in a much smaller concentration on BSCF10Y (Fig. 2d). The small precipitates are absent if annealing is performed without CO2. We note that the 100 Hz signal disappears after switching off CO2 indicating that the origin of the process at 100 Hz could be related to CO2-adsorption. 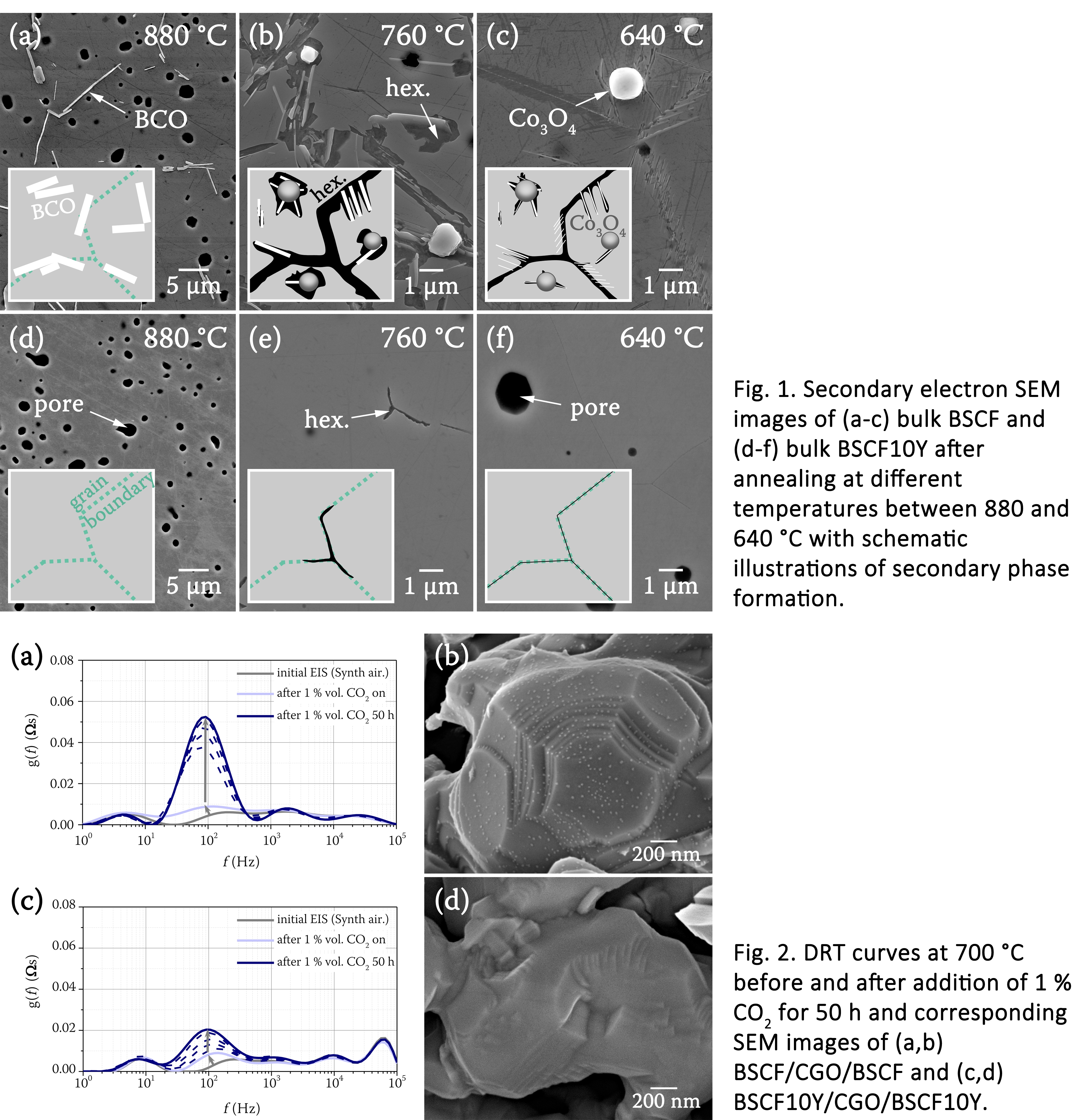