An economically competitive CIPEC device type in terms of irradiation concentration (C) and current concentration (F) was predicted using our holistic design guidance methodology discussed in [1]. For this device type (C=800, F=6.25), we detailed the design of a lab scale CIPEC prototype. The design followed the design guidelines which we formulated based on our 2D coupled multi-physics CIPEC numerical model presented in [2]. The model accounted for charge generation and transport in the multi-junction solar cell and the components of the integrated electrolyzer (polymeric electrolyte and solid electrode), electrochemical reaction at the catalytic sites, fluid flow and species transport in the channels delivering the reactant (water) and removing the products (hydrogen and oxygen), and radiation absorption and heat transfer in all components. The rendering of the device design is depicted in figure 1.a.

The prototype incorporates Ga0.51In0.49P-GaAs dual junction (from CESI S.p.A.) PV component working at an irradiance concentration of 800. The LRESE high flux solar simulator (figure 1.b) is used for providing large irradiation concentrations (C=500-1000) [3]. The prototype incorporates smart thermal management strategies allowing for controlling of the operating point. The predicted solar-to-hydrogen conversion efficiency is as high as 20% [2]. Large irradiation concentration reduces the H2 cost, estimated to be around 1.5 $/kg of H2 at the exit of the device [1]. The prototype incorporates a PV area of 4 cm2 and an electrolyzer area of 25 cm2. The input power of the device is 320 W with an estimated H2 production power of 64 W, making the largest-power device demonstration to date. The CIPEC demonstrator is expected to generate hydrogen at a rate of 1.62 g/hour. We will present the successful operation of the prototype and report on measured performance indicators.

The prototype demonstrates an efficient and cost effective way of solar hydrogen processing and provides data for the validation of the 2D multi-physics model. The model proves to be an accurate tool for the design of concentrated integrated photo-electrochemical cells working at elevated temperatures and, in combination with the experiments, highlights that the smart thermal management can help in achieving low cost production of solar fuel at fast rates. 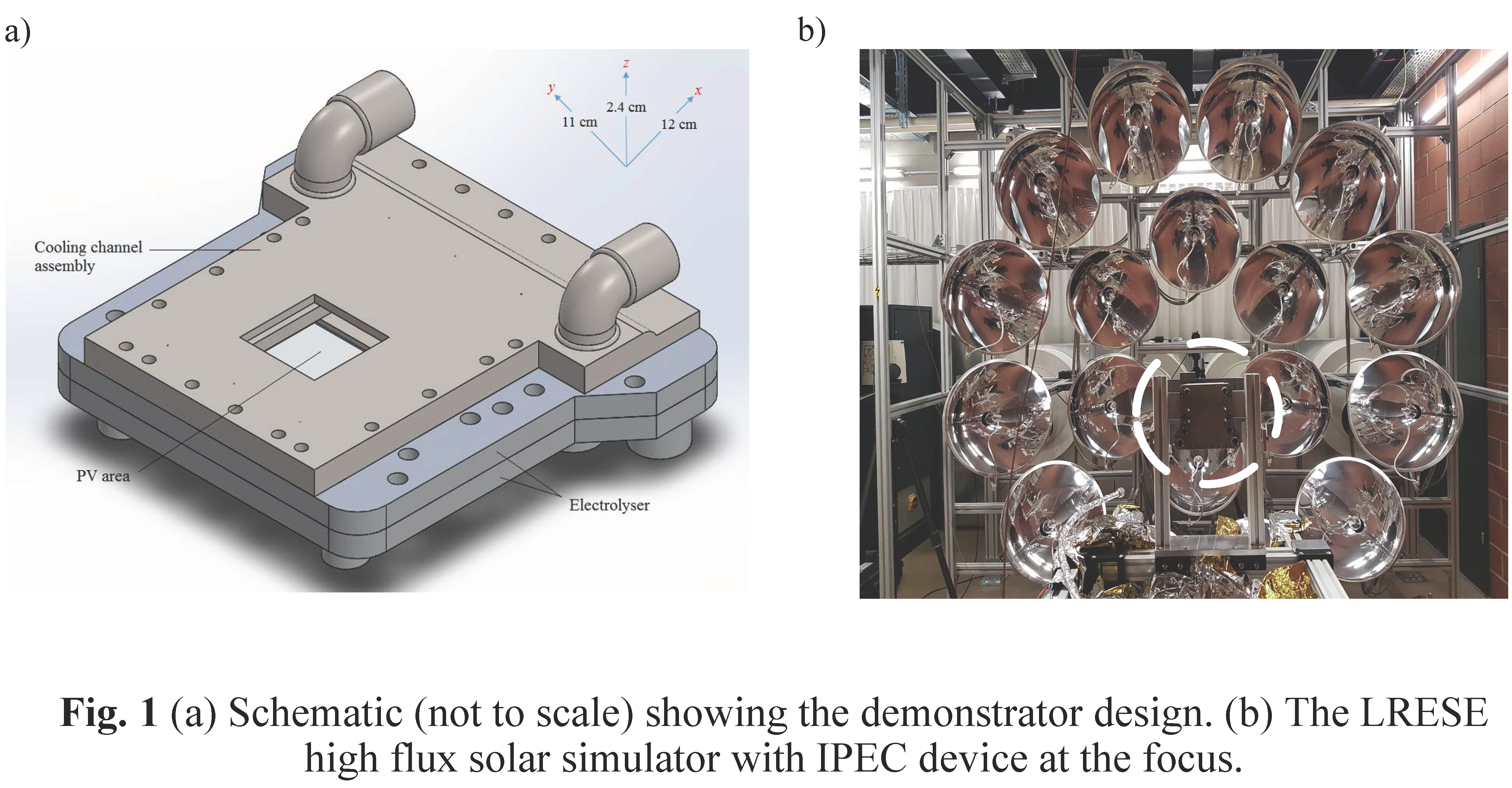