950
Corrosion Behavior of Ti and Zr in HF

Grand Salon D - Section 22 (Hilton New Orleans Riverside)
M. S. Amrutha and S. Ramanathan (Indian Institute of Technology, Madras)
Titanium and zirconium are used extensively in the industry due to their exceptional corrosion resistance in most of the harsh environments [1, 2]. Ti is used in aerospace industry, biomedical implantations, and in several chemical industries due to its low density, high mechanical strength and corrosion resistance [1]. Zr is mainly used as a fuel cladding material in nuclear industries and in chemical industries due to its high resistance to corrosion and H2embrittlement [2]. Although these materials exhibit high corrosion resistance in harsh acidic and alkaline environment, they readily dissolve in acidic fluoride media. The anodic polarization curves of Ti and Zr in HF [3,4] show that the active and passive regimes are clearly distinguishable . A comparison of these results also shows that Ti offers better passivation than Zr, in HF media.

HF is a weak acid and it forms multiple species in aqueous solutions. The concentration of these species was correlated and it is difficult to delineate the contribution of each species towards the corrosion current. Hence few experiments with addition of KF/H2SO4 were also carried out. The corresponding changes in the open circuit potential and corrosion current estimates were also analyzed. The concentration of various species, viz. remaining HF, H+, F-, HF2- and H2F3-, in the solution were calculated using the equilibrium constants [5]. The value of the polarization resistance (Rp) was calculated from the slope of linear polarization data. Electrical equivalent circuit fitting was used to calculate the polarization resistance from EIS spectra. The corrosion current was estimated using the values of Rp in all solutions. The values of the corrosion current estimated from the different techniques were compared. The correlation between the corrosion current and various solution species was also analyzed. The results indicate that the corrosion current is proportional to and where α and β are close to the exponents obtained from the mechanistic analysis of the polarization curves [3, 4]. The morphology of the electrodes after the passivation was studied using atomic force microscopy (AFM) and it shows less roughness compared to the active region of dissolution. The AFM images showed lesser passivation for Zr metal compared to Ti. These observations provide insight to the difference in the corrosion prevention of the two metals regardless of the same group in the periodic table. 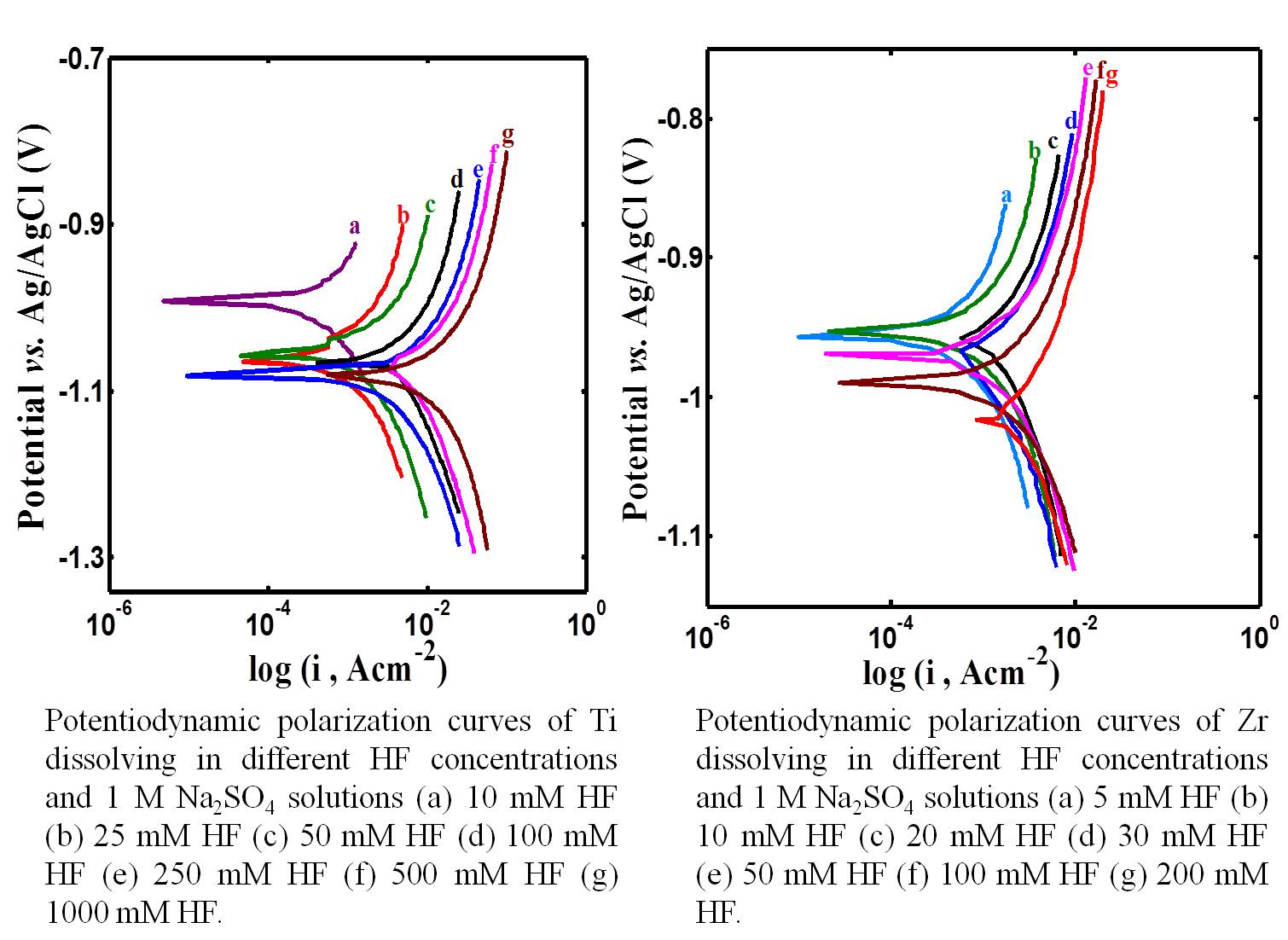