Grand Salon D - Section 22 (Hilton New Orleans Riverside)
S. A. Policastro, R. Anderson, and C. Hangarter (U.S. Naval Research Laboratory)
The oxide on titanium is generally considered to behave as a semiconductor with a band-gap of approximately 3.1 eV. The interface between the oxide and the electrolyte can be envisioned in the semiconductor energy level diagram in Figure 1 and semiconductor properties of the oxides, such as the band gap, the flat band potential, and the dielectric constant, can be obtained from electrochemical impedance spectroscopy and Mott-Schottky tests. However, kinetic information, especially regarding reduction reactions occurring at the oxide surface is missing from these measurements. One approach for probing the catalytic properties of the oxide is to use IMPS to excite photoelectrons and measure the resulting oxide electrochemical response.

A kinetic model of the oxide behavior in response to photo-excitation was developed following the Ponomarev-Peter approach and was used to predict charge transport in the oxide band structure. From the band diagram in Figure 1, it can be supposed that incident photons, with energy greater than the band gap, will excite electrons from the valence band into the conduction band, leaving positively charged holes behind. Once in the conduction band, some of the electrons recombine with the holesand are lost while the majority will be transported through the external circuit to the counter electrode. Only a few will be able to travel to the interface to participate in a reduction reaction. The valence band holes, on the other hand, have much lower mobility than the electrons and, those that are not extinguished due to recombination, will reach the oxide-electrolyte interface and help drive water oxidation or other available reactions. Fitting the model parameters to the measured photo-electrochemical responses of the oxides provides a way to compare the effectiveness of the oxides to catalyze reduction reactions.

This work was sponsored by the Office of Naval Research, ONR, under grant/contract number N0001415WX00948; the views and conclusions contained herein are those of the authors and should not be interpreted as necessarily representing the official policies or endorsements, either expressed or implied, of the Office of Naval Research, the U.S. Navy or the U.S. government. 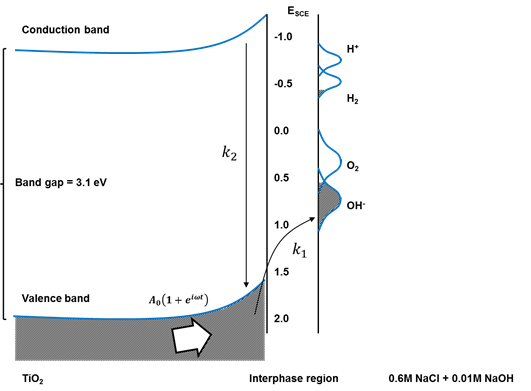