Grand Salon B - Section 10 (Hilton New Orleans Riverside)
Y. M. Hajar, M. S. E. Houache, U. Tariq (University of Ottawa), P. Vernoux (CNRS-IRCELYON), and E. A. Baranova (University of Ottawa)
Electrochemical promotion of catalysis (EPOC) or non-faradaic modification of catalytic activity (NEMCA) is a general phenomenon observed at the interface of solid-state electrochemistry and heterogeneous catalysis [1,2]. When the metal or metal oxide catalyst is interfaced with ionically conductive ceramic (solid electrolyte), the application of small electrical stimulus (current or potential) between the catalyst and a counter electrode results in occurrence of two parallel processes: (i) electrochemical reactions at the three phase boundary (tpb) and (ii) spillover/backspillover of ionic species to/from the solid electrolyte to the gas exposed catalyst surface. These ionic species act as promoters for the catalytic reaction and the promoted rate increase is several orders of magnitude higher than one predicted by Faraday’s law. The two most common promoters are Na+ cation from β″-Al2O3 and O2-anion provided from yttiria-stabilized-zirconia (YSZ) electrolyte. The existance of these ionic promoters was confirmed by a variety of surface science and electrochemical techniques [1].

The application of EPOC to nanoscopic, highly dispersed catalysts is of significant interest and represents one of the main challenges for practical application of this phenomenon [2, 3]. The goal of the present work is to investigate EPOC with Pt and Ru nanoparticles (2.5 nm average size) interfaced with YSZ (8% Y2O3-ZrO2) solid electrolyte for ethylene combustion reaction at T= 220 – 375 oC. To this end, the nanoparticles of Pt and Ru were synthesized using polyol method [4] and deposited on YSZ disk. Nanoparticles were subject to detailed electrochemical characterization to find the exchange current (Io) of electrochemical process at tpb and to link it to the apparent faradaic efficiency, |Λ| (eq. 1) and (2) defined in EPOC studies as [1]:

where Δr (mol O/s) is the increase in the catalytic rate divided by the electrochemical rate, ro is the open circuit reaction rate, I/nF (n = 2 for O2-). The process is considered non-Faradaic if |Ʌ|is greater than 1.

Figure 1 shows the transient reaction rate response of ethylene combustion over Pt nanoparticles under open circuit (U = 0 V) and under positive potentiostatic polarization (U = 0.5V) at 350 °C. Under closed circuit, the significant and reversible increase in the reaction rate is observed with the rate enhancement ratio r (ratio of the rate under closed circuit over the rate value at the open circuit) reaching 1.79 (i.e. 79 % increase) and the corresponding Faradaic efficiency, Ʌ, value of 23. This indicates that each O2-ion supplied to the Pt catalyst causes on average the catalytic reaction of 23 adsorbed O species originating from the gas phase. The effect of the applied constant potential and current, as well as partial pressure of ethylene, reaction temperature on EPOC effect for both Pt and Ru nanoparticles will be presented. The role of electrified nanoscopic interfaces on the extent of the rate increase will be discussed and rationalized using the exchange current density values [5]. 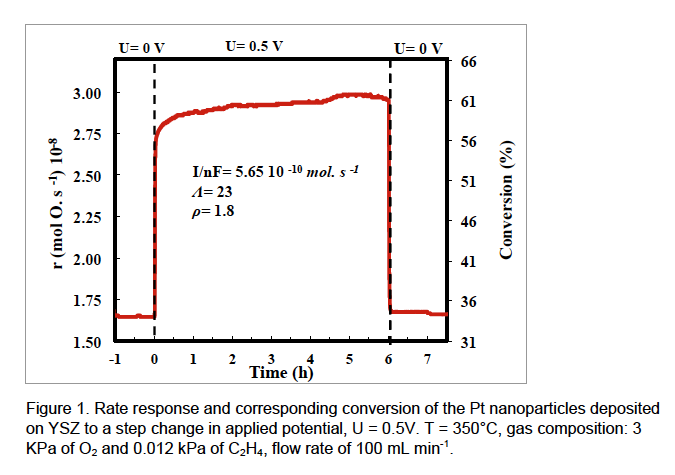