Grand Salon C - Section 15 (Hilton New Orleans Riverside)
X. G. Yang and C. Y. Wang (Electrochemical Engine Center, Pennsylvania State Univ.)
Cycle life is critically important for applications of lithium-ion batteries (LIBs). Numerous models have been proposed in the literature to predict the life time of LIBs (1, 2). Most of these models focused on growth of solid-electrolyte-interphase (SEI), which leads to capacity fade that is proportional to the square root of time, and the aging rate increases with cell temperature by following the Arrhenius law. Several recent experimental studies, however, reported aging behavior that cannot be explained by, at least not solely by, SEI growth. For instance, Waldmann et al. (3) cycled a set of 1.5Ah graphite/NMC cells at different temperatures, and found that the cell at 25oC had the longest life. Plotting cell aging rate with reciprocal temperature, they observed a transition of activation energy from a positive value at T>25oC to a negative value at T<25oC, indicating a transition of dominating aging mechanisms. The main aging mechanism at T>25oC is SEI growth, and at T<25oC is believed to be lithium plating, i.e. deposition of metallic lithium on graphite surfaces. The lithium deposition reaction directly reduces cell capacity by consuming active lithium. In worst-case scenarios, the plated lithium can pierce the separator, induce internal short circuit and cause catastrophic consequences. Research efforts on the effects of lithium plating over cell aging are rather limited in the literature, especially in terms of numerical modeling. In the present study, we present a comprehensive LIB aging model with incorporation of both SEI growth and lithium plating. The model can well capture the recently discovered LIB aging behaviors associated with lithium plating. In addition, the relative contribution to cell aging by SEI growth and by lithium plating can be quantified for cells at different operating conditions with different design parameters.

Figure 1 shows the variation of cell capacity with cycle number for a plug-in electric-vehicle (PHEV) LIB with energy density of 170 Wh/kg cycled at 25oC with 1C charge and 2C discharge. At this moderate operating condition it is usually believed that lithium plating is not a concern. However, we found in our experiment that cell capacity dropped abruptly after ~3000 cycles, which is in consistence with the recently reported nonlinear aging behavior by Schuster et al. (4). The model presented in this study well captures this nonlinear behavior, as shown in Fig. 1a, and this abrupt drop in cell capacity is attributed to the rapid rise of lithium plating rate after extended cycling as shown in Fig. 1b.

The model is then applied to predict the cycle life of the above PHEV cell at different ambient temperatures, as shown in Fig. 2a. It is found that the cell at 20oC has the longest cycle life. Either increasing or lower the temperature would accelerate cell aging. These results are in accordance with the recent experiment findings by Waldmann et al (3).

The effects of electrode thickness on the cycle life are also investigated, as shown in Fig. 2b. These cells are cycled at 25oC with 1C charge and 1C discharge. Even at this moderate operating condition, cells with thicker electrode have much poorer life as shown in Fig. 2b, which is because lithium plating is more prone to occur with the increase of electrode thickness. This result has a profound implication on high-energy, thick-electrode cells for all electric vehicles (EV).

Details about the model development, and about the effects of cell design parameters and operating conditions on cell aging due to lithium plating will be given in this presentation. Finally, we shall propose some novel strategies to significantly extend the cycle life and increase fast rechargeability of energy-dense EV batteries. 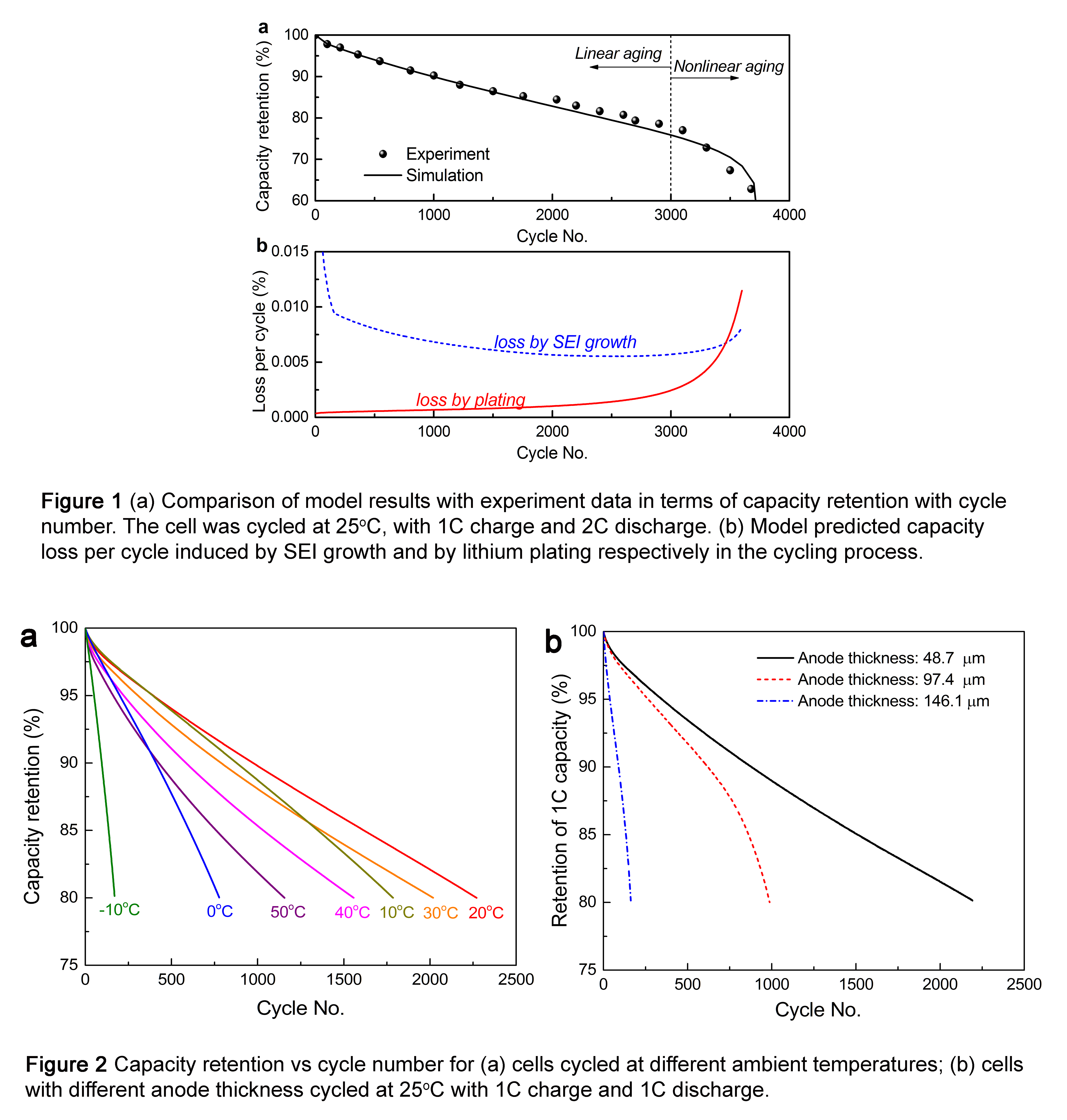