Grand Salon A - Section 3 (Hilton New Orleans Riverside)
M. Bernt (Bayerisches Zentrum für angewandte Energieforschung, Technical University of Munich), M. Singer, and H. A. Gasteiger (Technical University of Munich)
PEM water electrolyzers are promising candidates for large-scale energy storage in combination with renewable energy sources. Typically, high loadings of platinum group metal (PGM) catalysts are used, but since most currently installed systems are relatively small (kW range), catalyst costs are minor compared to other system costs. However, for large-scale applications, the contribution of balance-of-plant costs will be much lower and catalyst costs will become a major cost contributor [1]. Increasing prices due to a higher demand of PGMs might further amplify this trend in the future [2]. Therefore, a reduction of catalyst loading is essential to improve the economic competitiveness of PEM electrolyzers.

There have been efforts to reduce PGM loadings, and previous studies show that high performance is possible even at PGM loadings of ~0.5 mgPGM cm-2[3,4]. However, there are only few studies which systematically analyze the effect of catalyst loading on the voltage losses of an electrolyzer [5,6].

In this study, we investigate the influence of reduced catalyst loadings on both the anode and cathode of a PEM electrolyzer and analyze the resulting changes in performance and voltage loss contributions. MEAs based on a Nafion® 212 membrane, carbon-supported platinum catalysts (Pt/C) for the hydrogen evolution reaction (HER), and an IrO2/TiO2 catalyst (Umicore) for the oxygen evolution reaction (OER) were fabricated with different catalyst loadings. A reduction of the Pt loading on the cathode from 0.32 to 0.02 mgPt cm-2 was achieved by using a catalyst with a lower Pt content of 4.8 wt% instead of 46.1 wt% Pt, while keeping the electrode thickness similar (~10 μm). Even though the loading was reduced by more than an order of magnitude, the performance remained essentially unchanged (see red and blue curve in Figure 1a), which is mainly due to the fast kinetics of the HER [7]. On the anode, the Ir loading was reduced from 1.6 to 0.4 mgIr cm-2by decreasing the electrode thickness from ~8 to 2 μm. The resulting increase in cell voltage (see green curve in Figure 1a) is in part due to the lower electrochemically active surface area, i.e., due to an OER kinetic loss of ~30 mV. Unfortunately, we observe an additional increase in contact resistance for this very thin electrode, which we ascribe to its inhomogeneity. Contributions of proton and mass transport losses for the different electrodes will be analyzed as well.

Figure 1b shows the PGM-specific power density (in gPGM kW‑1) versus current density for different catalyst loadings. It can be seen that the gPGM kW‑1 at the same electrolyzer efficiency (see dashed lines in Figure 1b) can be reduced roughly 3‑fold for the MEA with the lowest PGM loading. Figure 1b also illustrates that the gPGM kW‑1decrease substantially with increasing current density, but of course at the expense of a lower efficiency. Therefore, the preferred point of electrolyzer operation will always be a trade-off between low capital costs (determined by loading and current density) and low operating costs (determined by efficiency).

Acknowledgements: This work was funded by the Bavarian Ministry of Economic Affairs and Media, Energy and Technology through the project ZAE-ST (storage technologies).

Figure 1: a) Ambient pressure polarization curves for MEAs (50 mm thick membrane) with different catalyst loadings at 80°C. Full lines represent the measured cell voltage, dashed lines give the iR-free cell voltage. b) PGM-specific power density as a function of current density. The dashed lines indicate electrolyzer efficiencies of 65, 70 and 75% based on the lower heating value (LHV) of hydrogen. 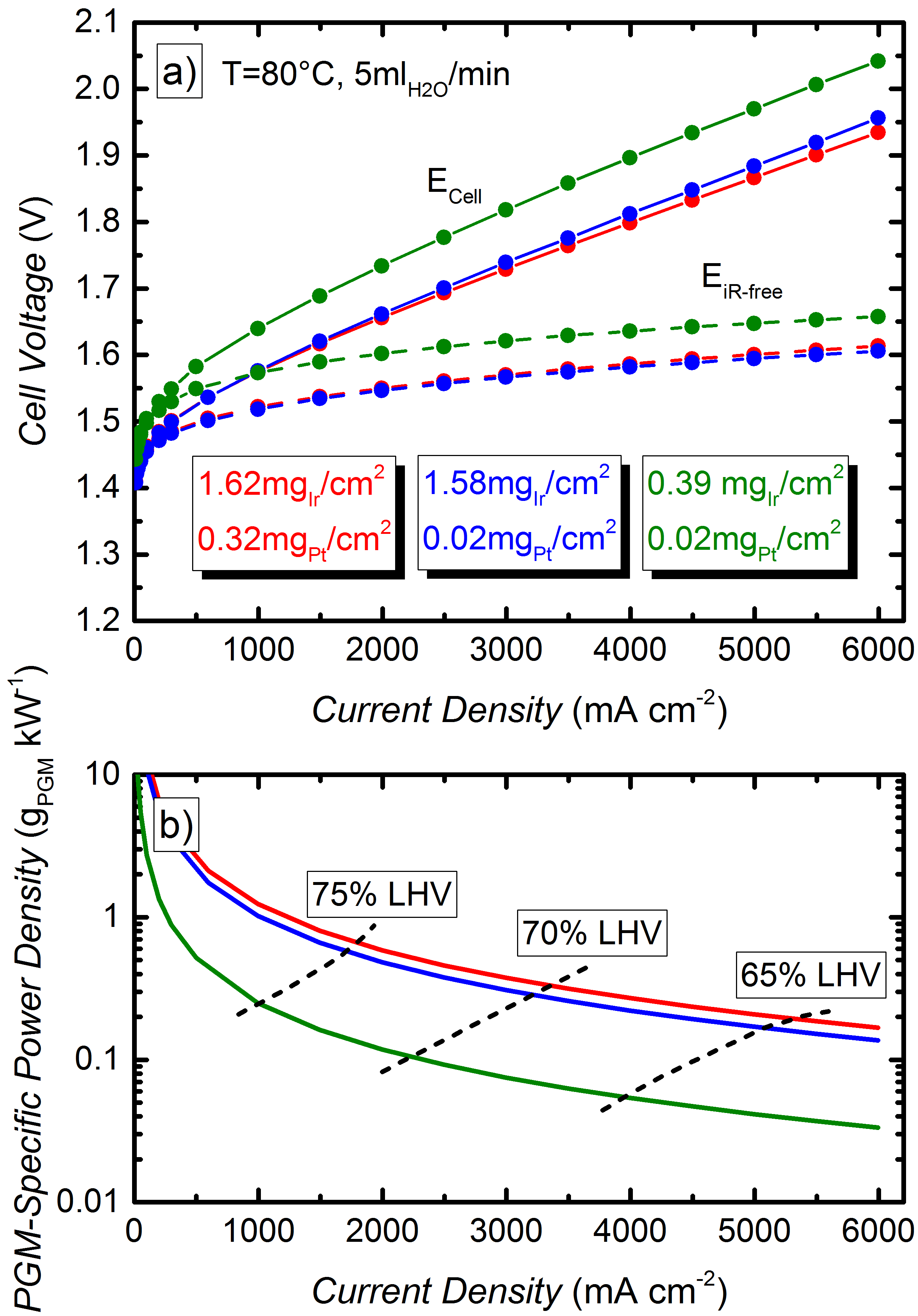