Grand Salon C - Section 15 (Hilton New Orleans Riverside)
R. Jung, M. Metzger (Technical University of Munich), F. Maglia (BMW Group), C. Stinner (BMW AG), and H. A. Gasteiger (Technical University of Munich)
Li-Ion batteries have recently been used to power battery electric vehicles (BEVs). However, in order to penetrate the mass market, further improvements have to be achieved with respect to the driving range of BEVs.[1] The latter highly depends on the choice of the cathode active material, with layered lithium nickel manganese cobalt oxides (LiNixMnyCozO2, NMC) being one of the most promising class of candidate materials.[2, 3] Even though the theoretical capacity of NMC is as high as ~275 mAh/gNMC, not all of the lithium can easily be extracted due to structural instabilities occurring at high states-of-charge (SOC).[4, 5] Additionally, the sloped voltage profile requires very high voltages to achieve complete removal of lithium. In order to improve the accessible capacity at reasonable upper cut-off voltages, Ni-rich NMCs (Ni-content >> Mn- and Co-content) recently came into focus, as more lithium can be extracted from their structure within the same voltage window. Therefore, they provide larger specific capacities and specific energies, which are crucial for a longer driving range of electric vehicles.[2, 6, 7]

In this work, we will compare LiNi1/3Mn1/3Co1/3O2 (NMC111), LiNi0.6Mn0.2Co0.2O2 (NMC622), and LiNi0.8Mn0.1Co0.1O2 (NMC811) with respect to their cycling stability in NMC-graphite cells at different upper cut-off voltages. It will be shown that stable cycling is possible up to 4.4 V for NMC111 and NMC622 and only up to 4.0 V for NMC811. At higher potentials, significant capacity fading was observed, which was traced back to an increase in the overpotential of the NMC electrode. We show that the increase in the overpotential occurs when the NMC materials are cycled up to a high-voltage feature in the dq/dV plot, which is described in literature as the H2 -> H3 phase transition.[6, 8] Based on gas analysis using On-line Electrochemical Mass Spectrometry (OEMS), we prove that all three materials release oxygen from the particle surface and that the onsets of oxygen evolution for the different NMCs correlate well with the H2 -> H3 phase transitions. Interestingly, the oxygen evolution coincides with the onset of CO2 and CO evolution, suggesting a correlation between the oxygen release and the formation of CO and CO2. For comparison, we show that no oxygen is released from spinel LiNi0.43Mn1.57O4 (LNMO) up to 5 V vs. Li/Li+ and, consequently, that no CO2 or CO is observed. Against the common understanding that the electrochemical oxidation of the carbonate electrolyte is catalyzed by the transition metals in metal oxide surfaces, leading to CO2 and CO evolution at potentials above 4.7 V vs. Li/Li+, our observations suggest that the observed CO2 and CO is mainly due to the chemical reaction of released reactive oxygen with the electrolyte. 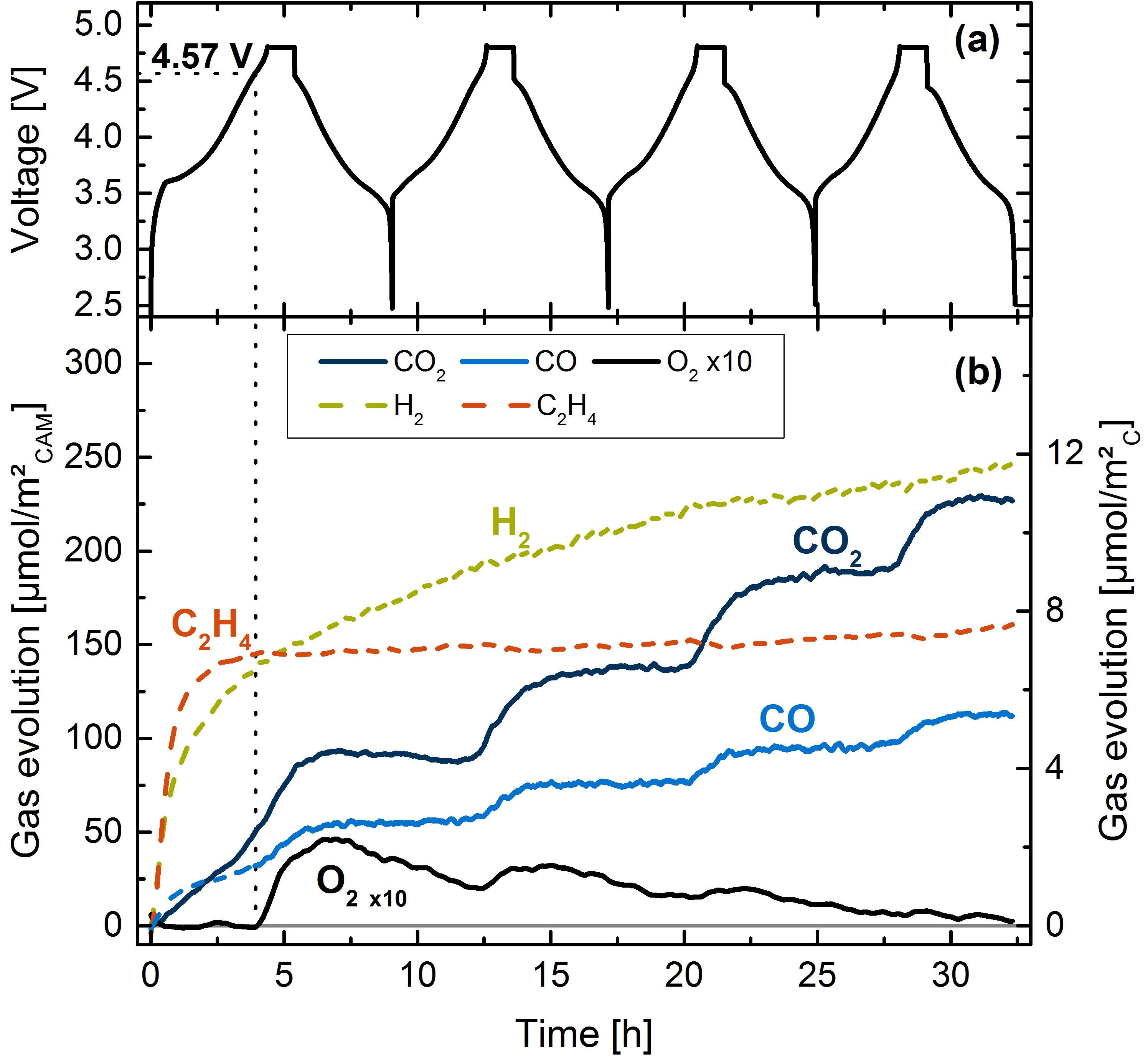