Grand Salon C - Section 15 (Hilton New Orleans Riverside)
J. E. Vogel, D. V. Clement, E. Hardy, B. A. Mazzeo, and D. R. Wheeler (Brigham Young University)
The electrical conductivity of battery films is an important characteristic in how battery cells perform but is not very well understood on a µm scale. Although the macroscopic electrical conductivity of battery films has been explored, small-scale variations in the film have been shown to exist [1]. Factors that may affect this heterogeneity include film composition as well as manufacturing steps such as drying and calendering [2].

We show that in commercial quality battery electrode films there is not only expected variation on a micrometer scale, but that measured conductivity variation can occur on the order of millimeters. A modified micro-N-line probe [1] was installed in a high-resolution stage for taking local measurements of conductivity. Electrical conductivity of battery films was then mapped.

A key advance in this work is the correlation of local conductivities with the local microstructure. ”Hot”, ”average” and ”cold” conductivity spots were investigated by scanning electron microscopy (SEM) with focused ion beam (FIB) milling in order to produce planar cross sections. The SEM/FIB images were then segmented into 3 major domains: carbon-binder, active material, and large pores. We see a strong correlation between conductivity and both porosity and carbon volume fraction, consistent with macroscopic trends observed in our previous research [3].

This research is supported by the US Department of Energy through the Advanced Battery Material Research (BMR) Program.

Figure 1: (a) Shows a local map of resistivity taken on an NMC TODA 523 cathode with locations A, B, and C marked where further investigation was carried out. (b) Shows FIB/SEM investigation of point B. (c) Shows segmentation of the FIB/SEM image into 3 domains: carbon-binder (grey), active material (white), and large pores (black). (d) Shows volume fractions taken over a large range of samples for high-conductivity, average-conductivity and low-conductivity locations. 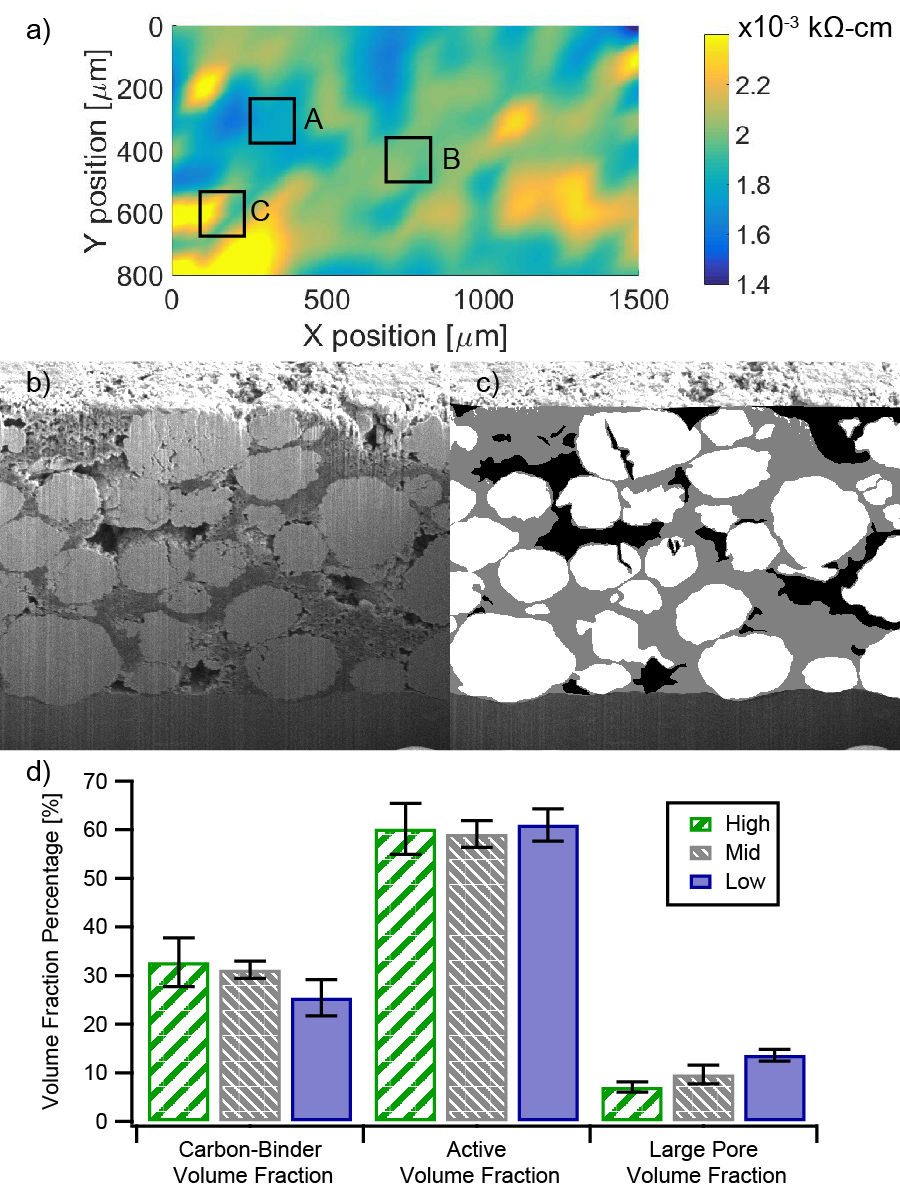