1410
(Invited) PGM-Free Oer and HER Electrocatalysts for Alkaline Electrolyzers

Fuel cell technology has been extensively developed in order to create new clean sources of energy. In order to have a wide implementation of fuel cell devices powered by hydrogen (H2), an inexpensive source of clean H2should be created. One of the technologies that produces hydrogen gas is the splitting of water through electrolysis. The majority of electrolyzers available on the market use proton exchange membrane (PEM) technology, which requires catalysts consisting of expensive and rare platinum group metals (PGMs) due to its acid chemistry. To increase penetration into the water electrolyzer and fuel cell markets, abundant and inexpensive materials should be incorporated. Alkaline exchange membrane water electrolysis (AEMWE) is an alternative technology that does not require PGM catalysts and, therefore, enables the use of base metals, alloys and oxides.

15g of EH-5 (SA=400 m2 g-1) silica, 2.5g of nickel nitrate, 2.5g of copper nitrate and 3g of ammonium molybdate tetrahydrate were mixed by grinding them in a porcelain crucible. The crucible was placed into a tube furnace and heated to 100 °C with a ramp rate of 10ºC/min. The 100°C temperature was held for 50 minutes before an additional temperature ramp was conducted at an interval of 5ºC/min until 550°C was reached and held for four hours. During this time, a reducing atmosphere was maintained using 7% H2. The silica was later removed by rinsing with 7M potassium hydroxide (KOH) for 24 hours, followed by washing and drying.

HER catalysts were based on Ni-M materials (M=Mo and W) supported on high surface area carbon with loading of 50wt%. Precursors of transition metals were deposited by wet impregnation on surface of KetjenBlack 600 followed by water evaporation. Powder was reduced in 7% H2at T=550°C and t=1h. After slow passivation materials were used for HER.

Characterization. The catalysts were characterized by BET, SEM, TEM and XRD methods, and catalytic activity for ORR and OER were measured in alkaline media using the RDE method. Pt wire was used as the counter electrode, and the reference electrode was a Hg/HgO corresponding to an RHE of 0.926 at 25°C. Cell testing was performed using a Fuel Cell Technologies 25 cm2fuel cell stack, modified for electrolysis operation.

SEM images of NiMo/KB show that catalysts particles have a similar size with carbon particle on the range of ~20-40nm, which is expected for such a high loading (Figure 1, top left). The surface area was measured at 450±10 m2 g-1 via BET analysis.

Electrochemical activity of the OER is shown in Figure 1 (top right).

Operational testing was conducted on the NiMoCo OER catalyst provided by UNM in the 25 cm2 cell previously described. As shown below in Figure 1 (bottom), the UNM supplied material experienced relative stability at the steady-state current density of 200 mA/cm2, as compared to the PGM based reference plot. Both tests used the same membrane and electrode binders. 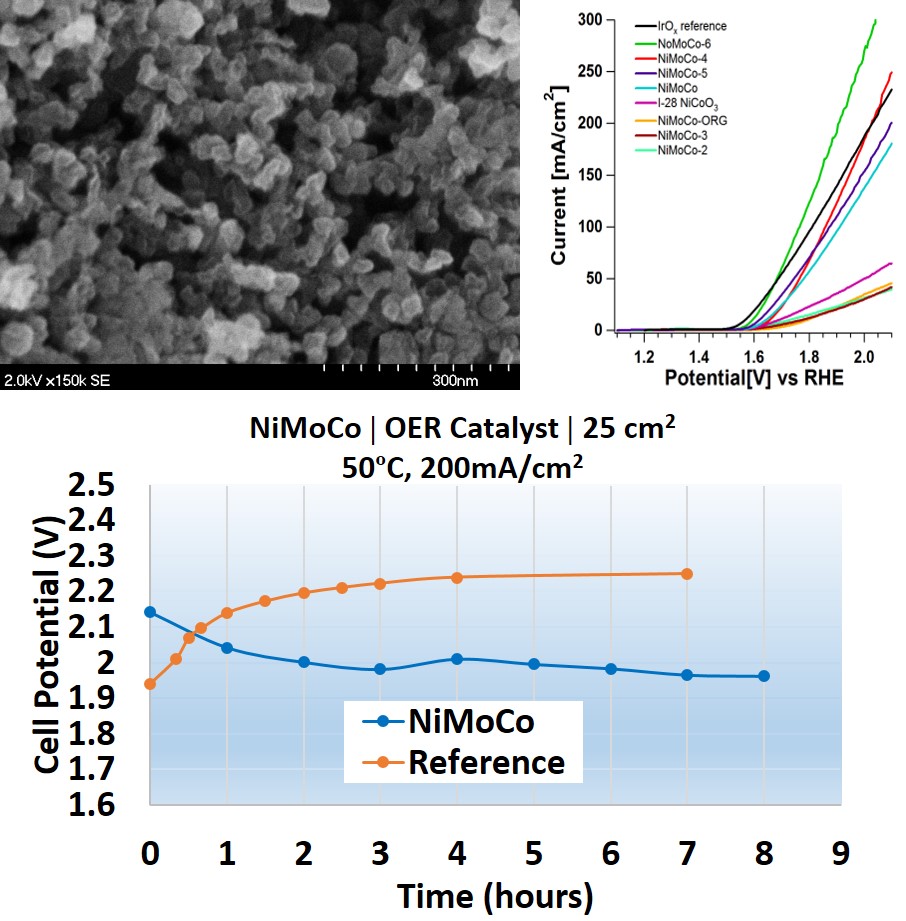