Grand Salon C - Section 13 (Hilton New Orleans Riverside)
J. Zhang (City University of Hong Kong) and D. Y. W. Yu (City university of Hong Kong)
In the past few years, Na-ion batteries (NIBs) have attracted much attention as an alternative energy storage device because Na is abundant and evenly-distributed in the world. However, commercialization of Na-ion batteries that have performances similar to existing lithium-ion batteries (LIBs) still requires the discovery and optimization of new high-capacity high-voltage electrode materials. NaVO3, which has been studied as anode for NIB based on the redox reaction of V5+/V4+ [1, 2], is evaluated as cathode material for NIB for the first time in this work.

Commercial NaVO3 shows no capacity at all when tested between 1.5 V and 4.5 V vs. Na/Na+, since the initial valence state of vanadium in NaVO3 is 5+ and the V5+/V4+ reaction occurs below 1.5 V. However, when the charging potential is increased to 4.9 V, capacities of 72.0 and 28.4 mAh g-1 are obtained from charge and discharge, respectively (see Figure 1(a)). Electrolyte decomposition alone during charging cannot account for the observed non-zero discharge capacity, so there has to be other mechanisms that can compensate for the charge transfer. We note that the second charging profile is different from that of the first charging profile. This result reassembles that of Li2MnO3 in LIB, which also shows electrochemical activity after a high-voltage activation process. We suspect NaVO3 undergoes a similar reaction mechanism as Li2MnO3, possibly a participation of oxygen redox-couple during the charge/discharge processes. Further work is being carried out to elaborate on the charge-discharge mechanism of NaVO3. When the commercial NaVO3 material is subjected to cycling, the capacity continues to increase, and eventually stabilizes at around 47 mAh g-1 after 50 cycles (see Figure 1(d)). This indicates that the charge-discharge process is reversible.

The theoretical capacity of NaVO3 is 220 mAh g-1 if one Na is removed from the lattice. Yet, the obtained capacity from commercial NaVO3 is only about 50 mAh g-1. The low capacity is partly attributed to the insulating nature of the material. We found that the available capacity from the material depends on particle size and electrical conductivity. Figures 1(b) shows the charge-discharge curves of ball-milled NaVO3 sample, which exhibits similar storage behavior to the pristine NaVO3, but delivers a higher capacity. Further ball-milling with carbon (acetylene black) increases the initial charge and discharge capacities to above 100 mAh g-1, but capacity degradation is severe. More results on the charge-discharge mechanism and stability of the material will be presented during the meeting. 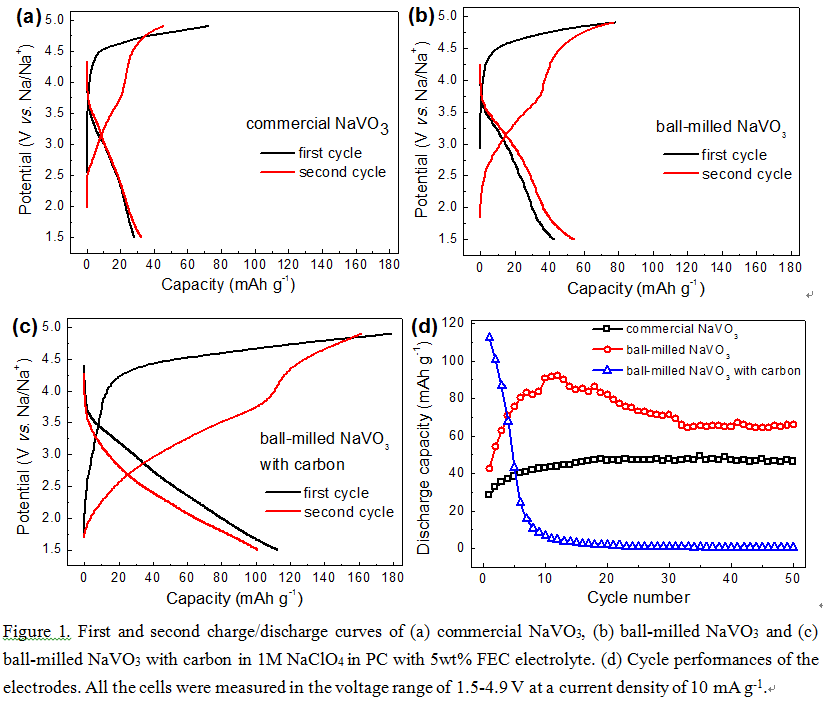