Grand Salon A - Section 3 (Hilton New Orleans Riverside)
K. Uosaki, G. Elumalai, H. C. Dinh, H. Noguchi, A. Lyalin (National Institute for Materials Science), and T. Taketsugu (National Institute for Materials Science, Hokkaido University)
Although hydrogen evolution reaction (HER) takes place readily at electrodes of Pt group metals and their alloys, for water electrolysis to become a practical hydrogen production process, cost reduction is essential and the use of expensive and less abundant Pt group metals must be avoided. Recently, inorganic catalysts such as nano-sized metal dichalcogenides such as MoS2 and WS2, which are semiconductors with layered structure, have been found to have high activity for HER and have drawn great attention due to their low cost and high chemical stability.

Hexagonal boron nitride (h-BN) monolayer has similar geometric structure to that of graphene but it is an insulator with a wide band gap (˜5.8eV) and, therefore, is not considered as an electrocatalytic material. We, however, theoretically demonstrated that the band gap of h-BN monolayer is considerably reduced and h-BN becomes semiconducting if some defects are introduced and/or it is placed on metal substrates [1]. Theoretical investigation also suggested that h-BN would act as an effective electrocatalyst for oxygen reduction reaction (ORR) [2]. It was experimentally proved that Au electrodes modified with various types of h-BN indeed act as effective ORR electrocatalysts, although the overpotential for ORR is still high compared with Pt electrode and oxygen is mainly reduced to H2O2 via 2-electron process [2-4]. Considering the electrocatalytic activity of BN for ORR and relatively large hydrogen adsorption/storage ability of BN, electrocatalytic activity of BN nanosheet (BNNS) on Au electrode is examined [5].

Figure 1 shows linear sweep voltammograms (LSVs) of bare and BNNS modified Au, glassy carbon (GC), and Pt (v, vi) electrodes obtained in Ar saturated 0.5 M H2SO4 solution by scanning the potential negatively with 1 mV/s. Overpotential at Au electrode is reduced by ca. 250 mV by the BNNS modification, showing that BNNS indeed acts as an electrocatalyst for HER at Au electrode as does for ORR, although BNNS shows almost negative and no effect at Pt and GC electrodes, respectively, as observed for ORR.

DFT calculations were performed to obtain free energy diagram for HER at various 2D BN nano-systems on Au(111) at equilibrium potential. Properties of the h-BN monolayer towards H adsorption are considerably modified by Au(111) substrate. Atoms at the edges of BNNS islands on Au(111) are found to provide energetically favored sites for adsorbed hydrogen, i.e., intermediate state, of HER and can act as good electrocatalytic sites for HER.

Based on this theoretical consideration, further improvement of electrocatalytic activity for HER can be expected by increasing the fraction of atoms at the edges of BNNS on Au substrate. Fraction of edge atoms should be increased by decreasing the size of each BNNS at a given amount of BNNS on the surface. The overpotential decreased by decreasing the size of the BNNS as expected. The best result was obtained for the Au(111) electrode modified with the smallest BNNS used in the present study (BNNS(0.1-0.22 µm)/Au). The overpotential at BNNS(0.1-0.22 µm)/Au electrode is only 30 and 40 mV larger than that at Pt electrode at 5 mAcm-2 and 15 mAcm-2. 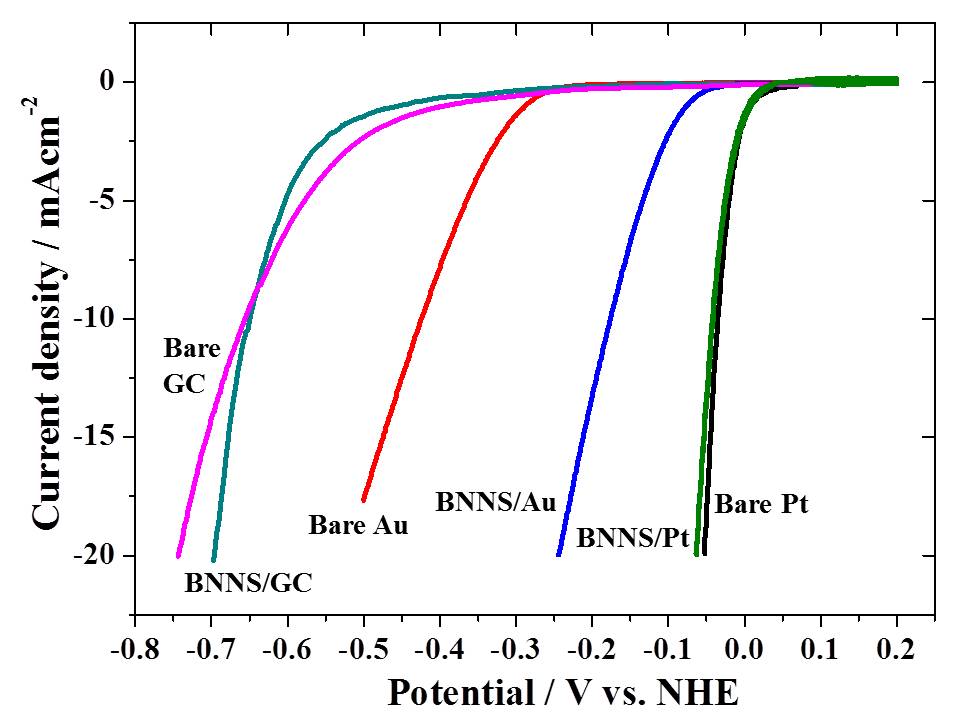