The VV species in the catholyte, VO2+, can precipitate according to the reaction5

This reaction is usually found to be very slow and, in practice, supersaturated solutions in sulphuric acid where the concentration of VO2+ exceeds the thermodynamic limit set by Equation (1) can persist for very long periods of time, especially in the presence of certain additives. Although several studies5,6 were reported on the stability of VV in the catholyte of VFBs and several mechanisms of precipitation were proposed, there had been a lack of detailed kinetic studies of the process leading to precipitation and the variation with temperature had never been quantitatively analysed. Recently2 we reported a quantitative study of the kinetics of precipitation as a function of composition and temperature. Our results showed that precipitation of VV from sulfuric acid solution occurs after an induction time which increases exponentially with the inverse of temperature, i.e. shows Arrhenius behavior. Furthermore, the induction time increases exponentially with overall concentration of sulphate (which is mainly in the form of bisulphate in these catholytes) and decreases exponentially with concentration of VV. In this paper, we report an extension of that investigation to examine the effect of a number of additives on catholyte stability.

In a typical experiment, a 0.8-cm3 sample of catholyte was placed in a small glass vial which was then immersed in a thermostatic water bath at a selected temperature; the solution temperature was within 0.1 K of the bath temperature in ~60 s. The water-bath reservoir was made of transparent glass and was fitted with a lamp so that the solution in the vial was very clearly visible and the first signs of precipitation could be observed.

Typical results are shown in Fig. 1 for added phosphoric acid. Clearly, phosphate has a very strong effect on the kinetics of precipitation. The induction time increases exponentially with concentration of phosphate as shown by the good least-squares fit (τ = 0.3028exp(8.804[P]) with a coefficient of determination R2 = 0.9707). For example, addition of 0.34 M H3PO4 gave an ~22-fold increase in induction time. An Arrhenius dependence of induction time on temperature was observed and the activation energy was similar to that in the absence of additives. Other additives were similarly investigated: the results will be presented and discussed. 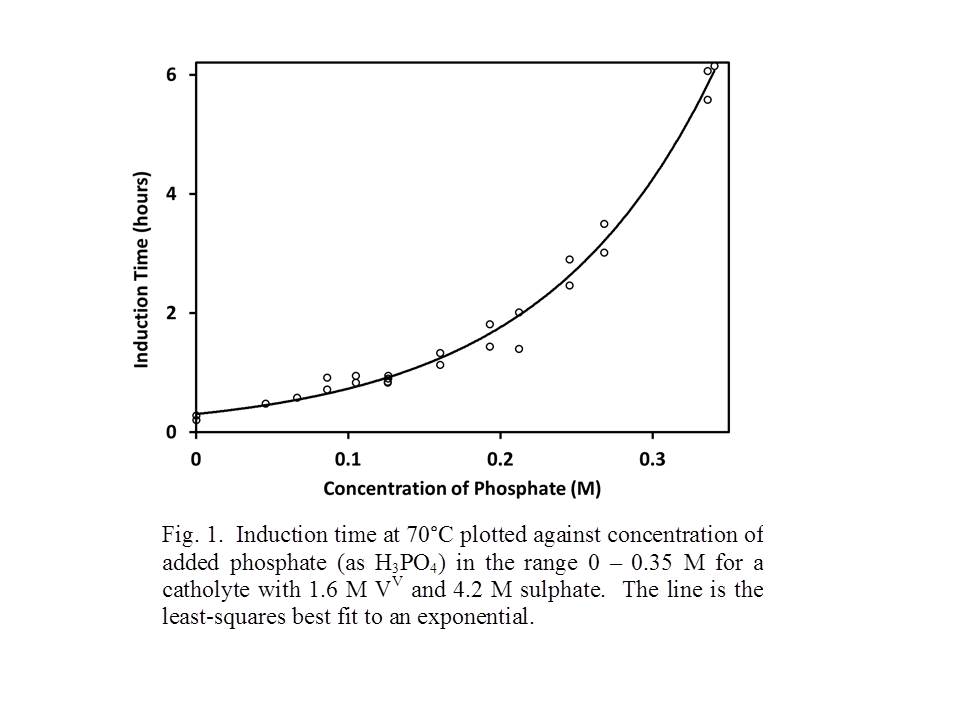