Experimental conditions such as the material, surface condition and pre-treatment of the electrodes have a significant impacts on electrode kinetics [5]. There are numerous reports of the effects of electrochemical pretreatment on the rates of electrochemical reactions at carbon electrodes. In the case of the VIV-VVredox couple, the kinetics at carbon felt electrodes were reported [4] to decrease after anodic treatment. However, electrodes consisting of graphene oxide on a glassy carbon substrate were reported [6] to show enhanced kinetics after cathodic treatment.

We have previously reported [7-9] for a range of carbon materials that the kinetics of the VIV-VV reactions is enhance by cathodic treatment and inhabited by anodic treatment. After several oxidation and reduction treatments (in H2SO4 electrolyte in the presence or absence of VIV-VVspecies) electrodes can repeatedly and reproducibly toggled between cathodically activated and anodically deactivated states. However, since the carbon surface may corrode at the anodic treatment potentials used during treatment it would be expected that anodic treatment should lead to an apparent increase in the electrode kinetics due to roughening of the surface.

In this paper we study the effects of the carbon electrode surface on the kinetics of the VFB reactions. It will be shown that treatment of the carbon at anodic potentials initially leads, as expected, to roughening and an increase in electrode kinetics. However, as shown in Fig. 1, this is not the full story with a reproducibly reversible regime being achieved after several cathodization-anodization treatment cycles. The results of a range of techniques including Brunauer–Emmett–Teller (BET) measurement, scanning electron microscopy and cyclic voltammetry will be used to investigate this behaviour. 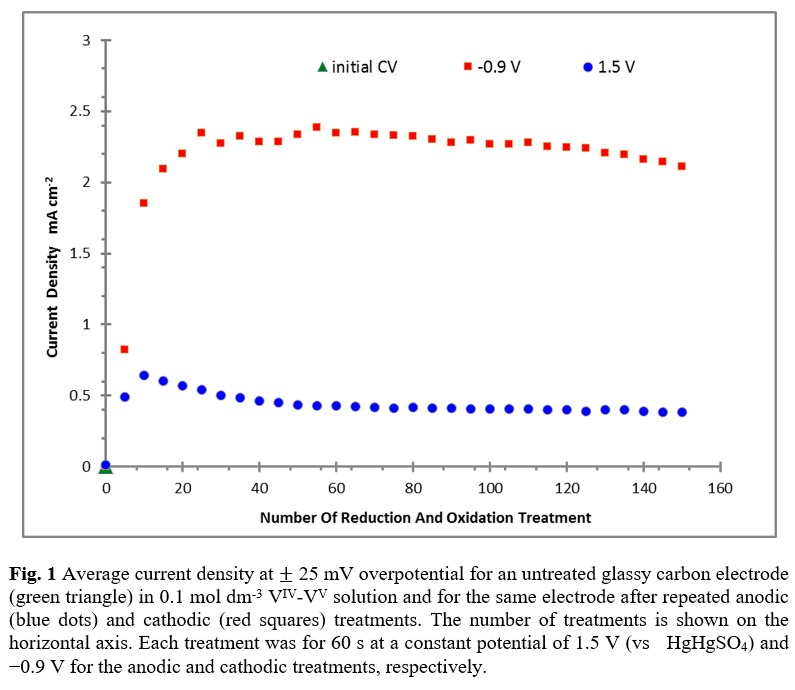