Grand Ballroom (Hilton New Orleans Riverside)
K. Henry and Y. Kuo (Texas A&M University)
Hydrogenated amorphous silicon (a-Si:H) is a commonly utilized material for the fabrication of thin film solar cells due to the simple process and plenty of supply of the low-cost raw materials. The a-Si:H diodes have also been used as light sensors. In all applications, the wavelength of the incident light and the absorption path are important to the device performance. Conventionally, these devices are oriented such that incident light passes through layers with higher optical band gaps first. This is to prevent the absorption of light from occurring outside the absorber layer where useful excitons are generated. For the case of an a-Si:H device with a pin structure, this means that light passes through the p-type layer before reaching the intrinsic layer. In this study, authors investigated the effects of incident light orientation on the performance of pin a-Si:H thin film diodes and quantified the difference in external quantum efficiency (EQE) between light entering through the p+ layer vs. the n+ layer. Additionally, versions of the diodes were constructed with aluminum reflector layers on either side of the pin tri-layer to examine the extent to which light scattering and reflection improved the light absorbing characteristics of these diodes.

Three types of diodes were fabricated and their structural arrangements are shown in Figure 1. The thicknesses and deposition conditions of all layers in the pin diodes were the same. The only difference in these devices was the inclusion of an Al back reflector layer and its location in the diode. The p+, i, and n+ layers in the pin tri-layer stack were deposited using a single-chamber, one pump-down, plasma-enhanced chemical vapor deposition (PECVD) process with a 50 kHz RF power generator. Indium tin oxide (ITO) layers were sputter deposited above and below the tri-layer to serve as transparent conductive electrodes. When an Al reflector layer was included in the structure, it was also sputter deposited either above the topmost ITO layer or below the bottommost ITO layer. All devices were fabricated on the Corning 1737 glass substrate to allow for light admission through either side of the device. For testing purposes, the bottom electrode was applied with a voltage swept from ‑2 to 1 V under the exposure of a red, green, or blue LED light at a fixed intensity of 13.8 W/m2. The current density-voltage (J-V) characteristics were measured. Then, the external quantum efficiency (EQE) was estimated by determining the ratio between incident photons and photogenerated excitons at the short-circuit condition during illumination.

Figure 2 shows EQE vs. incident light wavelength for both incident light orientations, with and without reflective layers. It can be seen that the inclusion of a reflector layer always improved the EQE of the diode for all wavelengths of incident light. This effect was most pronounced for red light due to a-Si:H’s relatively poor absorption of low energy photons. With a back reflector, much of red light was able to re-enter the diode which would have otherwise exited out the far side of the diode. On the other hand, since high energy light such as green and blue light are already well absorbed by a-Si:H, the improvement of EQE under these illumination conditions was less pronounced, though still detectable. Consistent with commercial solar cells, these diodes exhibited higher EQEs for most wavelengths of light when oriented such that the light passes through the p+ layer first. Lower energy light such as red light showed lower EQE when shined through the p+ layer than the n+ layer. This was likely due to the effect of defects induced by the doping of a-Si:H. Analysis of these diodes showed that the high power n+ layer deposition condition may generate a large number of defects into the film. This results in a high density of recombination sites for electrons at the i/n+ interface. Given that red photons have low energy, electrons generated by this light would be more likely to recombine at these intermediate midgap sates. If the red light enters through the p+ layer, electrons are generated farther away from the n+ layer which further increases the likelihood of recombination due to the greater required drift distance. This electron recombination reduces the number of available charge carriers during diode operation, resulting in a drop in current and, consequently, EQE. Refinement of the fabrication procedure could alleviate this issue, potentially resulting in devices that show better performance during p-side illumination for all wavelengths of incident light. 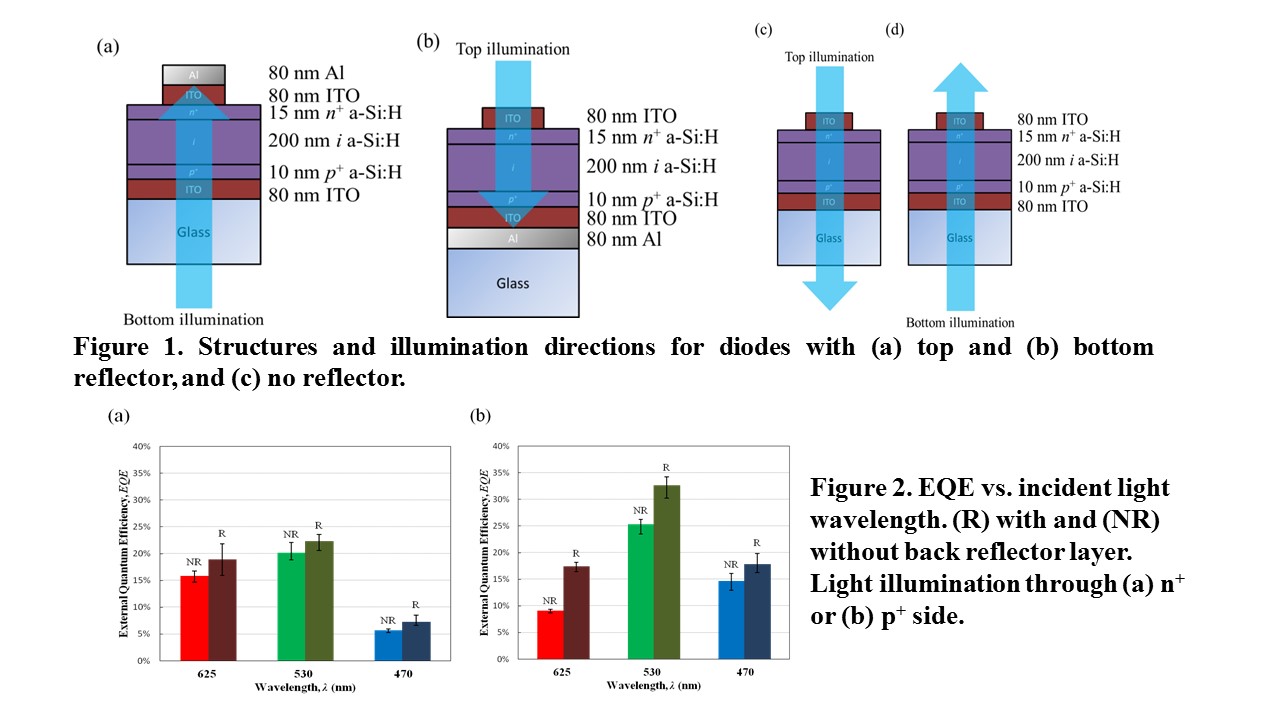