Grand Salon B - Section 10 (Hilton New Orleans Riverside)
U. Anjum (Indian Institute of Technology Delhi), M. Agarwal, T. S. Khan, and M. A. Haider (Indian Institute of Technology, Delhi)
The Molecular dynamics simulations on PrBaCo2O5+δ (PBCO) was carried out to calculated the oxygen anion diffusion coefficient in the a-b direction, which was measured to be 3 x 10-8 cm2s-1 at 873 K and the diffusion coefficient was observed to be higher than the c plane (D=8x10-9 cm2s-1 at 873K) as shown in inset of Figure 1a.The electrochemical performance was observed to correlate with the oxygen diffusion coefficient. The diffusivity in PrBa0.5Sr0.5Co1.5Fe0.5O5+δ (PBSCF) (1.18 x 10-7cm2s-1) was calculated to be higher by an order of magnitude as compared to PBCO (3x10-8 cm2s-1 at 873 K, Figure 1a). Dense thin-film of electrodes of PBSCF (2 µm thick) with <500 nm grain sizes measured to give a polarization resistance of 7.21 Ω cm2 at 873 K, (Figure 1b), which was ascribed to the bulk-diffusion in the electrode. In parallel, oxygen vacancy formation in the Gd plane (Eov= 98.4 kJ/mol) of GdBaCo2O5+δ (GBCO) was measured to be lower than that of Ba plane (Eov=266.3 kJ/mol), therefore; vacancies were observed to be concentrated in the Gd plane. The surface energy of the Ba plane was measured to be minimum ϒ =7.2 kJ/mol, which makes it the most exposed surface, while it is least diffusive for oxygen anions. Therefore, larger size bulk microstructures of GBCO were measured to give lesser than expected oxygen anion diffusivity (D=6.04x10-10cm2s-1). GBCO particles of reduced size are expected to expose higher energetic Gd plane, which may enhance diffusivity. The particle size of GBCO was reduced to 20 nm using a bio-milling approach, wherein the chemically synthesized particles were subjected to fungus Saccharomyces Cerevisiae, for 72 hrs of fermentation (Figure 1c). The electrochemical performance of the bio-milled nanoparticles electrode was improved by 20% as compared to bulk electrode of GBCO particles (Figure 1c). MD simulation on a GBCO nanoparticle showed, the diffusion in nanoparticles to represent two distinct regimes; one corresponding to the surface and other the bulk. The stability of nanoparticles were validated by calculating the root mean square deviation (RMSD) of atomic positions in MD simulations. The thickness (20A0) of diffusive surface shell regime was observed to be particle size independent, while the thickness of the diffusive core regime varies with the size of nanoparticle as shown Figure 1d. The diffusivity of the shell regime (D=3.61x10-9 cm2 s-1) was calculated higher than of the core (D=5.07x10-10 cm2 s-1 at 1073K). Thus, nanoparticles showed improved electrochemical performance as compared to the bulk electrode. 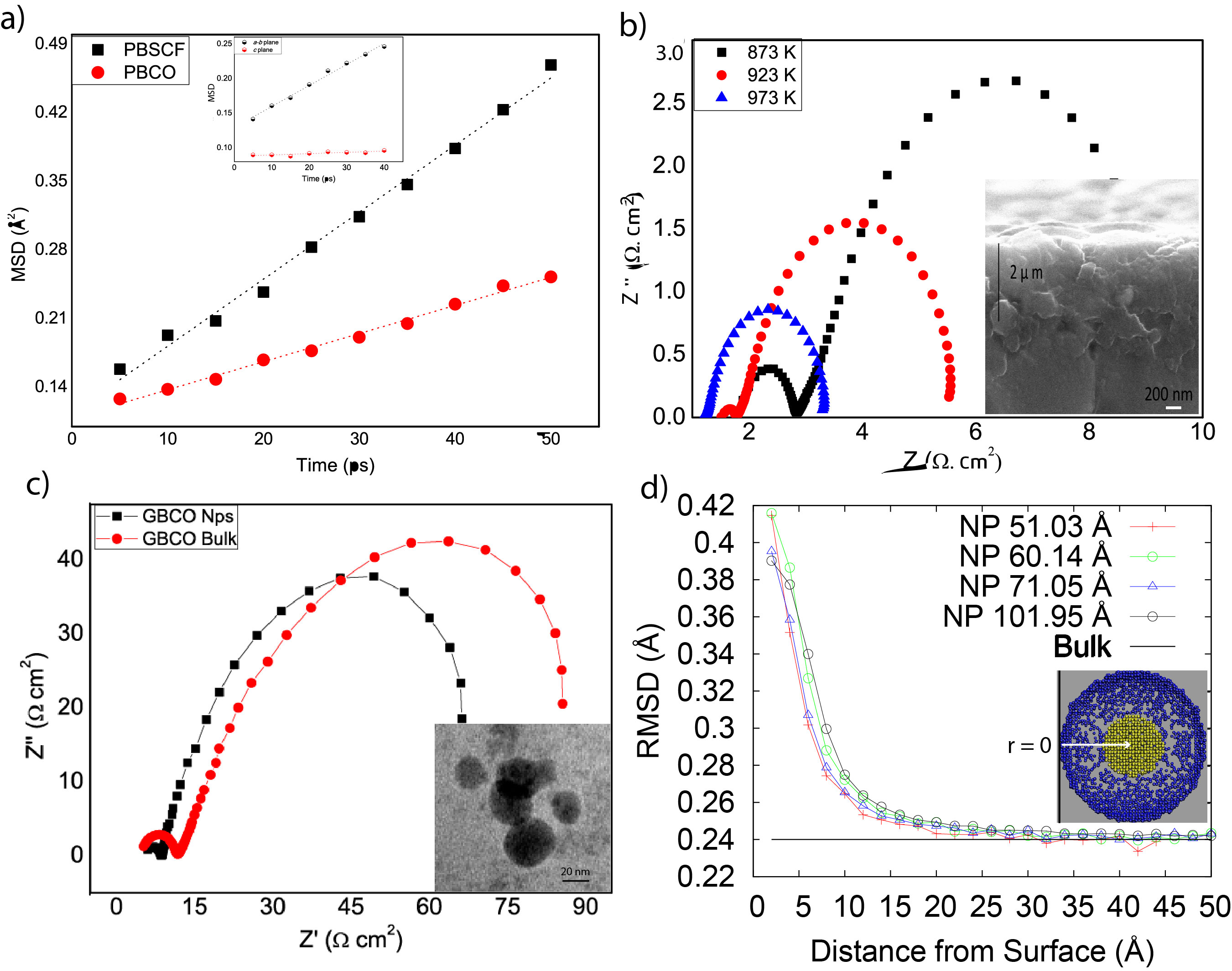