Grand Salon C - Section 13 (Hilton New Orleans Riverside)
V. Knap, D. I. Stroe (Department of Energy Technology, Aalborg University), R. Purkayastha, S. Walus (Oxis Energy Limited), D. J. Auger, A. Fotouhi, and K. Propp (Cranfield University)
Lithium-Sulfur (Li-S) batteries are an emerging battery technology, which is perspective because of its high volumetric energy density, good safety, and expected low production cost1, 2, 3. Nevertheless, Li-S batteries’ shortcomings are their low coulombic efficiency, high self-discharge, and fast capacity fade1, 2. Considering the practical applications based on batteries, the question of lifetime is crucial for a reliable, long-term, and economic service. The battery lifetime hugely depends on the operation conditions and the used control strategies. Therefore, there is a need to assess the Li-S battery degradation in order to design properly the battery application. Moreover, such assessment will also provide a base for understanding and developing diagnostic and prognostic tools.

As the starting line, a methodology applied for the Li-ion batteries in Ref. (4) can be also considered for Li-S batteries. The lifetime testing in Ref. (4) consists of ageing the cells by exposing them to various cycling and storage conditions and periodically performing the reference performance test (RPT) to evaluate their actual attributes. While constructing the test matrix for lifetime testing, the specific Li-S mechanisms should been taken into account; for example polysulfide shuttle occurring at high state-of-charge (SOC) levels and Li2S precipitation at the anode especially during low SOC levels2. Moreover, the Li-S reactions are strongly affected by the operating temperature and the applied current rates. So, the test matrix is supposed to reflect various ageing phenomena over the whole considered operation region.

The second challenge is to tailor the RPT with respect to the Li-S batteries. Due to the intrinsic characteristic of the battery chemistry and the amount of reaction sensitivity towards the various conditions, the Li-S batteries exhibit the so-called ‘history’ effect. By neglecting this phenomenon, the performance of the cells will be wrongly evaluated under partially-unknown states, which can lead to not compatible, unreliable and even not repeatable results. Therefore, we proposed a pre-condition cycle after the ageing step in order to reset the cell ‘history’ before running the specific diagnostic step. Usually, for Li-ion batteries, only the changes in cell’s capacity and resistance are evaluated as they are the immediate cursors for the battery performance. However, for nowadays Li-S batteries, the high and fast self-discharge process, caused by the polysulfide shuttle, is present vastly influencing their performance in the practical applications. Therefore, the focus of the diagnosis needs to be expanded to capture the change in the polysulfide shuttle current or in this short-term self-discharge. By keeping all this in mind, the time requirement of the RPTs should not been forgotten either. The Li-S batteries are so far dedicated only to low power applications, due to their current rate limitations. Therefore, including all the necessary test procedures, which in many cases are going to be performed by low currents, will require an extensive amount of time; this makes the Li-S battery testing more expensive and also can add some bias to the degradation evaluation.

In consequence, we propose a novel methodology for assessing Lithium-Sulfur battery ‘s degradation for practical applications, reflecting the before mentioned aspects. The scheme of the lifetime testing procedure is shown in Figure 1. Moreover, the example of the tailored RPT is illustrated in Figure 2. 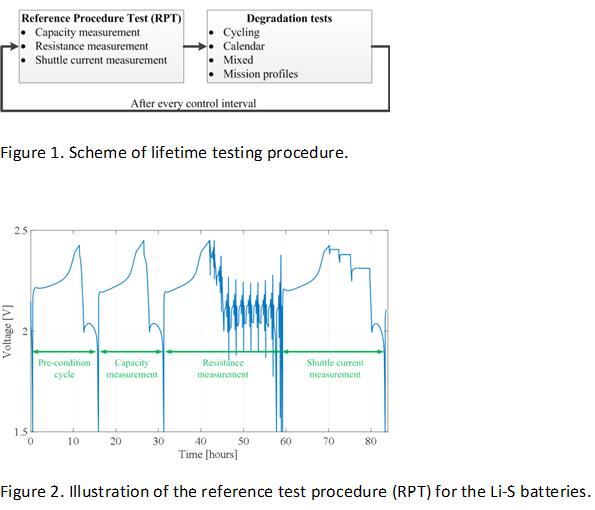