Grand Salon C - Section 13 (Hilton New Orleans Riverside)
E. Pardo, E. Thai, N. Dunham, J. Alonso, J. Garcia, A. Dinh, and T. H. Yu (California State University, Long Beach)
Lithium-sulfur batteries1 are a potential game-changer in rechargeable lithium battery technology. In addition to being very low cost due to the abundance of sulfur, it also has a higher theoretical specific capacity (1674 mAh/g-sulfur) than traditional lithium-ion batteries. In the last five years, incorporating graphene oxide2, 3 (GO) has been an effective strategy to prolong the life of lithium-sulfur batteries, which improves overall performance and battery stability. However, current methods of GO synthesis, such as the Hummers method2, are not cost-effective. New research explores the use of graphene halides4to replace GO. The graphene halides used in this study can be produced through a simple ball-mill process which is easily scalable. Our studies show that out of the halides, graphene-iodide (GI) has performed remarkably well in cycle performance with its ability to retain capacity after subsequent charge/discharge cycles when compared to graphene bromide and graphene chloride.

We attempted to increase the cycle life and performance of our cathodes by using a technique to reintroduce oxygen functional groups on the GI basal planes. Through NO2 adsorption followed by UV treatment, we have been able to create carbon-oxygen functional groups to synthesize epoxidic, hydroxyl, and carbonyl carbon-oxygen bonds on graphene halides. This alternative method to oxidation uses fewer resources than the traditional Hummers method, which will reduce cost and environmental impact. The oxidized GI outperformed the non-oxidized GI based cathodes in its ability to maintain discharge capacity over time as seen in Figure 1. 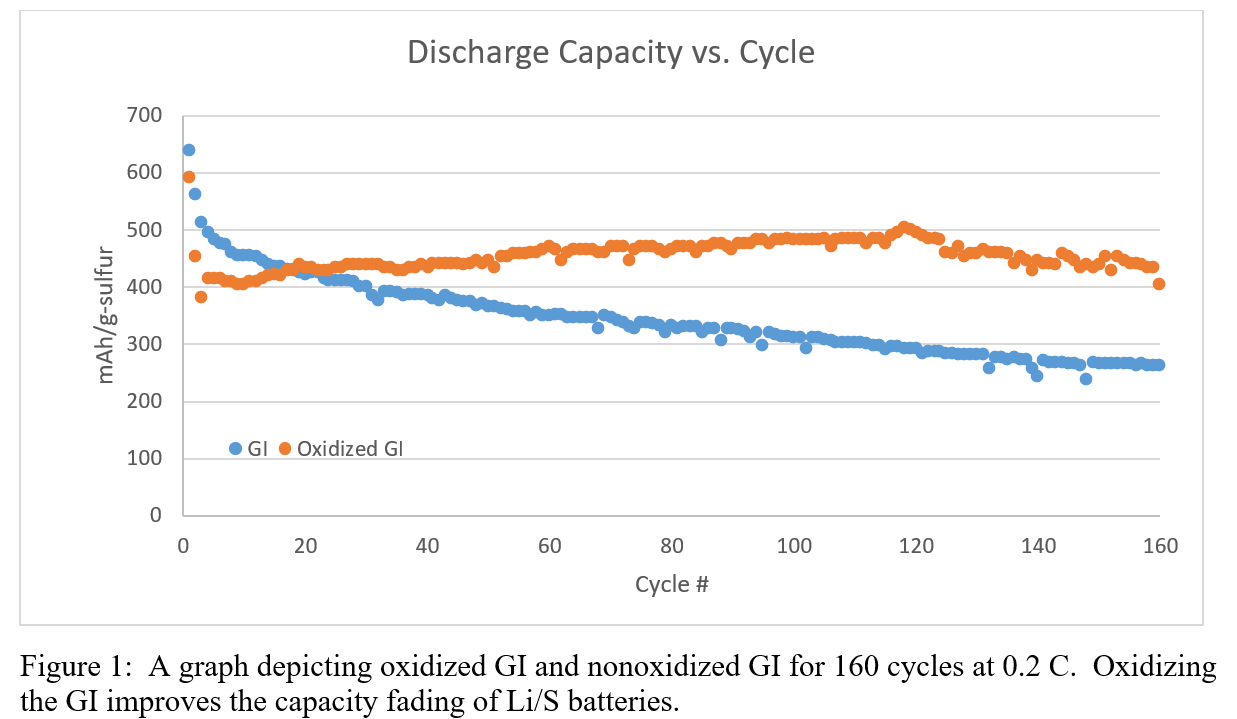