In this study, LZ91 magnesium alloys were used as experimental materials. This research is aimed on the development of the chromate-free conversion coating systems applied on LZ91 alloy, basing on permanganate conversion systems. Via the formation and protection mechanism of each system, the parameter optimization can thus be achieved. The changes of process will have evident effects on both growth behaviors and corrosion properties of the passive film on LZ91 alloys. The designs of the treating solution and post-treatments take into consideration to fit the dual-phase influence the microstructure of the coating. Additionally, to verify the subsequent applications, the preparation of the permanganate conversion coating with electroless nickel-phosphorus plating is employed to evaluate the corrosion resistance and feasibility.

The conversion treatment was conducted in the solution composed potassium permanganate (KMnO4) and cerium nitrate (Ce(NO3)3) with the pH approximately 2 at room temperature. After treatment, the LZ91 plate was activated in a solution at room temperature and pH = 2 with St-co-NIPAAm/Pd nanoparticles. Finally, the electroless plating layer was deposited on the samples, step sketches as shown in Fig. (a) [6-8]. Surface morphology, crystal structure and the coating composition were determined by SEM, TEM and XPS. The corrosion behavior of the coated samples was evaluated by potentiodynamic polarization, electrochemical impedance spectroscopy (EIS), and salt spray tests (SST). The results of the electrochemical measurement and SST demonstrated that the corrosion resistance of LZ91 alloy was markedly improved by the permanganate conversion treatment. However, results showed that the conversion/Ni-P composite-layer exhibited much worse corrosion resistance than that with only permanganate conversion coating. After a systematical investigation in corrosion behaviors, a possible mechanism for the deterioration of corrosion resistance is proposed in this study. 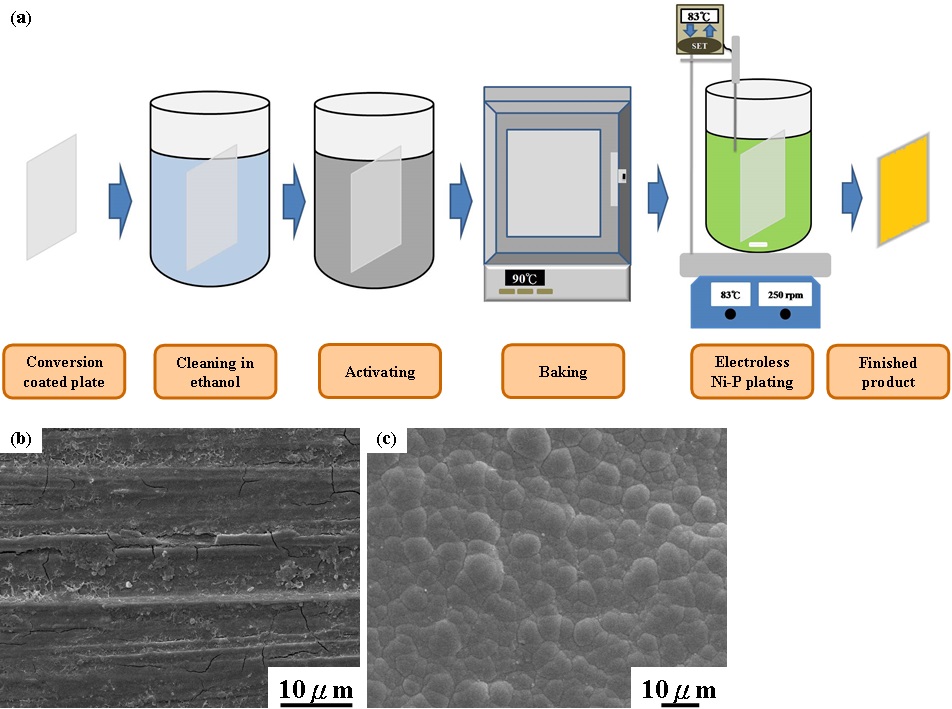