Grand Salon B - Section 7 (Hilton New Orleans Riverside)
J. Strobl and D. Scherson (Case Western Reserve University)
The heterogeneous dismutation of hydrogen peroxide (HDHP) in aqueous electrolytes is an important but rarely addressed process that can play a critical role in the analysis of the data for the oxygen reduction reaction (ORR). On this basis, it is essential to develop reliable experimental methods for determining its rates and their dependence on among other factors the composition of the electrolyte. A potentially powerful method to evaluate the activity of materials for the HDHP reaction introduced decades ago by Anson and coworkers [1] relies of the use of a ring disk electrode whereby the disk is made of the material to be examined and the ring is used to detect oxygen generated by the disk via the HDHP in peroxide containing solutions. As discussed in the aforementioned publication, the ring must be active for the ORR, but inactive for the reduction of hydrogen peroxide, i.e. a strict two-electron reducer. Such conditions were achieved in that work by employing a ring modified with a transition metal macrocycle found to display these rather stringent conditions. The strategy employed in our group, involves the use of a Se-modified Pt ring electrode and takes advantage of the ability of this surface to reduce rather exclusively dioxygen to peroxide demonstrated earlier in our group in efforts aimed at the development of an oxygen concentrator [2].

As shown in Figure 1, a Pt disk electrode covered by 0.34 ML of Se polarized at 0.175 V vs RHE in 0.5 M H2SO4 is capable of yielding mass transport limited currents for the 2-electron reduction of oxygen to hydrogen peroxide [2], as evidenced by the slope of the Levich plot for ORR. However, statistical analysis of these data indicated a small positive intercept. Additional experiments in which peroxide was intentionally added to the solution gave rise to a rather linear increase in the magnitude of the intercept with peroxide concentration, without changing the slope of the Levich plot. This interesting behavior suggests that although Se modified Pt is largely selective towards the 2 electron reduction of oxygen, hydrogen peroxide also yields a small amount of current via some unidentified reaction. Mechanistic investigations are currently underway, and the possibility of using this electrode for oxygen and peroxide detection is also under investigation. 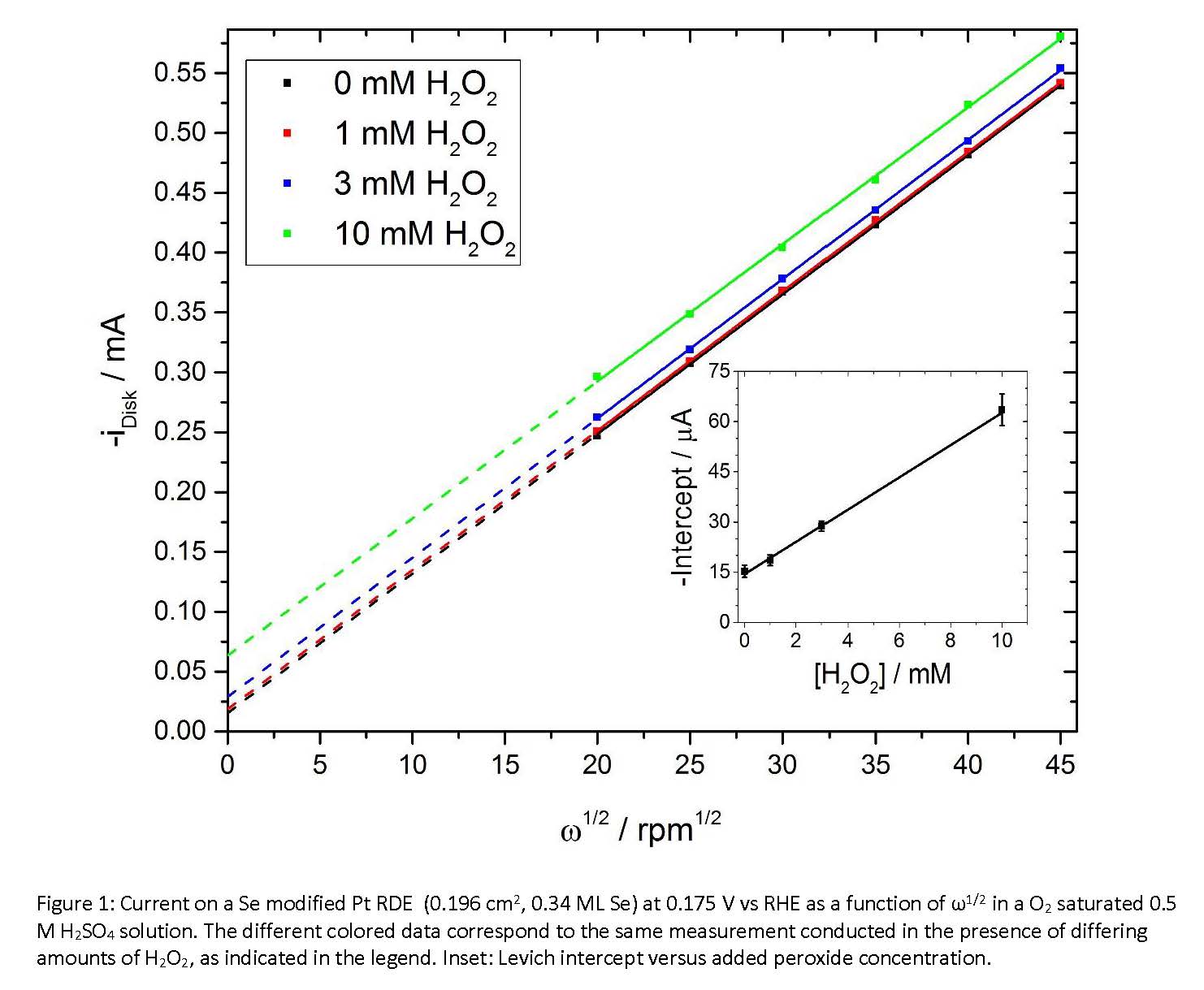