Grand Salon A - Section 6 (Hilton New Orleans Riverside)
M. Kodera, J. Seo, M. Katayama, T. Hisatomi, T. Minegishi, and K. Domen (The University of Tokyo)
Hydrogen produced from water using renewable energy has been investigated as a next-generation energy carrier. Photoelectrochemical (PEC) water splitting is a potential candidate for clean hydrogen production with reasonable cost. Considering utilization of sunlight as an energy source, photocatalysts need to absorb a wide range of visible light. SrNbO2N is an attractive material with an absorption edge of 690 nm and works as a photoanode in a PEC system.1 Photoelectrochemical properties of SrNbO2N particles are greatly affected by their oxide precursors and nitridation conditions. Therefore it is thought that understanding nitridation mechanism is a critical issue to activate PEC properties of oxynitrides. In this study, a novel oxide precursor SrNbO3 and subsequently nitrided SrNbO2N was investigated.

SrNbO3 oxide precursor was synthesized by a solid state reaction under an Ar flow.2 A mixture of Nb and Sr5Nb4O15 which was synthesized by calcining a stoichiometric mixture of SrCO3 and Nb2O5 in advance was heated under an Ar flow at 1773 K for 20 h. Obtained oxide precursors were nitrided under an ammonia flow at 1173 K for different time. Photoelectrodes of synthesized particles were fabricated by particle transfer method.3Nitridation process of oxide precursors were investigated based on X-ray diffraction, diffuse reflectance spectra and elemental analysis as which were combined oxygen-nitrogen analysis with inductively coupled plasma atomic emission spectroscopy (ICP-AES) as well as PEC properties.

SrNbO3 and SrNbO2N nitrided for more than 20 h both had a perovskite-type structure. At the initial stage of nitridation, however, SrNbO3 was separated to Sr5Nb4O15 and SrNbO3-xNy then gradually nitrided to SrNbO2N as shown in Fig. 1. This phase separation appeared due to introduction of N atoms to oxidize Nb4+ to Nb5+. According to progression of nitridation, photocurrent densities improved. This study shows the effect of oxide precursor on the PEC performance of resulting oxynitrides. Nitridation mechanism affected by the crystal structure of oxide precursors is also discussed. 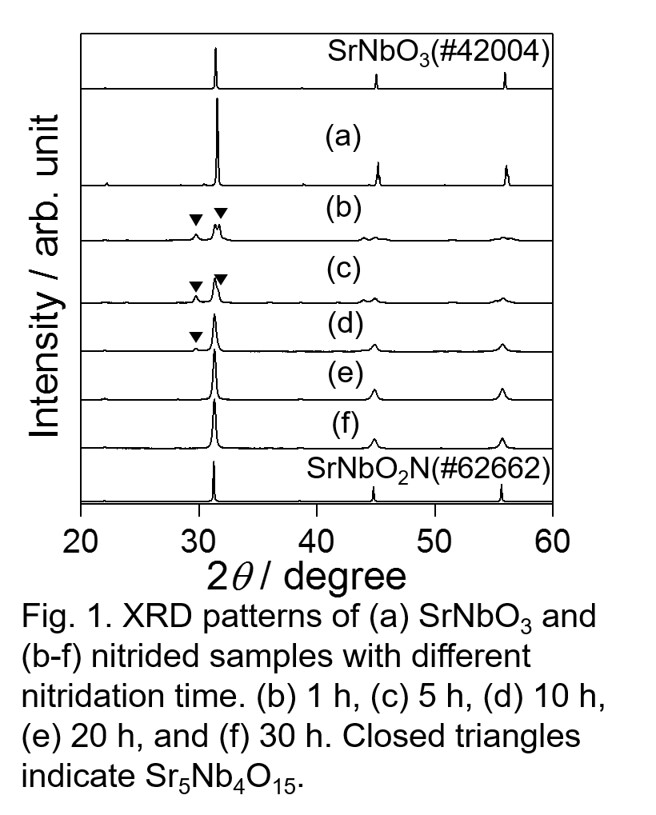