Grand Salon C - Section 15 (Hilton New Orleans Riverside)
T. Teufl (BASF SE, Technische Universität München), B. Strehle, D. Pritzl (Technische Universität München), S. Solchenbach (Technical University of Munich), F. F. Chesneau (BASF), H. A. Gasteiger (Technical University of Munich), and M. Mendez (BASF SE)
Lithium- and manganese-rich layered oxides, also referred to as high energy NCM (HE‑NCM), are a promising class of materials for applications in future Li-ion batteries. Due to their high specific discharge capacity (~250 mAh/g) and the high operating voltage, the energy density of next-generation batteries could be increased using these materials [1]. However, these materials exhibit several problems that hinder their commercialization such as low first cycle coulombic efficiency, poor rate capabilities, as well as a significant voltage-hysteresis between charge and discharge accompanied by a rapid voltage decay [2]. So far it is well known that the first cycle activation is a crucial step and strongly influences the further cycling performance of the material [3].

The activation plateau was initially referred to the activation of Li2MnO3 to electrochemically active MnO2 accompanied by a release of oxygen and excess lithium [1]. Strehle et al. [4] recently showed by on-line electrochemical mass spectrometry (OEMS) that the amount of released oxygen, for the material with intermediate Li2MnO3 content, is an order of magnitude smaller than the oxygen release expected for the bulk activation of Li2MnO3. Therefore, the oxygen release of the material seems to be related to oxygen depletion at the surface rather than to a conversion of Li2MnO3 in the bulk material. On the other hand, there is evidence that also changes in the bulk materials occur during activation, which might play a crucial role for the understanding of the material and the development of strategies to overcome these issues.

In this study, we compare different HE‑NCM compositions, i.e., different Li2MnO3 contents for xLi2MnO3•(1-x)LiMO2 (M = Ni, Co and Mn). In Figure 1, the potential curve for the first charge is shown for the three different materials, showing clearly the activation plateau at around 4.5 V vs. Li+/Li, extending over different capacity ranges for the three compositions. We further investigate the changes of lithium- and manganese-rich oxides using OEMS as well as other electrochemical methods, such as electrochemical impedance spectroscopy (EIS). From these comparisons we aim to get a profound understanding about the influence of the additional lithium within the materials. Furthermore, we expect to get evidence, which phenomena can be assigned to occur at the surface and which processes occur in the bulk material.

Figure 1: First cycle potential curves for different Li2MnO3 contents in HE‑NCM//Graphite full cells. The Activation was carried out at 25°C between 2.0 and 4.7 V at C/15. The data were collected in Coin Cells with Celgard separator.

The authors want to thank BASF SE for their financial support of this work.

Furthermore, we want to thank Dr. Karin Kleiner for the contribution to this work. 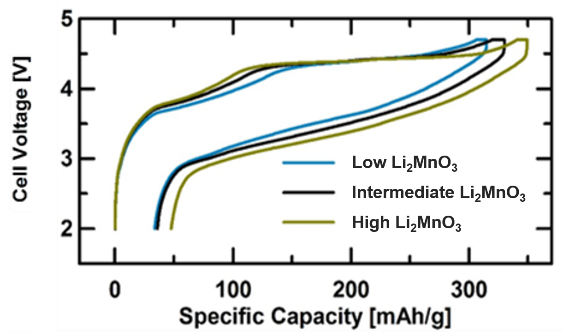