Electrochemical synthesis of polypyrrole in water containing anionic surfactants (polyvinylpyrrolidone or sodium diodecyl sulphate) results in formation of cone-like structures on the electrode surface. The size of these structures depends on the synthesis conditions such us, time of electrodeposition, concentration of monomer and surfactant, nature and concentration of supporting electrolyte. The charge transfer processes in the film of cone-like structures are much more reversible in comparison to the conventionally deposited polypyrrole. In this case, a significant improvement in electrical capacitance performance is also observed.

The composite of polypyrrole and mesoporous silica MCM-48, polypyrrole@MCM-48, was also prepared. The silica nanopores were impregnated with dichloromethane solution of pyrrole by the capillary effect and then monomer polymerised inside the silica pores. The polymer was deposited on the walls of mesopores. Therefore, mesoporous structure is preserved in the composite. The polypyrrole can be removed from the MCM-48 matrix by silica dissolution in an aqueous solution of NaOH. The polypyrrole forms spherical structures consisting of thin and long whiskers of the polymer. Both the whiskers of polypyrrole and polypyrrole incorporated into the pores of MCM-48 exhibit electrochemical activity due to polymer oxidation and the doping of the solid phase with anions from the solution. The electrochemical response of the polypyrrole extracted from the composite is superior to that of chemically synthesised bulk material and the polymer incorporated into a silica matrix. Such an improvement in the electrochemical properties of polypyrrole is particularly important for further practical application of this polymer in charge-storage and energy-conversion devices. 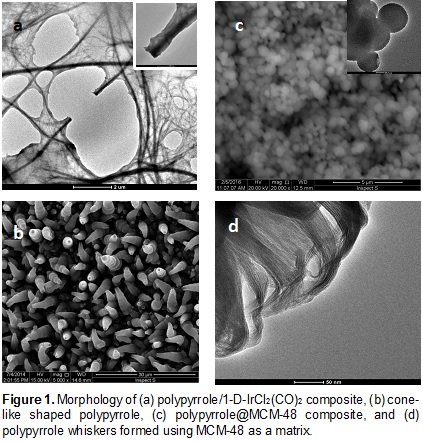