Grand Salon B - Section 7 (Hilton New Orleans Riverside)
P. Madkikar (Technische Universität München), M. Piana, T. Mittermeier, and H. A. Gasteiger (Technical University of Munich)
High cost and limited availability of platinum‑based catalysts for the Oxygen Reduction Reaction (ORR) is a major hurdle towards the commercialization of Proton Exchange Membrane Fuel Cell (PEMFC) systems. Until today, replacing Pt by Pt-free and finally by noble-metal-free ORR catalysts is still restricted to the laboratory scale. High activity and durability are the main requirements for new catalysts. The currently most favored materials are based on the MNxCy system (M = Fe, Co) due to their low cost and reasonable ORR activity, but they still cannot be commercialized due to their poor stability in corrosive environment [1, 2]. On the other hand, valve‑metal oxides as non‑PGM ORR catalysts are promising based on their stability in acid, but their ORR activity still needs to be improved [3, 4].

Recently, our group published an article in which the synthesis of carbon-supported zirconia (ZrO2) nanoparticles has been optimized towards ORR activity by varying the heat treatment atmosphere and temperature [5]. Based on our findings, we concluded that the intrinsic ORR activity of the pure valve‑metal oxides is far too low to be practically employed in fuel cells. Since it is hypothesized that the active sites correlate with the presence of oxygen vacancies or uncoordinated metal sites at the oxide surface [6, 7], a way to enhance their ORR activity would be to substitute part of the valve metals in the oxide with aliovalent metals. In this study, we have chosen iron as a substituent, since it is ORR‑active and since it is known that it can be incorporated into the ZrO2 structure [8].

In this contribution, a series of ORR catalysts consisting of Fe containing ZrO2 nanoparticles and supported on graphitized Ketjen-Black carbon (ZrO2/KBGraph) are studied. In order to get a homogeneous mixture of the two metals at the molecular level, the synthesis route employed two soluble organometallic precursors, viz., zirconium (IV) tetra-tert-butyl dichloro phthalocyanine (ZrCl2Pc(tBu)4) and iron(II) tetra-tert-butyl phthalocyanine (FePc(tBu)4). The carbon support was first impregnated with the mixed precursor solution and then heat-treated as described in [9]. From XRD characterization it is evident that we obtain ZrO2 particles with a particle size much smaller than 10 nm.

Electrochemical measurements of the ORR activity are performed at 20 °C using a thin-film rotating disk electrode (RDE) setup in 0.1 M HClO4 at 20 °C, 1600 rpm, reporting the capacitively‑corrected anodic scans [10]. As shown in Figure 1, the carbon‑supported nanoparticles prepared by adding Fe to ZrO2 show a significantly increased activity when compared to pure Fe or ZrO2 samples heat treated under the same conditions. It is thus evident that a clear synergistic effect between the two components results in a much more ORR‑active catalyst. A detailed structural characterization of the active catalyst and their further optimization will be the focus of this presentation.

This work was supported by the Bayerische Forschungsstiftung (Project ForOxiE², AZ 1143-14). We thank Dr. Marianne Hanzlik for the superb TEM images. 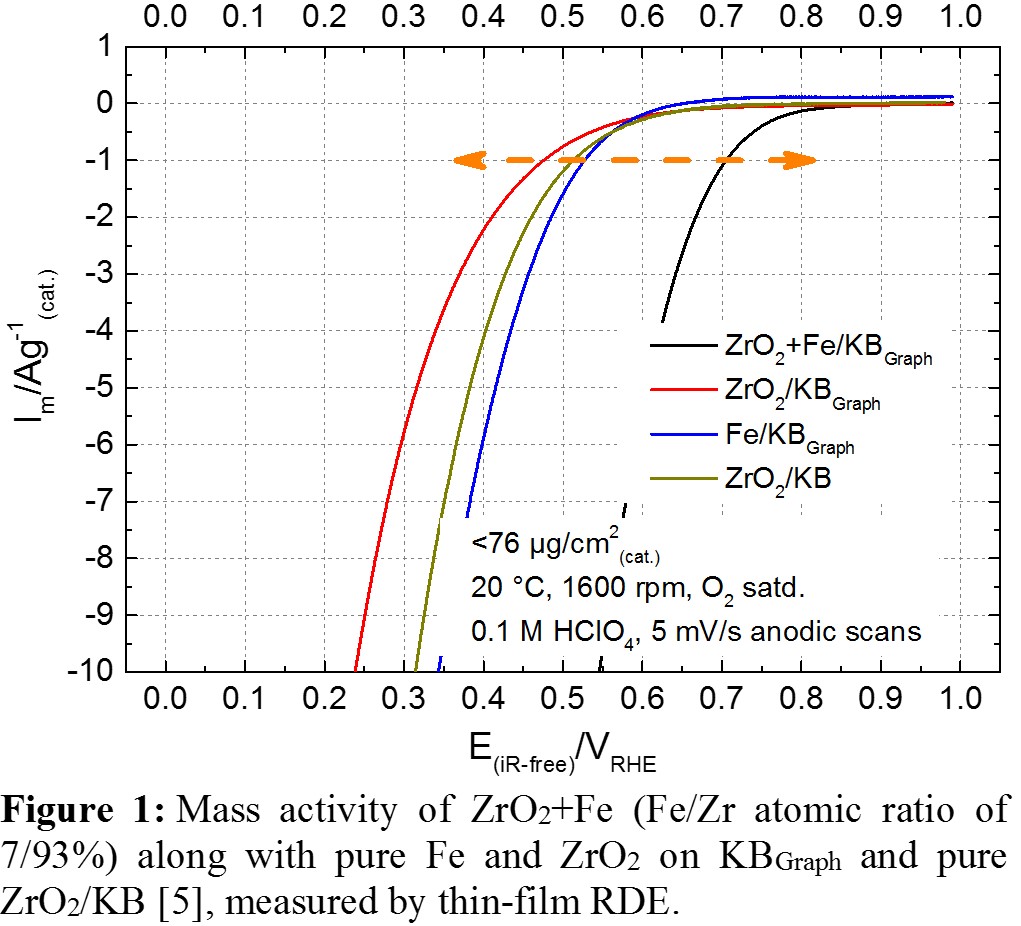