Grand Salon D - Section 19 (Hilton New Orleans Riverside)
P. Vanýsek (CEITEC - Central European Institute of Technology), V. Novák (CEITEC), K. Částková (CEITEC - Central European Institute of Technology), and L. Chladil (CEITEC BUT, Brno University of Technology)
Materials based on cubic ZrO2 stabilized with Y2O3 have good ionic conductivity at higher temperatures, which makes them suitable or promising candidates for use as a membrane in the solid oxide fuel cells (SOFC). The zirconia materials are mainly used as a compact ion conductive membrane, allowing the separation of the positive and negative electrodes while allowing ionic conduction via the oxygen ion. Another possible use in SOFC consists in the idea of creating a highly porous structure coated with a suitable catalyst (e.g., Ni) for the negative electrode. This would lead to a rapid increase in the active surface of the electrode and thereby increase the nominal current density of the fuel cell. The fibrous structure and its large porosity, while ionically bonding, appear to be very suitable for this purpose.

The methods of forming fibers in our laboratory are both the force spinning and electrospinning. From the spinned nanofibrous materials we prepared disc samples (pellets) with opposite flat sides coated with a conductive platinum paste and wee annealed. The prepared samples were contacted using platinum mesh electrodes (a two-electrode connection) to the heated chamber of instrument ProboStat (Dept. of Chemistry, University of Oslo). The whole probe device shrouded in ceramic tube was inserted into a tubular furnace. The sample was held at different temperatures and the impedance spectroscopy data were obtained for a series of temperatures. From this the total impedance of the system, as a function of temperature, was collected. A relative simple equivalent circuit was used to fit the data end extract mostly the conductivity of the sample at each given temperature. Impedance was collected using spectrometer Solartron 1260 at suitable temperature steps (usually 25 ° C) at AC amplitude 100 mV. The equivalent circuit fit was done using ZView (Scribner Associates). Fig. 1 shows an example of impedance plot compared for a bulk (nonfibrous) substrate and one, with prepared from the fibrous material.

The conductivity of ceramic materials is a thermally activated process, and therefore depends on temperature. Thermal conductivity changes are often described using the Arrhenius. In this case, the dependence of the logarithmic conductivity changes upon change of the inverse of the absolute temperature is linear and from the slope of the Arrhenius plot one can calculated the activation energy of the process (Fig. 2). From the figure it is apparent that the bulk and the fibrous material the activation energies are essentially identical, while the actual conductivities are significantly different for each; expectedly lower for the fibrous substrate. 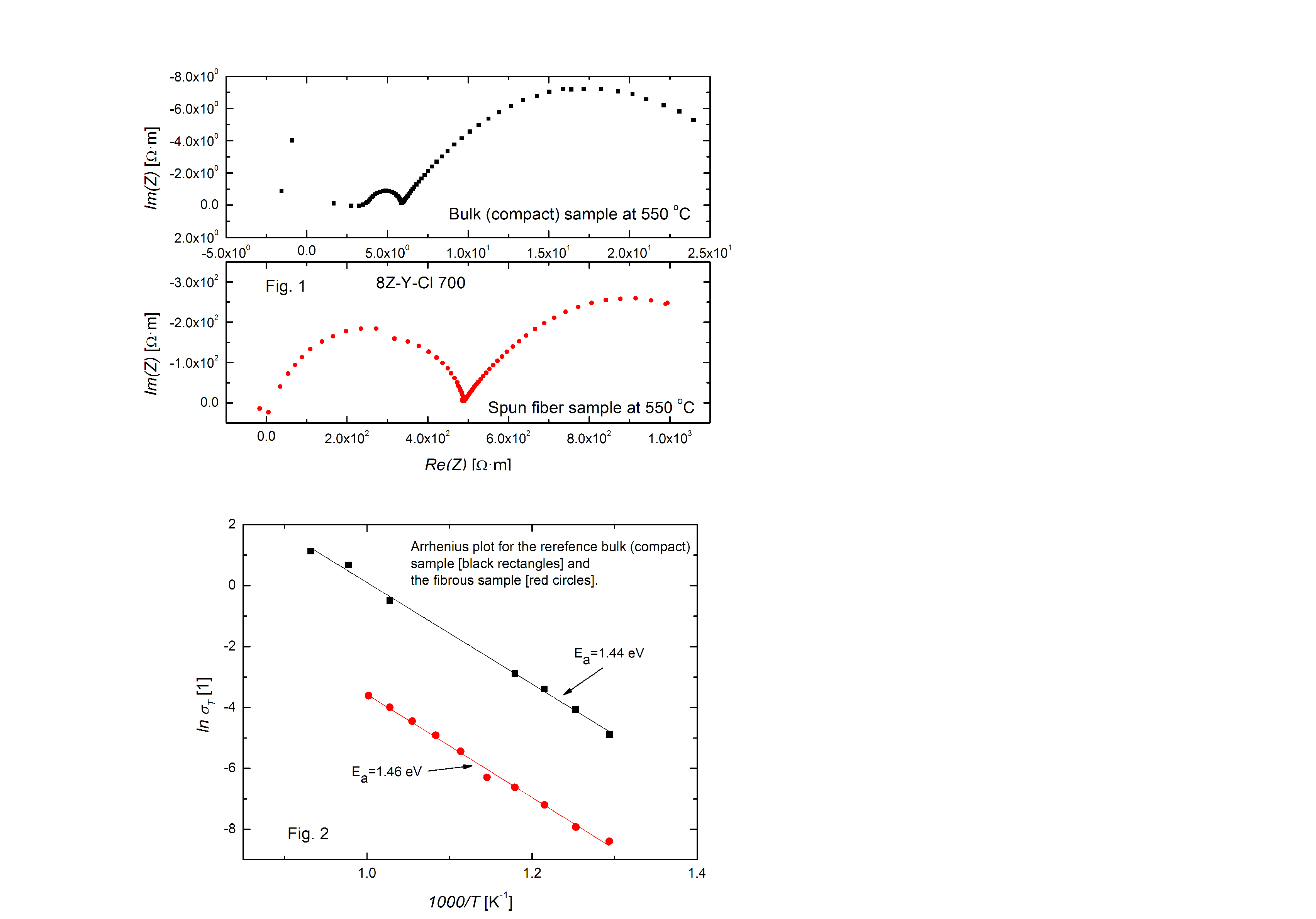