We propose a new method to improve resistive switching properties in the HfO2 based CBRAM crossbar structure device by inserting a TaN thin layer between the Cu top electrode and HfO2 switching layer. The Cu/TaN/HfO2/TiN device structure exhibits high resistance ratio of OFF/ON states without any degradation in switching during endurance test. The switching mechanism in the Cu/TaN/HfO2/TiN device can be attributed to the conductive bridging of Cu metal ions.

Electrochemical metallization bridge (EMB) RRAM, referred in literature as Conductive Bridge RAM (CBRAM) or Programmable Metallization Cell (PMC), utilizes electrochemical control of nano-scale quantities of metal in thin dielectric films or solid electrolytes to perform the resistive switching operation. Due to key advantages such as scalability, low-voltage, fast-write operation and long endurance lifetime, CBRAM technology has shown considerable progress in recent years [1-4]. However the random nature of formation and rupture of conductive filament makes their formation difficult to control, which results in a large variation of switching voltages and resistance states in CBRAM device. We report a highly efficient and convenient approach to control the formation and rupture of CF by introducing a thin TaN layer between the HfO2RS layer and top electrode (TE).

A schematic configuration and top view of the Cu/TaN/HfO2/TiN crossbar device is depicted in Fig. 1. The typical forming processes and switching of the Ti/HfO2/TiN, Cu/HfO2/TiN and Cu/TaN/HfO2/TiN devices are shown in Fig. 2. A large forming voltage of about 6.3 V is observed on the Ti/HfO2/TiN, while only about 2 V is needed to switch the Cu/HfO2/TiN from initial high resistance state to low resistance state. In the Cu/HfO2/TiN device, the forming process involves injection of Cu ions into the HfO2 layer without causing electrical break-down while in the Ti/HfO2/TiN, a soft break-down of the dielectric is part of the forming process. In CBRAM, a Cu cation is the mobile species responsible for resistive switching, instead of an oxygen anion. The switching mechanism is the electrochemical ionization of the mobile species, followed by drift under the applied electric field. The current-voltage characteristics of both O-RRAM and CBRAM are similar, exhibiting voltage-driven forming, set and reset events, as shown in Fig.2. A primary distinction between the two devices is the read ratio. Cells operated with same ICC, show read ratios of ~100x and >1000x for O-RRAM and CBRAM respectively. Figs. 3 show the DC sweep endurance of O-RRAM and CBRAM devices. Clearly, the Cu/TaN/HfO2/TiN device shows much better endurance than the Cu/HfO2/TiN one. The memory window remains > 1000x after 1000 switching cycles in Cu/TaN/HfO2/TiN device.

The resistive switching mechanism is explained in HfO2 based CBRAM devices. Compared with Ti top electrode, the Cu top electrode structure exhibits higher resistance ratios of HRS/LRS. In addition, the Cu/TaN/HfO2/TiN structure demonstrates the stable DC sweep endurance up to 103 cycles. From the electrical characteristics, the proposed device exhibits the potential for future nonvolatile memory applications. 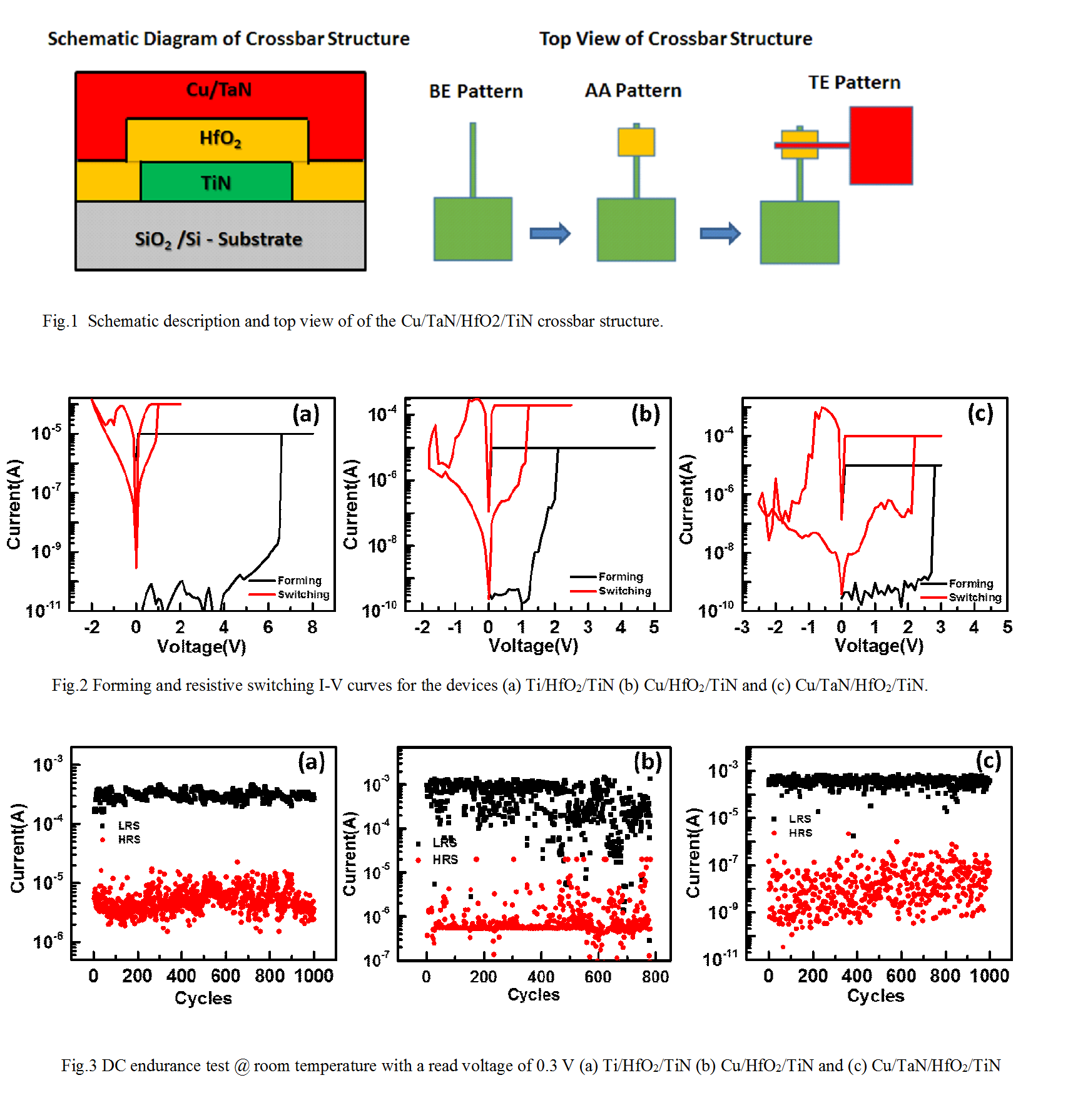