Grand Salon C - Section 18 (Hilton New Orleans Riverside)
P. R. Chinnam and S. Wunder (Temple University)
In order to make safe and efficient lithium /lithium ion batteries (LIBs) or sodium/sodium batteries (SIBs) in the future, particularly for large scale energy storage and for electric (EV) or hybrid (HEV) electric vehicle applications, a key component is a solid separator between the anode and cathode, since it would allow the safer use of Lio or Nao, which would markedly increase energy density and specific capacit(by 10 fold for a given cathode material) compared with Li+ intercalation anodes. The use of Li0 is essential to achieve the theoretically predicted high specific energy in Li-O2and Li-S batteries.

Currently, there are two main approaches to the development of solid separators, namely the synthesis and use of (i) ceramic materials, sometimes referred to as lithium ion conducting glass ceramic (LICGC), and (ii) solid polymer electrolytes (SPEs) with dissolved bi-ionic LiX or with pendant anions (referred to as polymer SICs)1. The advantages of ceramic electrolytes (high conductivity (s), tLi+= 1) and polymer electrolytes (flexibility, adhesion to electrode, electrode stability) would be ideal in a hybrid separator, but ionic ceramics and organic polymers are inherently incompatible, so there is typically a high interfacial resistance between them.

For pure inorganic and organic electrolytes, sLICGC >> spolymer, so that increased volume fractions of the LICGC are desirable. At small volume fractions of the LICGC, the conductivity increases are only comparable to those obtained by adding inert inorganic fillers such as SiO2, TiO2 and Al2O3 to polymers (usually PEO/LiX), where composite ionic conductivity increases by suppression of the PEO crystallinity or by decreasing the affinity of the anion for the Li cation. At large volume fractions of LICGC, stotal → sLICGC is almost never realized and the polymer appears to act as a binder for the grains with conductivities 10-100 fold less than the LICGC. This decrease has been attributed to an inability of the Li+ (or Na+) ions to cross the ceramic-polymer interface (resulting in high interfacial resistance), with one factor a lack of intimate interfacial contact between the phases.

In order to solve the high interfacial resistance problem, we have investigated a general approach (as shown Figure 1) to form an interface that would be applicable to a wide range of hybrid systems, and one that would also prevent LICGC corrosion by Li0. Briefly, we sputter coated a 200 nm thick SiO2 coating onto a commercial LICGC, and silanated it with polyethylene glycol (PEG)-silane in the presence of LiTFSI. SEM (Figure 1 Bottom A and B) images of the SiO2 layer clearly show a conformal coating of the SiO2 on the LICGC, while the top views of this coating suggest that it is deposited with ~ 100 nm grains between which are channels. After silanization, there are covalently attached PEG chains to the SiO2 and a smooth “polymer” coating is also formed from hydrolysis and cross-linking of the PEG-silane (Figure 1 Bottom C). The covalently attached PEG chains permit Li+ion diffusion through the interface. (O/Li = 12/1). The formed composite inorganic-organic

electrolyte has low interfacial resistance (as shown in Figure 2). The thin film coating allows the hybrid composite membrane to adhere to Li0 metal, prevents corrosion of the LICGC by the Li0 metal, and is stable with Lioelectrodes. A film made with the PEG-silane in the presence of LiTFSI was a self-standing soft rubber.

In summary, we have developed a general approach to form an interface between ceramic and solid polymer electrolytes which ultimately improves the stability of ceramic electrolytes with Lio electrodes and decreases the interfacial resistance between the polymer and ceramic.

The financial support of the National Science Foundation, Award CBET 1437814 is gratefully acknowledged. 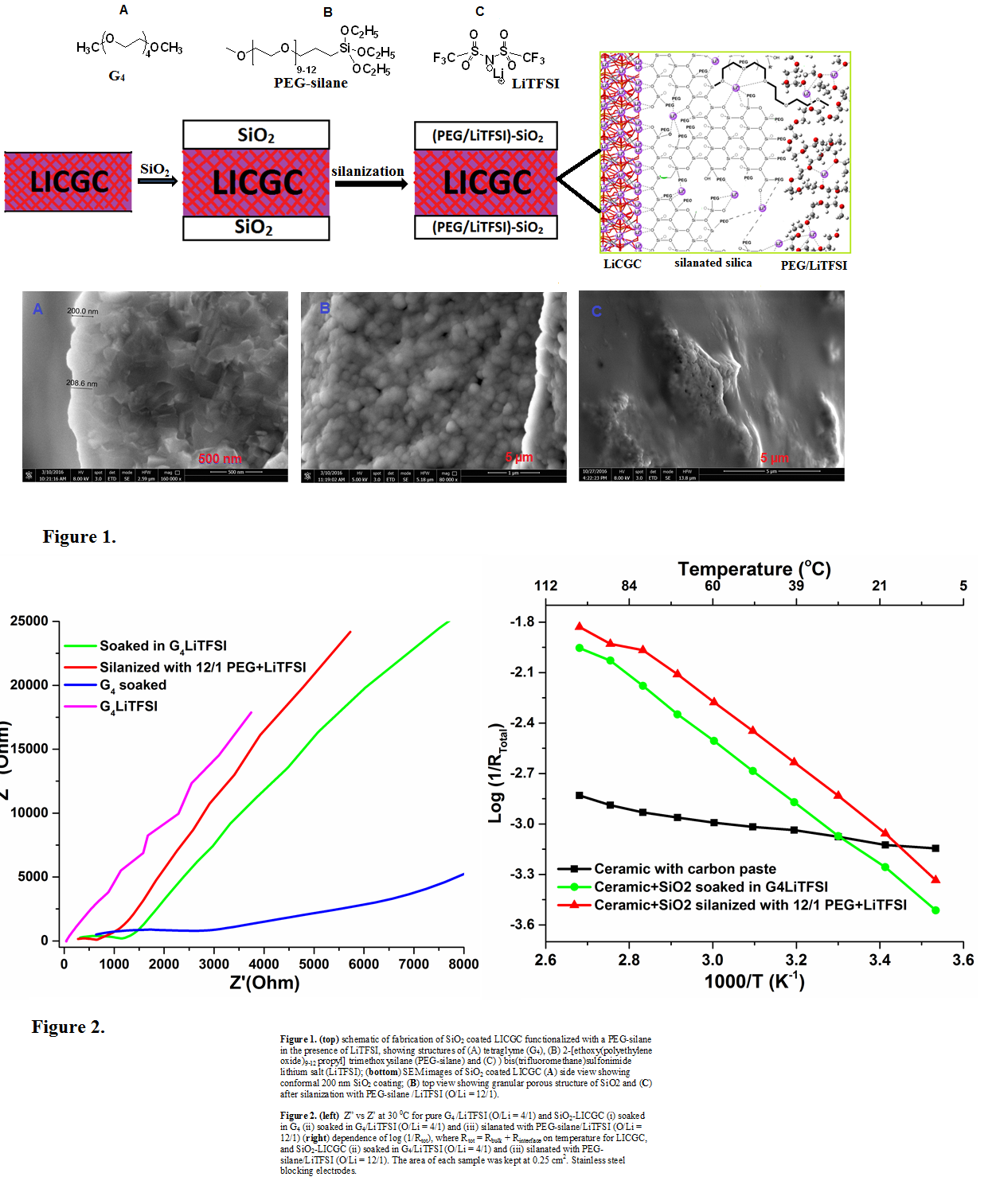