Grand Salon B - Section 7 (Hilton New Orleans Riverside)
L. Song, M. B. Vukmirovic, and R. R. Adzic (Chemistry Department, Brookhaven National Laboratory)
Proton exchange membrane fuel cells (PEMFCs) have gained extensive attention as one of the most promising technologies for transportation due to their high energy generation efficiency and low environmental impacts. However, there’re still many technical difficulties and challenges hindering their widespread commercial application, among which the most important ones are high loading (high cost) of Pt [1] and its dissolution [2] during fuel cell operation on the cathode side of fuel cell.

The approach of synthesizing electrocatalysts with a monolayer of Pt provides an effective way of reducing Pt contents while maintaining or even improving their electrochemical activities for oxygen reduction reaction (ORR) [3]. However, in addition to have beneficial catalytical influence on Pt shell, the material from which the cores are made, must be stabile in highly oxidative environment of the fuel cell cathode.

Pt monolayer (PtML) catalyst deposited on Pd and Pd-based alloys cores showed higher ORR activity and stability compared to a pure Pt catalyst [2, 4]. Due to the incomplete Pt shell, Pd (a noble metal) shows some instability under the prolonged highly oxidizing conditions that can occur during fuel cell operation. Since Ir is one of the most stable transition metals, some research has been conducted on PtML catalysts deposited on Ir and Ir-M (M=Fe, Co, Ni, Cu) alloy nanoparticle substrates [5, 6].

In this work, low-Pt content catalysts consist of a PtML on carbon-supported IrPd (IrPd/C) and IrPd-shell Ni-core (IrPd/Ni/C) nanoparticles were examined for ORR activity and stability. IrPd/C nanoparticles, with molar ratio of Ir:Pd=1:4, were prepared using PdCl2 and (NH4)2IrCl6 as metal precursors, citric acid as a complexing agent, and NaBH4 as a reducing agent. The IrPd/Ni/C nanoparticles were synthesized by first preparing Ni nanoparticles supported on carbon (Ni/C) which were subsequently immersed in solution containing Pd and Ir ions (Ir:Pd=1:4) to form PdIr shell by partially galvanically displacing Ni. After that, IrPd/C and IrPd/Ni/C nanoparticles were filtered and dried in vacuum oven. At the end, they were annealed in pure H2 atmosphere at 550°C for 2 hours. The PtMLIrPd/C and PtMLIrPd/Ni/C catalysts were prepared by depositing a Pt monolayer onto these particles by displacing a Cu monolayer formed at underpotentials in 0.05 M CuSO4 and 0.1M H2SO4 solution.

The average diameter of IrPd/C nanoparticles is ~ 4 nm (Fig. 1) while for the IrPd/Ni/C nanoparticles is ~ 10 nm (not shown). Polarization curves showed that both the catalysts of interests in this work have better ORR activities than PtML catalysts deposited on commercial Pd/C (30wt% NE-H) (PtMLPd/C). The half-wave potentials and initial Pt mass activities of PtMLIrPd/C (882 mV, 1.71 A/mgPt) and PtMLIrPd/Ni/C catalysts (877 mV, 1.61 A/mgPt) are much high than those for PtMLPd/C (854 mV, 0.555 A/mgPt) (Fig. 2). Moreover, after 5,000 cycles of accelerated durability test, the PtMLIrPd/C still has a relatively high Pt mass activity of 1.16 A/mgPt, while that of PtMLIrPd/Ni/C drops to 0.775 A/mgPt but still exceeds the DOE 2020 technical targets for electrocatalysts for transportation applications [7]. More detailed discussion on the ORR activity and stability of these catalysts will be presented at the meeting.

This manuscript has been authored by employees of Brookhaven Science Associates, LLC under Contract No. DE-SC0012704 with the U.S. Department of Energy. The publisher by accepting the manuscript for publication acknowledges that the United States Government retains a non-exclusive, paid-up, irrevocable, world-wide license to publish or reproduce the published form of this manuscript, or allow others to do so, for United States Government purposes. 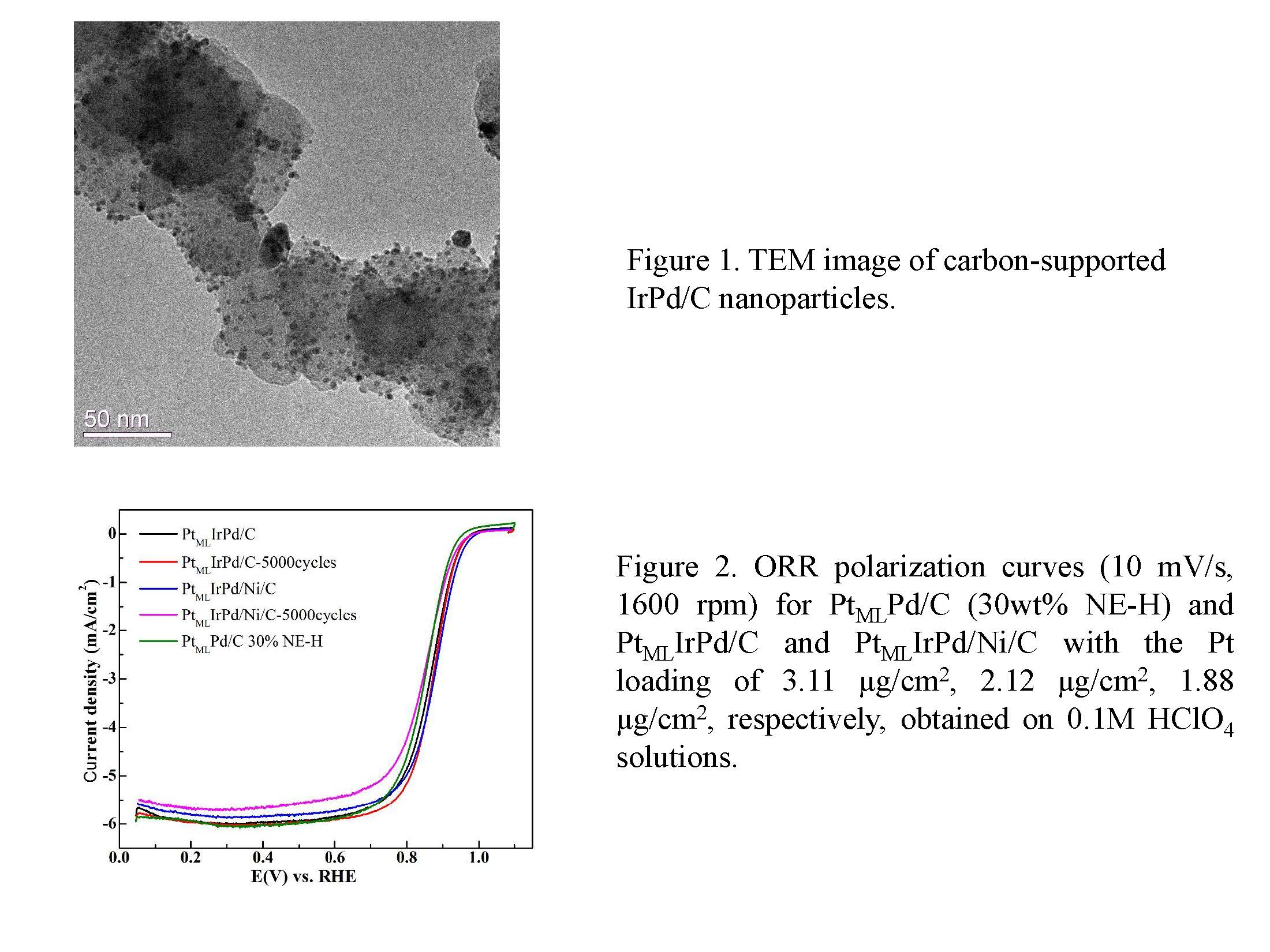