1835
Trade-Off Between Transport and Mechanical Properties in Ion-Containing Block Copolymers with Different Self-Assembled Morphologies: A Comparison Study Between Lamellar and Inverse-Hexagonal

Grand Salon C - Section 16 (Hilton New Orleans Riverside)
W. Zheng and C. Cornelius (University of Nebraska-Lincoln)
Both transport and mechanical performances are required for ion-containing polymers to be successfully used in ion-conducting applications such as fuel cells, actuators and electrodialysis. Phase-separated structure with ion and non-ion domains has been proposed to meet this requirement because these two domains can accommodate the ion and solvent transport and provide mechanical support respectively. The self-assembling nature of block copolymers is therefore used to create ion-containing polymers with well-defined phase-separated morphologies. The morphologies with continuous ion-domain are usually designed to enhance ion transport (1), however more attention may be needed on the trade-off between transport and mechanical properties. We have found out that the mechanical property is poor for some morphologies with continuous ion domain even though the ion domain is still the minor phase compared to the non-ion domain.

Due to the electrostatic ion interaction, ion-containing block copolymers display more complicated phase behaviors and generate morphologies beyond that of neutral copolymers (2). Among them, inverse-hexagonal (HEX) structures have been widely prepared (3-5). It has the major non-ion block form the ‘bulk-like’ cylinders residing in the ‘surface-like’ minor ion phase. Our experimental observation indicated that this inverse-HEX morphology may suffer from excessive water swelling when placed in liquid water environment.

In our work, the ion-containing block copolymer under study was supposed to form lamellar morphology according to the block copolymer phase diagram, however it generated a mixture of lamellar and inverse-HEX morphologies when casting from a polar solvent. The formation of inverse-HEX was suppressed when adding a little nonpolar solvent for casting. These two morphologies were imaged by TEM as shown in Figure 1. They are both in principle ‘percolating’ structures for ion transport. Although the membrane with a mixture of lamellar and HEX structures did display higher ion-domain connectivity than the pure-lamellar one as per our preliminary dynamic tension test, its ion conductivity under low water activity (in water vapor) and its water vapor transport flux are very close to the pure-lamellar one. This inconsistency may be because of the larger ion to non-ion interface within the inverse-HEX structure, resulting in more interface resistance. Only under high water activities (more than 0.95), the one with inverse-HEX displayed larger conductivity than the pure-lamellar one, probably due to more effective swelling of the hydrophilic phase for the former. And if the water vapor transport was measured with liquid water contacting one side of the membrane, the one with inverse-HEX had larger flux. Water sorption experiment showed that the one with HEX morphology swell more than the pure-lamellar one. And we actually observed the HEX membrane broke apart after placed in liquid water for 2 month while the pure-lamellar one was still intact. Thermodynamic swelling model considering both interface energy and elastic energy is being developed to explain the difference between inverse-HEX and lamellar morphologies. 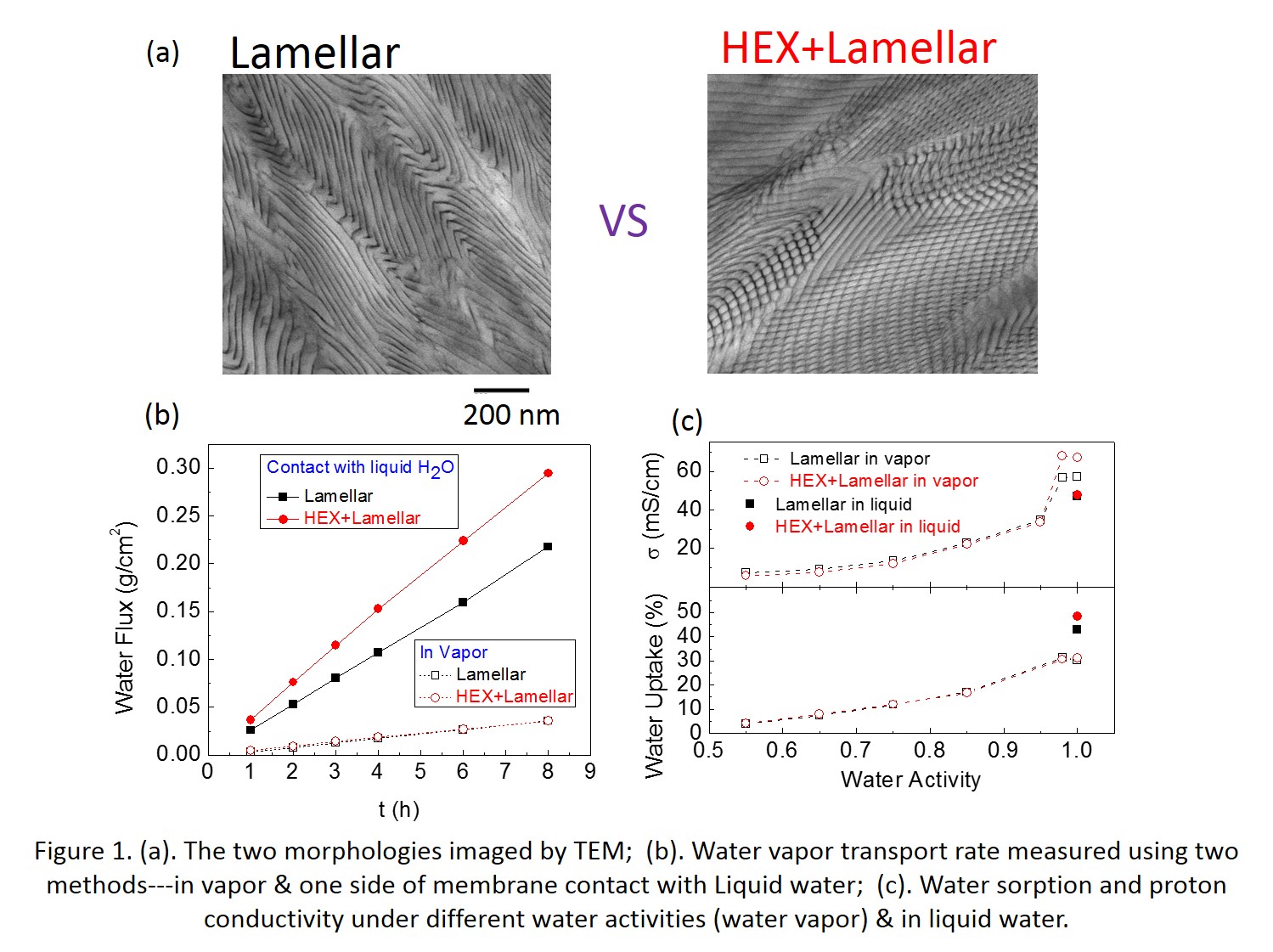