1414
Catalytic and Mass Transport Effects of Carbonate Ions at an Anion Exchange Membrane Interface (PGM vs. non-PGM) for a Practical and Efficient Water Splitting Cell

Grand Salon A - Section 3 (Hilton New Orleans Riverside)
H. Doan, J. Malley, T. Jankins, C. Lin, A. Primbetova, and S. Mukerjee (Northeastern University)
Anion-exchange membranes (AEMs) provide an attractive alternative future for fuel cells as well as electrolyzers (i.e.,hydrogen production). To gain higher efficiency as well as reduce costs in electrochemical water splitting, NUCRET has successfully developed high performance non-PGM catalysts for hydrogen evolution reaction (HER) and oxygen evolution reaction (OER) that are compatible for AEM solid polymer electrolytes (specifically, A-201, Tokuyama, Japan). These catalysts are 60% Ni-Cr/C for HER and 40% Ni-Fe/Raney-PANI for OER. Figure 1 shows the superiority of these non-PGM catalysts in a full cell operation at 50°C, when compared to the baseline PGM catalysts: Pt and IrOx. However the role of presence of carbonate ions at the anode interface is not fully understood. This is especially important considering the potential of a mixture of carbonate/bicarbonate. Among the various possible explanations are the Donnan exclusion effect, where the H+ ions are excluded from the membranes, increase in pore solution pH hence enhancing multi charged anions, especially towards higher current densities. In the latter case the anion composition inside the AEM becomes a mixture of only carbonate/hydroxide ions due to the progressive production of hydroxide ions at the HER side (cathode side). Detection of carbon dioxide in the anode exhaust in such conditions further suggests the presence of carbonate ions as charge carriers and supports equation 1 over equation 2 as the anode reaction.

However, testing under single cell conditions using a commercially available AEM (Tokuyama Corp., Japan, A201 membrane), we discovered that feeding the anode side (OER side) with 1% K2CO3 resulted in a decreased cell voltage by up to 400 mV, compared to the traditional DI water feed. Under this new feeding condition, the cell voltage was below 2 V at current densities in excess of 200 mA/cm2. Moreover, this performance was found to be stable for prolonged operation over several hundred hours. This test, conducted by our validation partner Proton On-Site (Wallingford, CT), is in variance to conventional thinking on the negative effect of carbonate formation. We believe that feeding 1% carbonate in the anode side does not interfere with the OER mechanism but further improves the conductivity of the AEMs system.

In this study, half-cell analysis using OER and HER catalysts (PGM vs. non-PGM) was conducted, and full cell data was obtained. This presentation will provide detailed interfacial perspectives by four studies. The first study will comprise of an RDE experiment using various electrolytes containing KOH, K2CO3 and mixtures thereof. The second study will be conducted using a unique solid-state cell design to understand catalyst, ionomer and membrane interfaces. The third study will be done using a micro-electrode to combine simultaneous mass transport and kinetics at the membrane interface. The final study will compare the solid cell, or full water splitting cell using an A-201 membrane, vs. a liquid cell (H2 pump and O2pump) or half-cell using conducting carbonate/hydroxide electrolyte chamber attached to Hg/HgO reference. 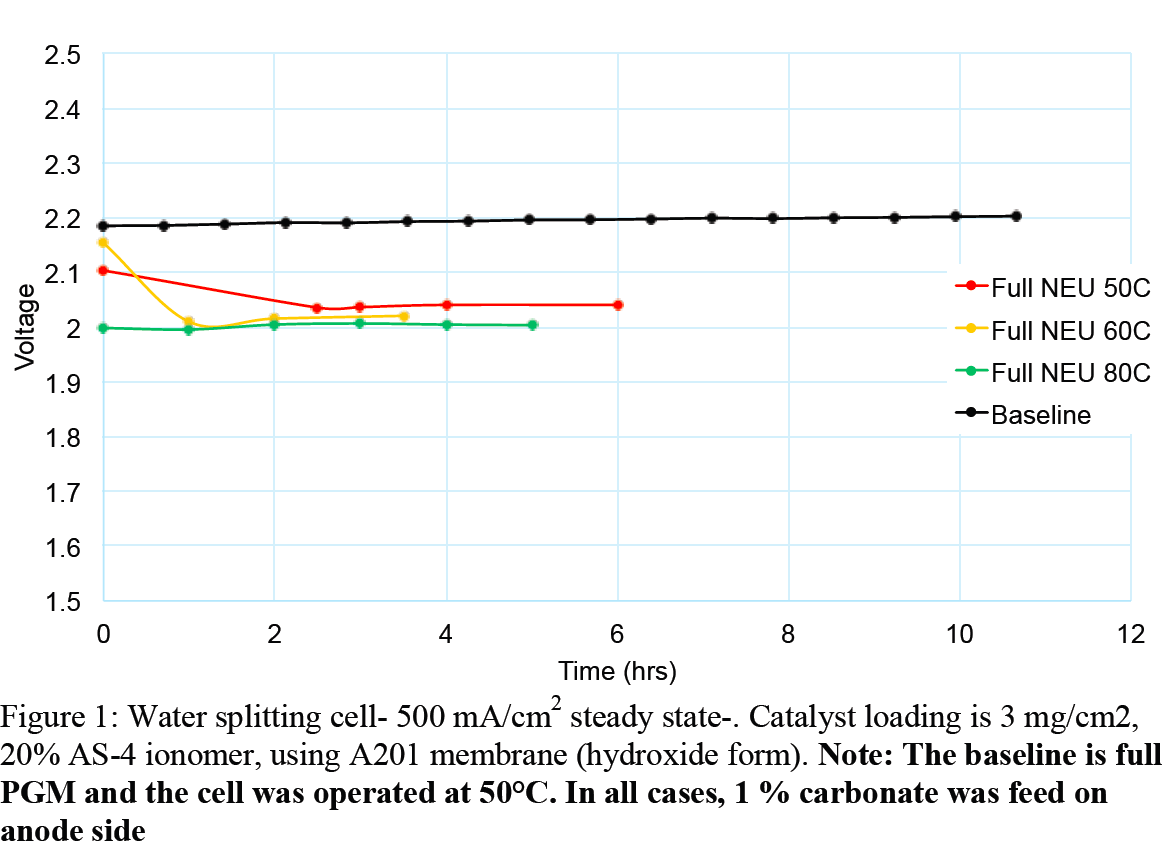