Grand Salon B - Section 7 (Hilton New Orleans Riverside)
H. H. Hoe and D. W. Kirk (University of Toronto)
The growing biodiesel industry leads to an excess production of glycerol by-product which is of low value but costly to store or dispose because glycerol is not suitable as fuel due to its sooty flame while its discharge to water leads to eutrophication. On the other hand, industrial carbon dioxide could be readily captured by scrubbing with potassium hydroxide to form potassium carbonate. With the tightening of greenhouse gas emission standards and the introduction of carbon cap and trade quota, carbon utilization becomes increasingly important both on environment and economic perspective. The combination of glycerol and carbon dioxide, in the form of dissolved carbonate ions, to produce glycerol carbonate would solve both glycerol and carbon dioxide emission problems altogether. In addition, glycerol carbonate is a valuable chemical feedstock in high industrial demand for its widespread use as solvents, surfactants, chemical feedstock and polymer materials.

The electrosynthesis of glycerol carbonate has been performed under ambient temperature and pressure on nickel plate electrodes, using potassium carbonate dissolved in glycerol with varying water dilution. The formation of glycerol carbonate was confirmed by both the characteristic peak on Cyclic Voltammetry and the Liquid Chromatography-Mass Spectrometry (LC-MS) analysis. Interestingly, comparison of LC-MS spectra with the analytical standard showed the carbonate insertion into glycerol molecule to be regiospecific, producing exclusively the more common and valuable 5-membered-ring glycerol 1,2 carbonate, instead of 6-membered-ring glycerol 1,3 carbonate. Based on this observation, it was postulated that the reaction occurred by simultaneous attack of 1,2 -OH groups of glycerol, making 1,3 bond formation impossible due to insufficient molecular “arm” length of carbonate species. LC-MS analysis revealed further C=O bond hydrogenation of glycerol 1,2 carbonate to 4-(Hydroxymethyl)-1,3-dioxolan-2-ol and dimerization of glycerol carbonate. The glycerol carbonate hydrogenation was found to be favorable under low current density such that most of glycerol carbonate formed was hydrogenated. The color change from colorless to brown of reaction mixture indicated the electrochemical dehydrogenation of glycerol to acrolein followed by subsequent polymerization to brown polyacrolein as by-product, similar to the color change observed for mixture after intense heating. Under high current density, both the polyacrolein formation and the hydrogen evolution were found to be more prevalent due to a combined effect of electrochemical polarization and local resistive heating, reducing reaction selectivity and energy efficiency. Addition of water is found to be beneficial by reducing heating requirement, resistive loss and side reactions.

From the results, the novel electrochemical upgrading of glycerol waste while utilizing carbon dioxide is successfully demonstrated. However, by-product formation and energy efficiency challenges remain to be overcome for economic viability as the future “green” industrial production of valuable glycerol carbonate. While this discovery of the alternative glycerol electrochemical carbonatation has shed some light into the possible reaction mechanism, further mechanistic study is needed for better understanding of the reaction mechanism. 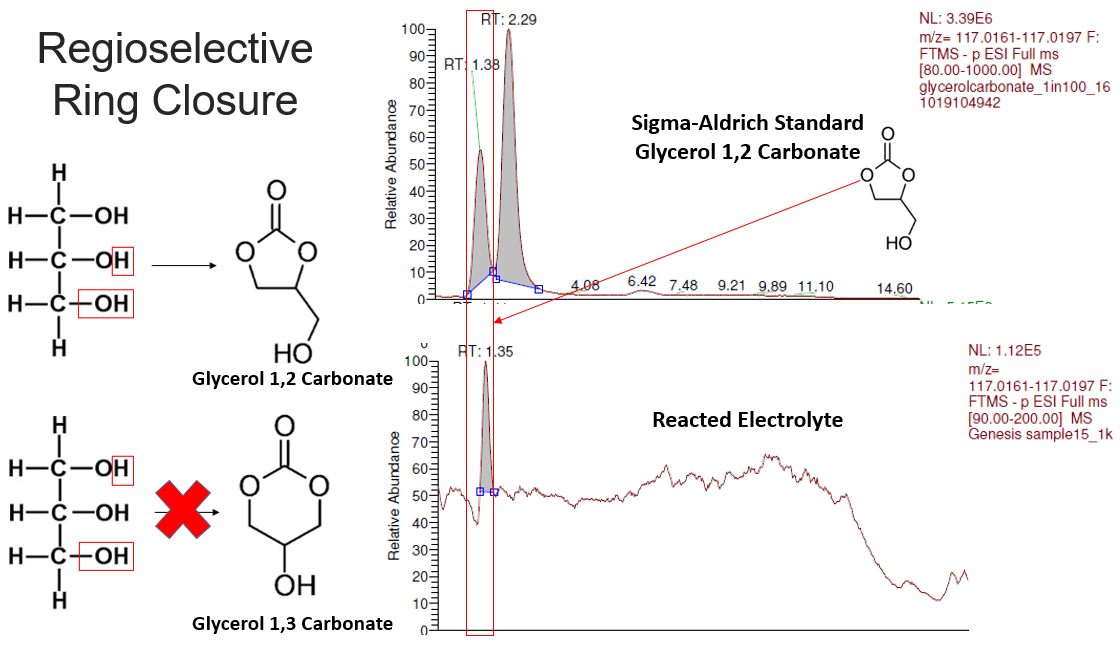