However, many challenges remain in manufacturing and fundamental understanding of this technology. We previously developed a fully coupled electro-chemo-mechanical model that contributes to the mesoscale optimization of composite solid-state electrodes [5]. In particular, it guides the understanding of how to overcome the inherent mechanical degradation of ASSBs [6]. Degradation phenomena are not well-understood or predicted in LIBs, in part because they require detailed modeling of the microstructure. Local features and defects are the primary drivers of failure in most materials and systems. By modeling inhomogeneities at different length scales we push the understanding of electrochemical systems beyond the limits achieved with macro-homogeneous models.

Electro-chemo-fracture-mechanics (ECFM) and its implications for mechanical and device reliability is the primary focus of this research [6]. Intercalation-induced strains and stress-driven diffusion are phenomena observed in most electrode materials and are a tangible effect of the electro-chemo-mechanical coupling. For instance, the moderate (10% in graphite) or large (300% in silicon) volume changes associated with Li intercalation in negative electrode materials lead to mechanical stress and fracture. Mechanical degradation is more severe in systems where the chemical expansion is large [7], or where it is mechanically constrained, such as in all-solid-state batteries [8, 6].

Our finite element model predicts that solid-state composite negative electrodes will fracture during charging of the battery. Even when electrodes are, on average, under compression they are still vulnerable to mechanical degradation.

Microstructure inhomogeneities, such as particle misalignment and non-smooth surfaces, are sufficient to cause tensile and shear stress to arise within the SE matrix. This result has strong implications for the transport properties of the electrode. Fracture within a solid Li-ion conductor has the effect of cutting off diffusion paths for lithium.

Consequences of mechanical damage on an electrode’s transport properties will also be discussed. In particular we illustrate via random-walk analysis how micro-cracking of the solid electrolyte region increases the tortuosity by a significant amount, especially in densely packed microstructures.

The work was supported by the grant DE-SC0002633 funded by the U.S. Department of Energy, Office of Science.

[7] G. Bucci, S. P. Nadimpalli, V. A. Sethuraman, A. F. Bower, and P. R. Guduru, “Measurement and modeling of the mechanical and electrochemical response of amorphous Si thin film electrodes during cyclic lithiation”, Journal of the Mechanics and Physics of Solids, vol. 62, pp. 276-294, 2014 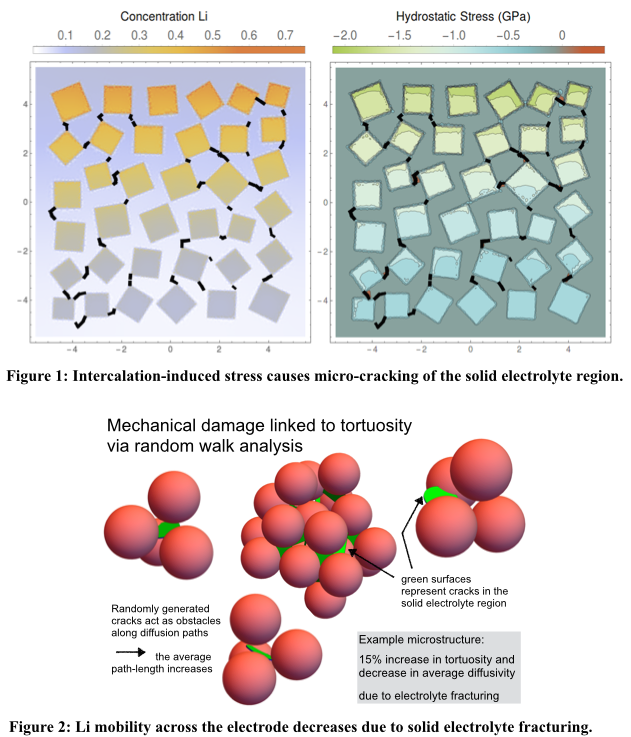