Under uniform thermal conditions, the in-situ internal current/State of Charge (SOC) distributions within a segmented-cathode (LiFePO4) cell have been measured by Zhang et al. [3]. Yang et al. studied the non-uniform SOC buildup between two 18650 LiFePO4 cells connected in parallel, where each cell was held at a different temperature [4]. Klein et. al. studied the non-uniform temperature effects on the bulk cell resistance under constant current pulses and dynamic current charge-depleting cases for a LiNiMnCo pouch cell [5].

This study presents the non-uniform temperature effects on in-situ current/SOC distributions among modules of five parallel-connected cells. Two commercially available 18650 cell chemistries were used; LiFePO4/Graphite (LFP) and LiNiMnCo/Graphite (NMC). For each chemistry, the five cells were connected in parallel with a current measuring shunt in series with each cell. The test system is illustrated in Figure 1a, and the module is in Figure 1b. Average module temperatures of 15, 25, and 35°C were used with temperature differences across the module being controlled to 0, 5, 10, and 20°C. Direct-current pulse tests were performed at 20, 50, and 80% SOC using 10sec pulses at constant C/5, C/2, 1C, and 2C-rates. Additionally, C/5, C/2, and 1C-rate constant current full-capacity discharges were performed under the same thermal conditions to observe the effects of non-uniform SOC among the cells.

The pulse results indicate that the LFP cell resistance has a lower temperature sensitivity than the NMC, and therefore experiences less current non-uniformity for the same amount of temperature non-uniformity. Larger current non-uniformity is observed at lower average temperatures, where the resistance is more temperature sensitive. The current distribution develops quickly (i.e., <2sec) and remains fairly constant during the 10sec pulse. However, the constant current full discharge results are quite different. Figure 1c-e plots the measured normalized current for the left/middle/right (cold/mean/hot) LFP cells for the average module temperature case of 25°C and the C/5, C/2, and 1C-rates, respectively. The instantaneous current distributions measured at the same average module SOC as the pulse tests are more uniform in the full capacity discharge tests. Therefore, the amount of maximum non-uniform SOC is lower than would be expected from extrapolating the pulse test current distribution results. Additionally, the NMC unit, which had a larger current distribution in the pulse testing compared to LFP, has a substantially lower current-distribution than the LFP unit for the full-capacity discharges. Finally, using the measured SOC profiles for each cell, a tolerable amount of temperature uniformity for each chemistry is interpolated from the results. Figures 1f and 1g present these results for two maximum tolerable SOC non-uniformities of 2% and 5%. The NMC chemistry provides a higher tolerance to temperature non-uniformity for a given SOC non-uniformity tolerance, as compared to the LFP chemistry. The results of this study are aimed at aiding both the validation of spatially resolved models, and to quantify the thermal non-uniformity targets for these common commercially available Lithium-ion cell chemistries. 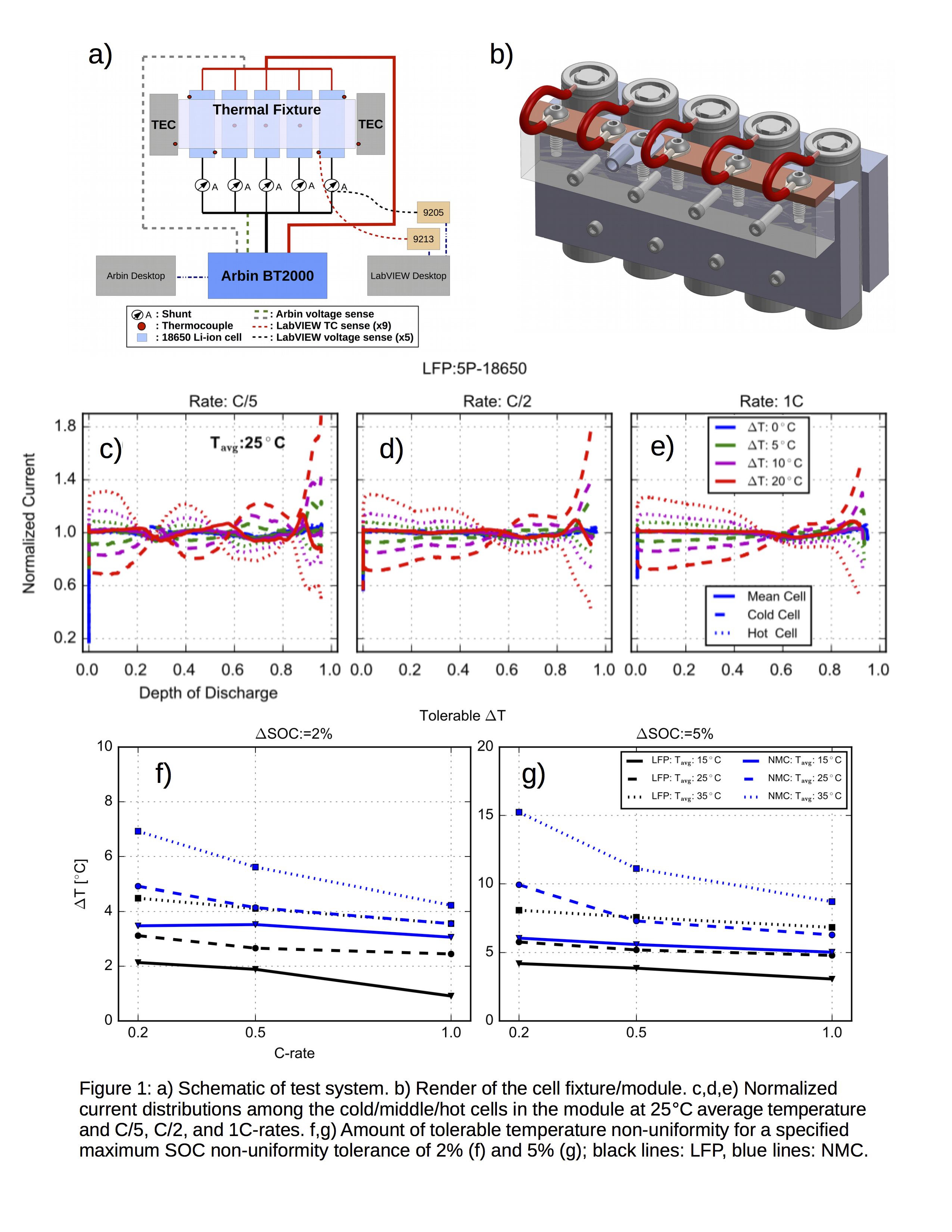