126
Determination of Mechanical Properties of Battery Films from Acoustic Measurements

Grand Salon C - Section 15 (Hilton New Orleans Riverside)
K. L. Dallon, M. Wray, D. R. Wheeler, and B. A. Mazzeo (Brigham Young University)
Measuring the mechanical properties of lithium-ion battery films, such as thickness and elasticity, is important for predicting and improving homogeneity of the film and performance of the battery. Problems with film heterogeneity could be identified and addressed early on through accurate, non-destructive inspection of the electrode as it is being manufactured. There are several techniques currently used to measure the mechanical characteristics of films, including nanoindentation and laser-induced surface acoustic waves (SAW). However, their use for analyzing battery electrodes is fairly limited.

This research investigates the use of acoustic measurements as an alternative means of non-destructive quality control that could be adapted for on-line use. Mechanical properties of thin films, including elastic modulus and thickness, have been determined using SAW [1,2]. Additionally, acoustic time-of-flight measurements have been taken on complete battery cells to find the state of charge [3]. Here we report on our efforts to measure mechanical properties with SAW. A film under tension is excited to produce a wave. This wave is measured at multiple points along the film to determine the speed of the wave. Because wave dispersion is based on properties such as elasticity and density, we can calculate mechanical properties of the film from the wave speed measurements.

Preliminary results indicate that acoustic tests can demonstrate observable differences between films with different properties, and that changes in the stiffness of the film (such as what happens during the drying process for battery films) can also be detected as a difference in wave speed.

This work was supported by the U.S. Department of Energy through the BMR program.

Figure: Illustration of apparatus for wave speed measurements of a film. 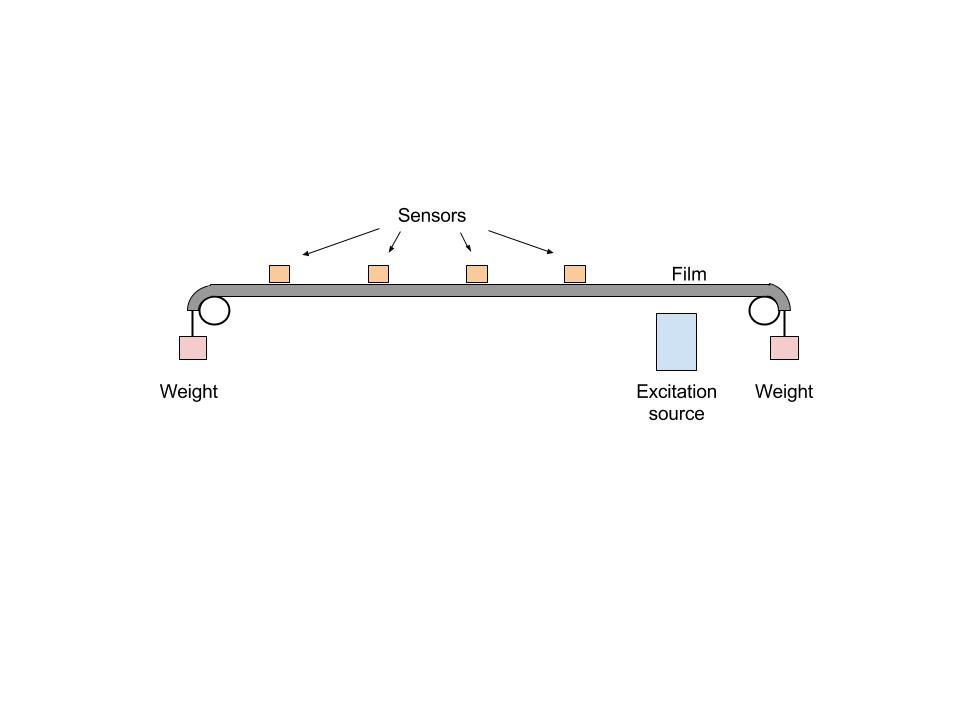