Grand Salon D - Section 19 (Hilton New Orleans Riverside)
S. Kuwabata (AIST, Graduate School of Engineering, Osaka University), R. Izumi, T. Tsuda (Graduate School of Engineering, Osaka University), and T. Torimoto (Graduate School of Engineering, Nagoya University)
In our previous studis, we have developed the ways to synthesize Pt nanoparticles by magnetron sputtering onto ionic liquid (IL) and to adsorb them on carbon materials by mixing the Pt-dispersed IL and the carbon powder on heating [1-3]. Furthermore, it was found that the prepared carbon-supported Pt nanoparticles possess distinct electrocatalytic behavior toward the oxygen reduction with the four-electron reaction. Furthermore, its durability is a little better than the commertially available carbon-supported Pt catalyst [4,5]. Several analyses of the prepared catalyst revealed that IL used certainly existed between Pt nanoparticles and the surface of the carbon supporter as an adhesive agent. It was then speculated that the prevention of direct touch between Pt and carbon suppress the oxidation of carbon catalyzed by Pt, resulting in the better durability. In order to know such the mechanism in detail, we began the present study using the protonic ionic liquids (PILs).

PILs have been investigated as electrolytes in which free protons are available as ionic carriers [6]. Watanabe et al. have reported that calcination of PILs result in graphitization of the liquids with high yeild [7-8]. This fascinate feature let us use PILs as the adhesive agents for preparation of the Pt nanoparticle-carbon material. Two PILs were employed in this study; [DPA][HSO4] and [DEMA][HSO4] were used in this study. Since [DPA][HSO4], which is graphitizaed with very high yeild, is solid at room temperature, this cannot be used as a medium for preparation of Pt nanoparticles by sputtering. Therefore, we first prepared Pt nanoparticle-dispersed [DEMA][HSO4] and some amount of [DPA][HSO4] and carbon powder (Vulcan) were added before heating at 473 K. 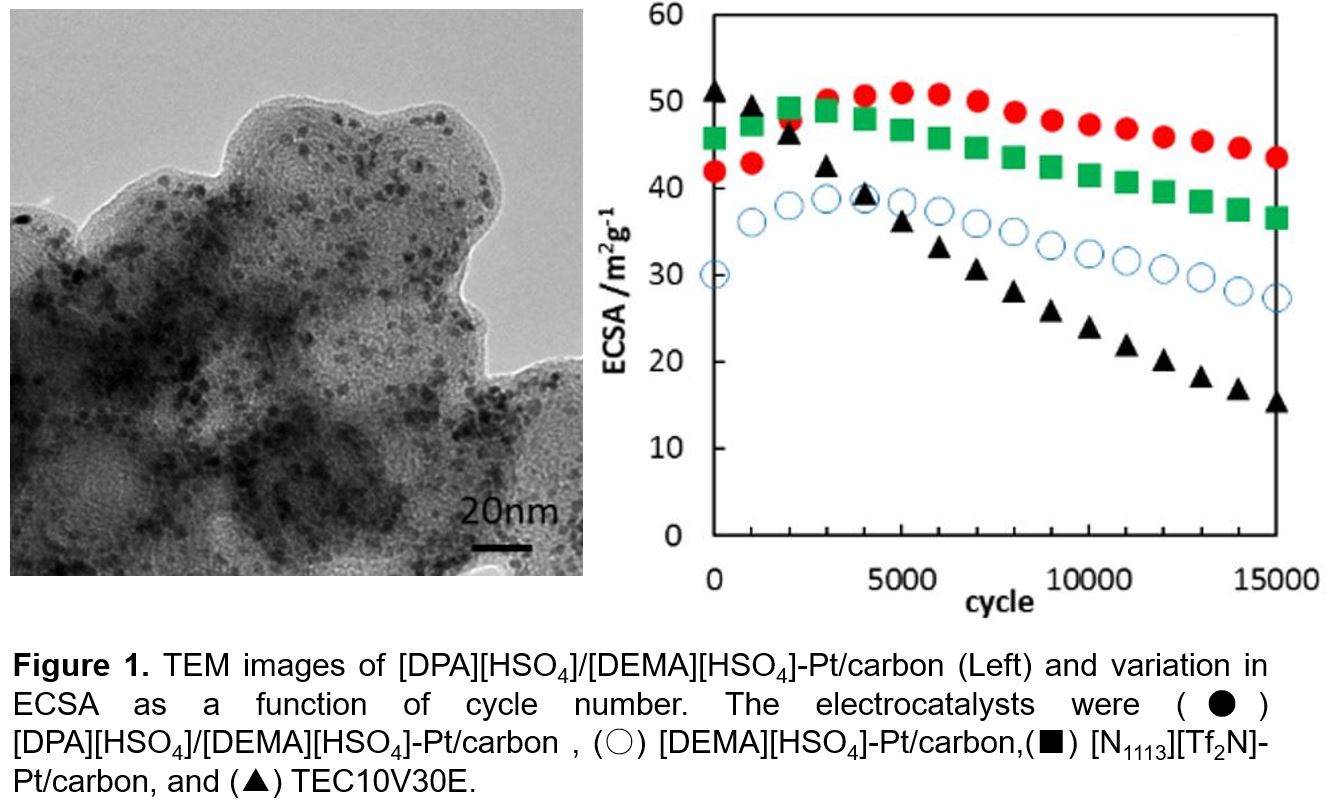