The ability to detect multiple neurotransmitters simultaneously can provide the critical information about many psychiatric disorders such as Parkinson's Disease and Alzheimer's Disease. Electrochemical detection method is one of the most effective techniques for neurotransmitter sensing because of the high sensitivity and portability. However, the similar redox potential among the neurotransmitters cause poor selectivity in detection. Molecularly imprinting technique provides a highly selective method for neurotransmitters sensing. Figure 1 illustrates the basic principle for MIP technique. Polypyrrole (PPy) was used as a functional polymer because of the good conductivity and ease of synthesis. Multi-walled carbon nanotubes (MWCNTs) were introduced as a platform (or a template) for PPy growth because of the strong affinity between MWCNTs and the PPy as well as the excellent electrical property. DA and NE molecules served as templates, and each type of MIP was synthesized in a similar way. The template molecule was embedded inside the PPy layers. After being overoxidized with several cyclic voltammetry (CV) cycles, the templates were removed from the PPy layer which created cavities corresponding to the shape and size of the analyte. Therefore, the MIPs are able to enhance the sensitivity and selectivity of the sensor. Although there have been recent work on MIP-based sensors, most of them have focused on single analyte detection. Therefore, a novel method for multi-analyte sensing is urgently needed for commercial applications. In order to achieve this goal, this work presents a LabVIEW-based multi-species detection system. Figure 2 shows the design of the circuit for the potentiostat system. The sensor consists of two working electrodes (WE1 and WE2), a reference electrode (RE), and a counter electrode (CE). The generated DPV signal was connected to the two working electrodes, and MIPs were deposited on the working electrode for detection. The MIP synthesis method was designed as follows, H2O2 was added to the mixture of pyrrole monomer, CNT, FeCl2, and template solutions (either DA,or NE) at room temperature. After the MIPs was fully synthesized, deionized water was used to wash out the unreacted substance. Finally, the MIPs were overoxidized in phosphate buffered saline (PBS 1X) solution to remove the embedded template molecules.

Figure 3 shows the DPV responses for (a) DA-imprinted device (DA-MIP) and (b) NE-imprinted device (NE-MIP) when exposed to various concentrations of DA. DA-MIP and NE-MIP were connected to WE1 and WE2, respectively. Although oxidation peaks were observed in both sensors, the DA-MIP device produced a greater sensitivity at 0.02V. However, NE-MIP device exhibited better performance at 0.26V when two types of MIP device (c), (d) were exposed to various concentrations of NE solutions. Figure 4 shows a set of calibration curves for both DA-MIP and NE-MIP incubated in DA figures (a – c), and NE (d – f) solutions. Each sensor exhibited higher sensitivity for their respective target analyte. Also, the sensitivity of the sensor can be affected by the present of other species, the performance of the sensors varies when exposed to different mixtures. Figure 5 summarizes the multi-analyte performance for two MIP devices simultaneously exposed to a mixture of two analyte. The slope of the calibration curve was obtained for each combination of mixtures, where the slope indicated its sensitivity. The response of DA-MIP device was significantly higher than the NE-MIP device for all cases when the concentration of DA was varied. On the other hand, NE-MIP device usually possesses better sensitivity than the DA-MIP device when the concentration of NE was varied. In summary, the selectivity of both MIP devices toward their own species have been confirmed, and the results demonstrate that the molecularly imprinted cavities inside the PPy nanofibers can selectively measure the quantity of the target analyte even in the presence of other interfering molecules. We envision that a highly selective multi-analyte detection of a large number of analytes is also possible by implementing multiple types of MIP-based electrochemical sensors on a single chip. 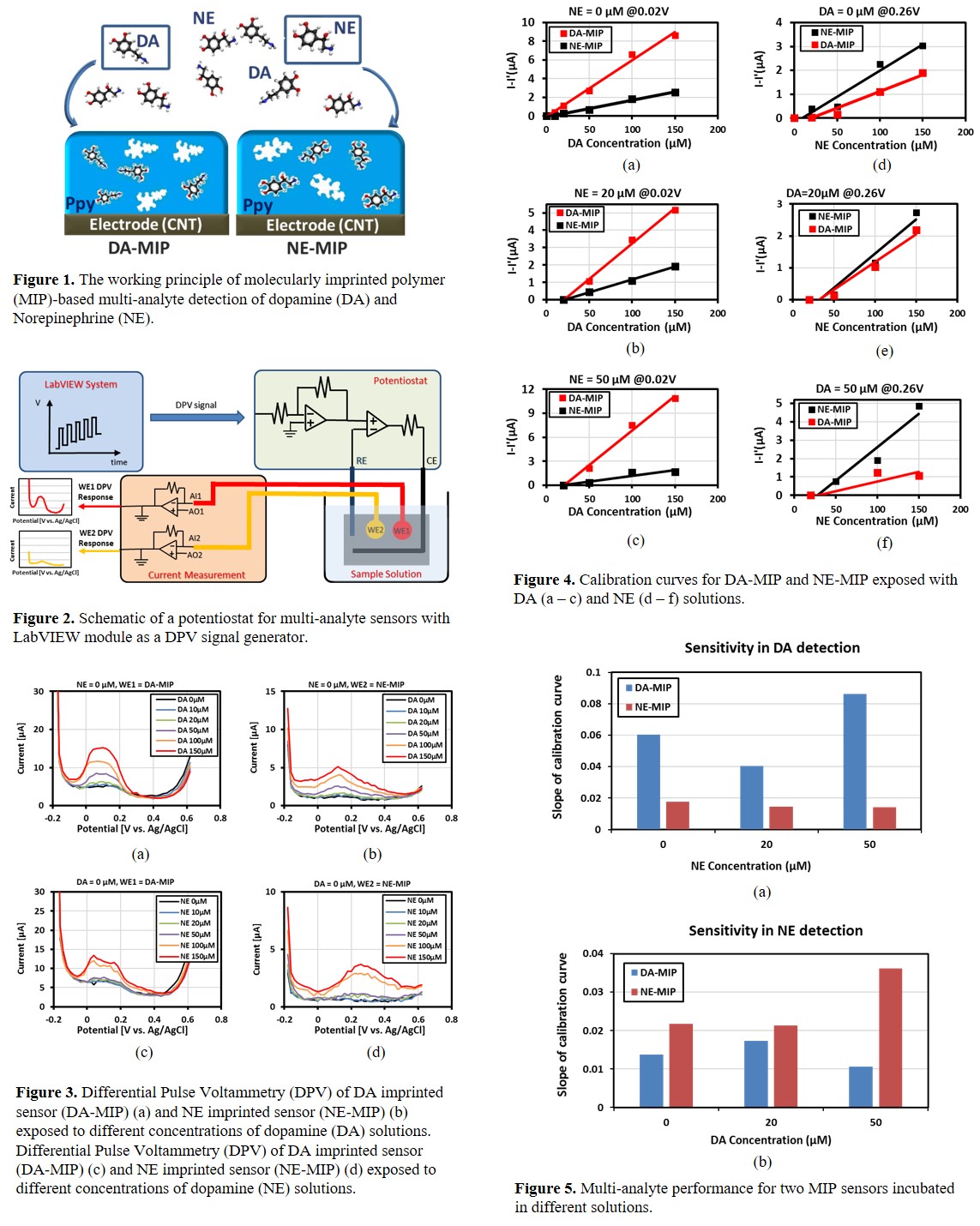