Grand Salon A - Section 4 (Hilton New Orleans Riverside)
N. I. Khan and E. Song (University of New Hampshire)
An aptamer is a single-stranded DNA (or an RNA)-based oligonucleotide used as a synthetic molecular recognition element in biosensors. Its many advantages include high affinity and binding efficiency, chemical stability, resistance to harsh environment without losing its bioactivity, mass producibility and reusability which make aptamers superior to the natural receptors such as antibodies and enzymes. Aptamers have found their use in the selective detection of a broad range analytes including proteins, peptides, amino acids, drugs, metal ions, and even whole cells.

One of the most promising uses of aptamers is in the electrochemical detection of biomarkers for point-of-care (POC) diagnostics for diseases. In order to utilize such aptamers as molecular receptors in the electrochemical sensors, they must be securely immobilized to the surface of the working electrode so that the specific binding between the target and the aptamer can be transduced into a measurable electrical signal. Sophisticated surface chemistries such as thiol-gold binding or carbodiimide cross-linker chemistry (i.e. EDC/NHS coupling) are often used to covalently attach aptamers to the electrodes. However, such surface chemistries make the fabrication of the aptamer-based sensors difficult in terms of mass production or microscale aptamer array development. In our approach, a simpler immobilization technique is proposed to functionalize the electrode with aptamers.

In this work, we make use of the pi-pi stacking forces between carbon nanotubes (CNTs) and aptamers to immobilize the aptamers onto the electrode surface. The fabrication procedure is illustrated in Figure 1. First, CNT-aptamer liquid suspension is prepared by mixing CNT and aptamers in deionized water and sonicating until the mixture is fully dispersed. A small droplet of the prepared solution is then deposited on the working electrode of the screen-printed carbon electrode (SPCE) and is left to dry a hot plate. The detection principle of the biosensor is illustrated in Figure 2 where the lysozyme-binding aptamers were used. Due to the strong affinity between a CNT and a DNA, aptamers tend to wrap around the CNTs as the hydrophobic DNA bases of the aptamer interact with the sidewall of the CNTs via pi-stacking. Hence, as shown in Figure 2(a), the charge transfer from the redox probe to the electrode is hindered due to the negatively charged phosphate backbone of the oligonucleotide wrapping around the CNT, hence causing electrical insulation. As the SPCEs are exposed to the target protein (lysozyme), the aptamer unbinds itself (partially or entirely) from the CNT due to the conformational changes caused by the specific recognition of lysozyme as illustrated in Figure 2(b). This enhances the charge transfer rate from the redox probe in the solution to the electrode.

Figure 3 shows the Nyquist plots obtained from the electrochemical impedance spectroscopy (EIS) measurements before and after incubation with the solution containing 0, 1, 5, and 10 µg/mL of lysozyme. The radius of the semicircle in the plot indicates the charge transfer resistance of the redox probe (ferro/ferricyanide) at the electrode. The results show that the aptamer-lysozyme binding causes a decrease in the charge transfer resistance (Rct) because of the conformational change of the aptamers. Figure 4(a) shows the post-lysozyme exposure Nyquist curves for different lysozyme concentrations which represents that the degree of Rct change correlates with the lysozyme concentration. Figure 4 (b) shows the calibration curve of the EIS-based lysozyme sensor under exposure to various concentrations of 3 different types of proteins. The plot shows that Rct change is proportional to the lysozyme concentration whereas the other two proteins does not cause significant Rct change.

We also characterized the selectivity of our lysozyme biosensor against other protein biomarkers such as thrombin and bovine serum albumin (BSA). Figure 5 presents the relative response (charge transfer resistance) for the three types of proteins with concentrations of 1, 5, and 10 µg/mL. The sensor response is most pronounced for the lysozyme detection while the other two proteins yield minimal responses. This high specificity arises from the high affinity of the anti-lysozyme aptamer. An increase in the charge transfer resistance for BSA at 10 µg/mL can be attributed to the non-specific adsorption to the electrode which further increases the charge transfer resistance of the redox probe at the electrode.

The proposed aptamer immobilization technique in conjunction with EIS can be an effective method in developing a simple and low-cost biomarker sensor for point-of-care testing. 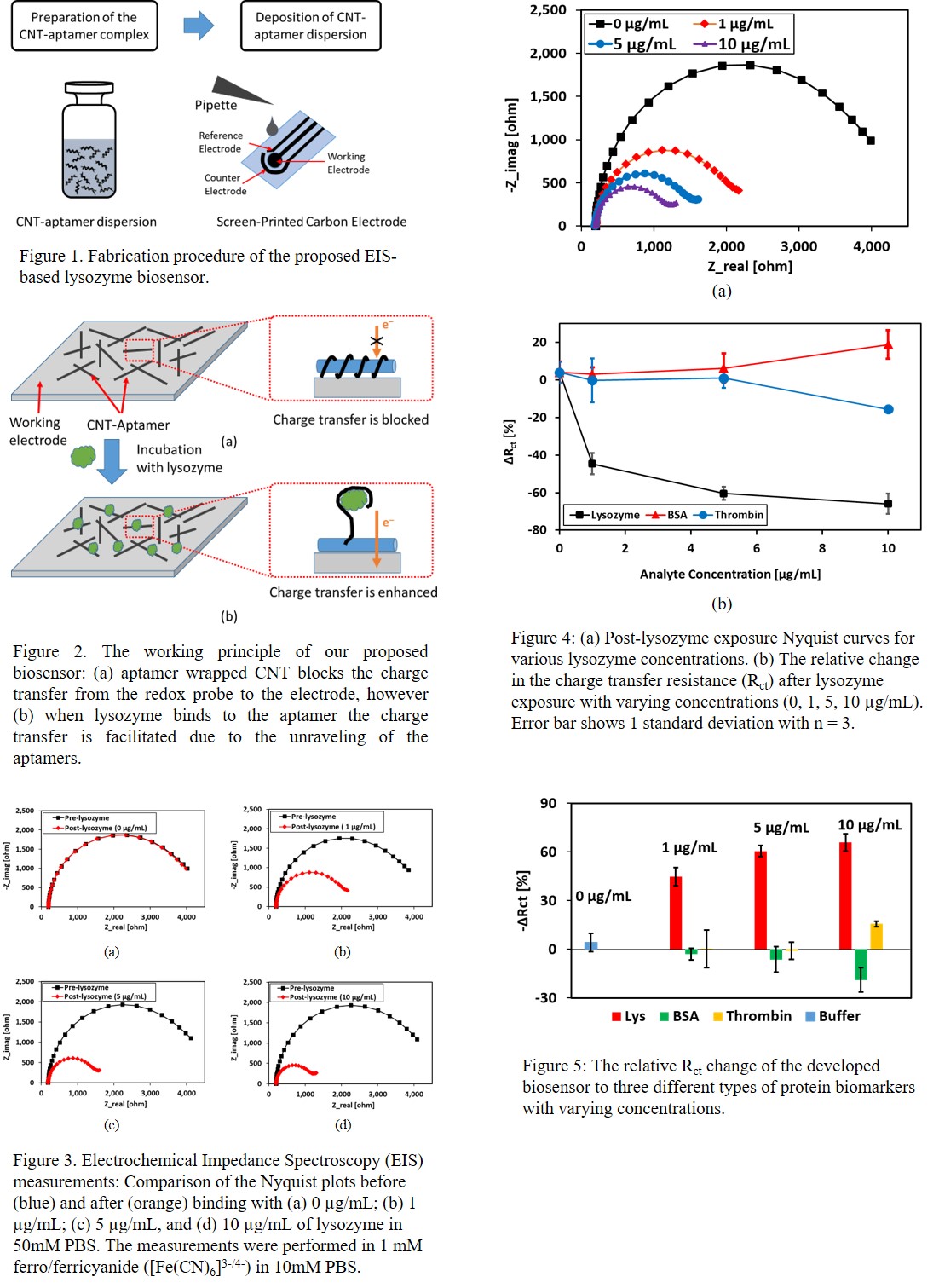