Herein, we report about fused-porphyrin terbium complexes having two or more terbium ions and several porphyrin cores as ligands. Since these complexes have more than two protons, they have more diversity in electronic structures than single core complexes. We have successfully synthesized fused-porphyrin terbium triple-decker complexes ([Tb2]) in protonated form (diprotonated-[Tb2]), anionic form (dianionic-[Tb2]), and radical form (biradical-[Tb2]). The structural, spectroscopic and magnetic properties of these complexes were evaluated to show unique character of these complexes. The biradical-[Tb2] has extraordinarily small energy gap (~2700 nm). Switching of SMM property by the presence and absence of protons was also confirmed in [Tb2]. The relatively high blocking temperature of dianionic-[Tb2] could be attributed to its highly symmetrical molecular structure. In addition, SMM property of biradical-[Tb2] was almost similar to that of radical-Tb(TPP)2, which will enable highly conductive SMM wire of terbium multiple-decker complex ie. [Tb4], because of the small energy gap. 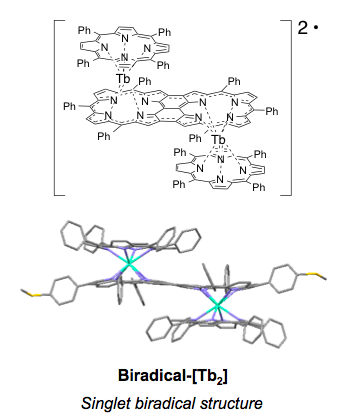