Chesapeake F (Gaylord National Resort and Convention Center)
Y. Furubayashi (RNBS, Hiroshima University), T. Tanehira (Mazda Motor Corporation, TherMAT), A. Yamamoto (AIST), K. Yonemori, S. Miyoshi (Mazda Motor Corporation, TherMAT), and S. I. Kuroki (RNBS, Hiroshima University)
All of power devices release high heat energy. In order to transport heat from them by a Peltier device, the direction of the heat flow should be taken into account. Because the temperature of heat drain is normally lower than that of the power devices, the direction of its Peltier effect is the same as that of thermal diffusion. Therefore, if the device consists of n Peltier blocks with its Seebeck coefficient S and thermal conductance KP, the total heat transport qall under an operation current IP with a temperature difference ΔT can be written as qall = n|S|TIP − (1/2)RPIP2 + KPΔT. The parameters T and RP denote an average absolute temperature and an electrical resistance of the Peltier device, respectively. This means that both higher S and higher ΔT are required.

Another important factor is a response time (τP) of Peltier effect. Most of power devices release heat with high fluctuations. To flatten the time dependence of the temperature of the power chip, the τP should be small enough to follow the heat fluctuations. However, even for well-known Bi2Te3 systems, only a few reports have discussed its τP. Therefore, we studied a transient state of Peltier effect for a piece of n-type single crystalline Si, within a few seconds after the device was switched on.

For estimating transient behavior, we used the single crystalline n-Si (100) (100 mm2 × 0.625 mm) with both of surfaces covered with Al/Pt/PtSix films. Silicon crystal (Si) has a large Seebeck coefficient and a high thermal conductivity.
During measurements, the n-Si was sandwiched by a couple of gold blocks connected to a current source. Voltage and temperature were measured near an interface between the block and the n-Si. One of the blocks was connected to ceramic heater and the other to a refrigerator. In addition, to estimate an operation of the n-Si on a 4H-SiC-based power device, the Peltier effect with a 4H-SiC substrate was tested. A 4H-SiC substrate (100 mm2  × 0.35 mmt) and a strip of Cu were inserted between the gold block at the heat source and the n-Si. Because this 4H-SiC is an electric insulator, the current path is through the right Cu strip, right gold block, the n-Si, and the center Cu strip. InGa-based liquid metal was painted between all of the components.

For deriving thermoelectric parameters, we analyzed time dependence of the difference between both sides of the n-Si, ΔTP(t) (≡ TD(t) − TS(t) − ΔT(0); where TD(t) and TS(t) denote the temperatures of heat drain and source, respectively), based on a series thermal circuit. We employed the expression of ΔTP(t) ≈ qPRHSi{1−exp(−t / τP)} + qURHU{1−exp(−t / RHUCHU)} − (qD / CHD)t, where qP (≡ STIP) and τP denote an active heat transport and a response time by the Peltier effect, respectively. The second and third terms show an expansion and a reduction of ΔTP(t) by thermal diffusion, respectively. We found the equation of ΔTP(t) successfully represented all of the experimental ΔTP(t). The fitted parameters were summarized in Fig 1 (a) and (b). The Seebeck coefficients derived without and with SiC were −490 ± 20 μV/K and −571 ± 12 μV/K, respectively, which were consistent with that reported previously. The response time τP obtained experimentally without and with SiC were ~ 0.1 sec and 0.15 sec, respectively. These short response time would enable a quick cooling of a heat source such as inverters. Finally, a simple simulation revealed that the parameters of ΔTP(t = 5 sec) and τP for a bulk Bi2Te3 with the same arrangement in this work were 10 K and 2.5 sec, respectively. This shows that Bi2Te3-based Peltier device is not suitable for cooling a power device.

Furthermore, as the second stage, the influence of metal electrodes on the thermoelectric properties of silicon has been evaluated. Titanium, aluminum, and platinum were used as an electrode of n-Si. Some of them were sintered to form films of silicides. A conventional measurements of voltage/temperature difference during steady state revealed that their Seebeck coefficient strongly depends on all of the composition, thickness, and sintering temperature.

This research is supported by “Thermal Management Materials and Technology Research Association (TherMAT)” in New Energy and Industrial Technology Development Organization of Japan. 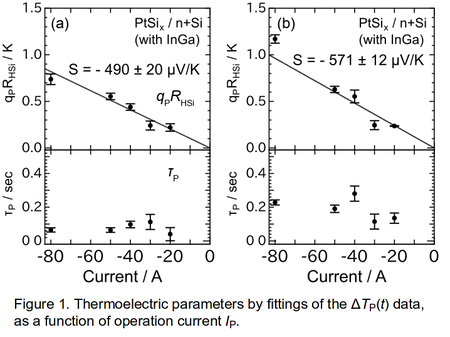