Besides 3D structuring, materials design of the LIB electrodes is paramount to achieve higher power and higher energy densities, beyond traditional electrode materials such as LiCoO2, and LiMnO2which are limited to volumetric capacities of 550-700mAh/cm³. Traditionally, the main focus of materials development for batteries has been on crystalline compounds. However, several indications exist that higher energy and power density can be found in amorphous materials. ALD is not only excellently suited to deposit conformal films, but also able to grow high-quality amorphous films at low deposition temperatures, enabling the study of amorphous thin-film electrodes.

In this work, ALD of vanadium oxides for applications as lithium-ion electrodes is envisioned. Vanadium oxides were amongst the first materials to be studied as LIB cathodes, but were never commercialised. V2O5 is a well-known LIB electrode, but the rather low volumetric energy density (when storing one lithium) or poor cyclability (when storing 2-3 lithium ions) have prevented its large-scale commercialisation in the past. Here, we demonstrate the ALD deposition of amorphous and crystalline V2O5, and two ‘flavours’ of amorphous VO2, from a single vanadium precursor (Tetrakis[ethylmethylamino] vanadium). We demonstrate the crystallisation of these films into crystalline films in the Wadsley series, and are able to unravel the influence of initial ALD process, atmosphere, temperature and substrate on the crystallization and oxidation of the VO2 films. With this in mind, we are able to obtain phase-pure crystalline vanadium oxides in the whole Wadsley series (VO2–V6O13–V4O9–V3O7–V2O5), which show very high energy densities up to more than double that of typical bulk cathodes (1380mAh/cm³ for V4O9).

The amorphous initial states (amorphous VO2 and V2O5) are often not considered due to their lack of a clearly defined electrode potential. However, building on the nature of ALD to grow high-purity amorphous films, these were also investigated here. It was found that, besides also having very high capacities, their kinetics are excellent.

Finally, the best candidates were examined on an ALD Pt-coated silicon micropillar array as 3D-structured thin-film electrodes. The 20x surface enhancement of the micropillar substrate enhanced the footprint capacity of the 40nm films from approximately 2-5µAh/cm² to 40-100µAh/cm², with the highest capacity for amorphous VO2(>100µAh/cm² for the 40nm film), while at the same time maintaining the excellent thin-film kinetics of the planar films, in effect simultaneously demonstrating the potential of ALD to deposit 3D thin-film electrodes as well as a tool to study amorphous and crystalline films.

In conclusion, a wide range of crystalline and amorphous vanadium oxides were demonstrated from a single vanadium-precursor based ALD process. All films were examined as potential lithium-ion battery electrodes, and showed promise of very high volumetric capacities. In particular, the amorphous films and the crystalline VO2 (B) not only displayed very high capacities, but also excellent kinetics, enabling both high-energy and high-power electrodes. 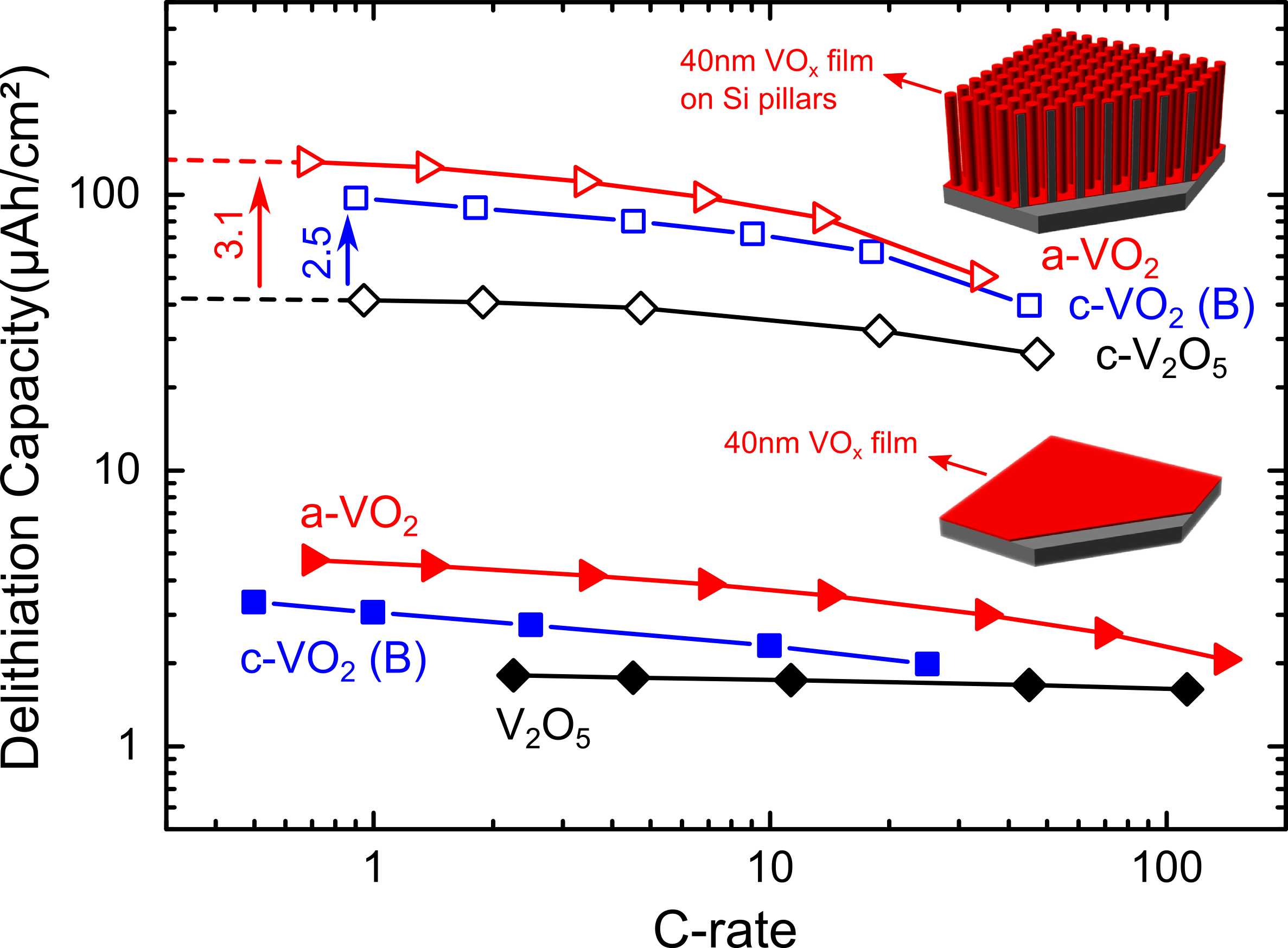