Lithium-ion batteries using Li4Ti5O12 anode realize excellent performance of power, fast-charge, life, and safety [1]. However, the theoretical capacity of LTO is low (175 mAh/g) compared to that of graphite anode. We have been developing TiNb2O7 (TNO) as high-capacity anode material in order to replace the LTO anode [2]. The theoretical capacity of TNO is 387.6 mAh/g according to 5 Li insertion per formula unit, regarding electron transfer about Nb5+/Nb3+, Ti4+/Ti3+redox couples. Only a few researchers have reported on a large storage of more than 4 Li insertion (310 mAh/g). Hence, we report the lithium storage mechanism and electrode performance of hydrothermally synthesized TNO particles with the large storage of more than 4 Li insertion.

TNO particle samples were synthesized by hydrothermal method. Niobium (V) chloride was dissolved in ethanol, and become mixed with Titanium (IV) oxysulfate dissolved in dilute sulfuric acid. Ammonia solution was slowly dropped to mixed solution with stirring until pH values were changed to 8. The mixture was transferred to autoclave, and gave a thermal treatment for 5 hours at 160℃. After that, the mixture was washed with deionized water and was frozen and dried in vacuum. The precursor samples were heated from 700℃ to 1000℃ for 30min, and furnace cooled. To compare with electrode performance of TNO, we also prepared TNO particle sample by solid state reaction using conventional method. Electrochemical properties were carried out using a three-electrode cell with synthesized TNO anodes as working electrodes, and Li foils as reference and counter electrodes. The structural changes of TNO particles as lithium insertion proceeded were characterized using ex-situ XRD, and XAFS measurements at the BL16B2 beam line in the SPring-8 synchrotron radiation research facility.

Fig.1 shows charge (Li insertion) - discharge (Li extraction) curves of TNO electrodes at the first cycle. The TNO particles prepared by solid state reaction had a reversible capacity of 306 mAh/g, which was correspond to 3.95 of Li insertion amount per formula unit. On the other hand, hydrothermally synthesized TNO particles heated at 1000℃ had a large reversible capacity of 341 mAh/g (4.40 of Li/ formula unit) by the increase in capacity below 1.0 V (vs.Li+/Li). The reversible capacity per volume calculated using the true density of TNO was 1481 mAh/cm3, which is twice higher than that of graphite anode. Fig.2 shows the dQ/dV-V plots at the first discharge curves. The hydrothermally synthesized TNO anode had an additional peak around 1.0 V (vs. Li+/Li), which was significantly different from solid state reaction particles. Primary particle size (ca.100 nm) of hydrothermally synthesized TNO was much smaller than that (ca. 1 μm) of TNO synthesized by solid state reaction as shown in Fig.3. We consider that a short diffusion length of lithium ions, a large surface area, and highly crystallization of thermally synthesized TNO particle would make it possible to insert into a storage site of lithium ions above 4.0 per formula unit. We will give a description about the Li insertion and extraction mechanism of TNO at below 1.0 V (vs. Li+/Li) by using electrochemical analysis, ex-situ XRD, and XAFS measurements. 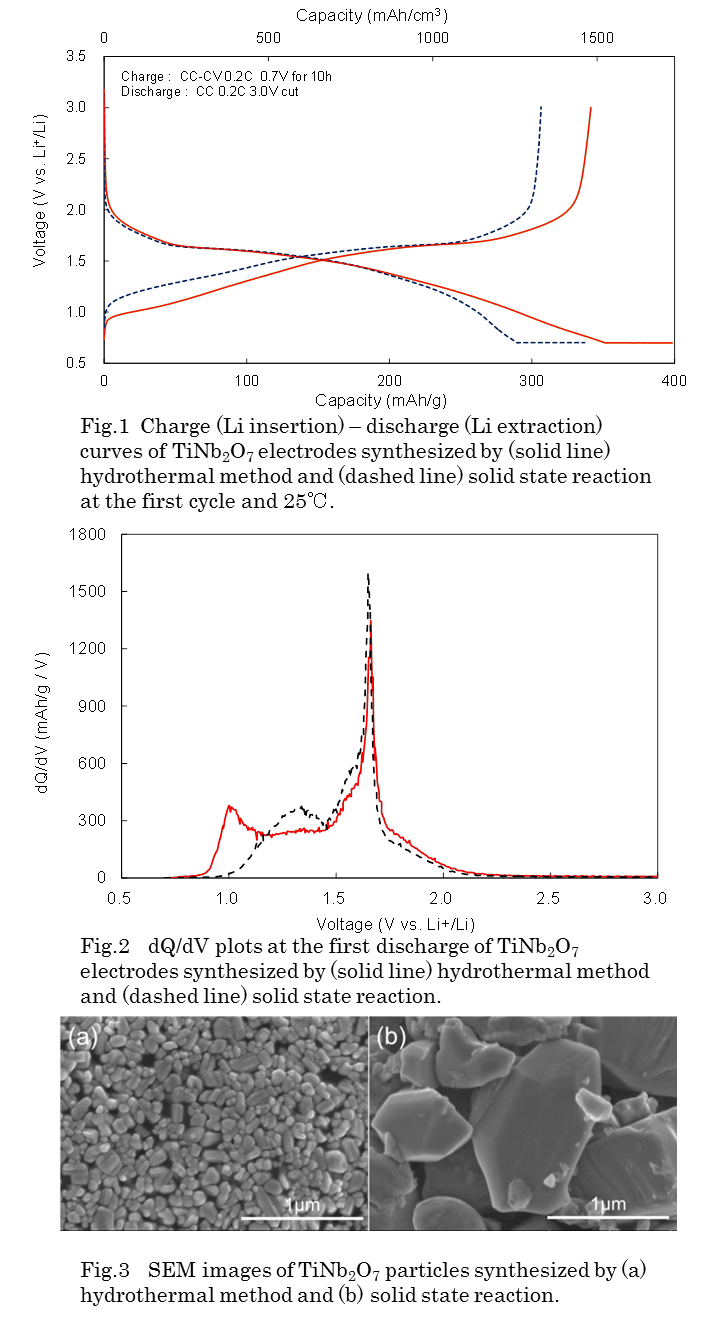